I have vague memories of a movie I saw as a kid in the 90's, the movie itself might have been from outside the US and from earlier than the 90's (I'd say back as far as maybe early 80's), would not surprise me if it was Italian, for example. Relatively low budget, looked kind of "grimy" from what I recall. It involved a deadly virus that was spreading rapidly, and the main guy and girl (who were some type of caucasian if I recall correctly, as in not asian or african) tried to escape infected people, who spewed virulent goo from most orifices, I remember thinking the movie was quite gross, but there might not have been much actual blood. Here's the (few) key moments I remember that might be the key to the answer:

The clearest and most unique memory I have is that someone was looking at a sample of the virus in a lab-setting, and the microscope view was shown on the screen. You could see cells (red blood cells possibly?) and a, if I recall correctly, cartoony animated virus monster thing that ate the cells. The animated style clashed heavily with the realistic looking blood cells.

Update (expanded description of scene): A lab setting is shown, looks quite basic, not high tech and sleek, more like a school lab. There's a microscope on a bench with a slide prepared with a sample of the virus, probably an infected blood sample. Someone (probably the main guy or girl) looked through the microscope. The scene above happens (cartoon monster etc), the person looking through the microscope is horrified/amazed/aghast. It's possible that some event occured, like the microscope-slide breaking, or microscope shaking a bit.

I remember that goo (or possibly blood + goo) spewed violently from the infected, possibly from the mouth and eyes, and they might even have melted eventually, or at least looked a bit melted.

What I'm certain it is not: Pontypool, Street trash

What I'm fairly certain it is not: The stuff, that Australian splatter movie from the 80's/90's about a disease/virus that made people randomly mutate and spew gore/slime (that one is quite similar though, but I'm 80% sure it's not the one, the cartoon virus scene is missing)

The name of the Australian splatter movie I'm referencing above is "Body melt", it is somewhat similar (especially the scene at the police station at the end), but most of the movie does not involve people spewing slime (it's more about random mutations, though a fair amount do involve slime), and there's no "cartoon virus eating blood cells"-scene (unless I somehow missed it, correct me if I'm wrong). If the movie had that scene then I would accept that as the correct answer and brush off the rest of the inaccuracies as me misremembering, but that key part is missing.

Another, very vague memory I have is that the main guy and girl are in some kind of underground facility/tunnel/cellar, and trying to remain undetected. They are detected by some guy, or just look at him from a hiding spot. The guy might have been middle eastern-looking, possibly in a uniform, he might have even had a fez (though this might just be my imagination here). Perhaps the movie is Turkish? In any case, he soon starts spewing slime/fluids from his mouth and eyes, possibly dying/melting and allowing our main guy and girl to escape.

Here's an addition regarding the movie "Flesh eating mothers" that's been put as an answer. I have now seen that movie and I am 99% certain that I've never seen it before. As a kid I was quite sensitive to blood and gore in the way that's depicted in that movie, so I'm pretty sure I would not have been able to stomach what's in that film. I remember watching the opening to Braindead at what must have been around the same age, and I had to turn that movie off since I just felt ice run through my spine at the sight of the gore scenes, and Flesh eating mothers has some pretty graphic gore in the same vein (cannibalism). The memories of the movie I have in my mind features scenes of people melting/spewing goo in a way that's similar to how the final gremlin melted in Gremlins after being bathed in sunlight and falling in the fountain. Eyes popping, skin melting, fluids shooting out, but not much actual blood and gore (though there might have been some, can't be sure).

However, there's the issue of the microscope scene. Flesh eating mothers contains a microscope scene with a cartoon virus that very well might be the scene I have in mind, it doesn't match exactly (the background is also animated and the cartoon monster is smaller than I remember), but unless there's another movie with a scene where a guy and a girl in a grimy environment look through a microscope and see a cartoon virus eating cells (which is unlikely), then that must be the scene. So I'm leaving the question open until the bounty is close to expiring, and unless someone comes in and gives me a perfect answer I'll just chalk up the other memories to me blurring different movies together.

Since we already have a partial match with the microscope scene, what I'm hoping for now is to tackle the other angle, i.e a movie where people get infected with a virus and then violently spew fluids from their mouth, their eyes going white and popping, possibly multicolored goo spewing out of them, and them possibly melting (again though, not Street trash or Body Melt). If by magic it also has a microscope scene, then that's a bonus, but not a must.

Final words: I'm accepting Flesh Eating Mothers as the answer. It doesn't match very well with what I had in my mind, but I very much doubt that there is another movie out there with a microscope/virus-scene that matches my description, so that must have been the movie I saw. Regarding the goo-spewing, it's possible that I'm mixing this movie up with some other movie, or that my child mind just interpreted the zombie makeup as their faces melting, and it's also possible that I partly covered my eyes during the gory scenes and interpreted what little I saw as people melting. 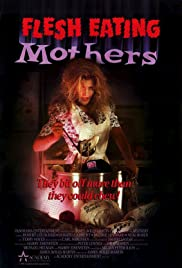 Suburban housewives turn into vicious cannibals after committing adultery with the neighborhood womanizer.

It does not match on those infected constantly spewing goo, but in several scenes, the eponymous flesh-eating mothers are spitting out food, blood, and flesh.

The trailer cued to the cartoon virus scene

Not the answer you're looking for? Browse other questions tagged story-identification movie virus or ask your own question.

6
Movie about possessed audio tape
15
Movie/TV series with a scene of spiky, black goo growing out of a lab container?
9
1980s/90s horror movie where a group of friends go to a house where monsters and contagious illness are waiting for them
3
Cartoon about people on a space mission investigating a zombie virus
1
1990s softcore sci-fi movie with a female cop that turns into a nymphomaniac, and Adam and Eve (or something like that) appearing near the end
11
Movie about two cops investigating and fighting with green-blooded, zombie-like people with superpowers
21
Help identifying movie where a virus sent from the future is encoded with a message