What clued Sleepy in on the Evil Queen's presence toward the end of Disney's “Snow White”?

Near the end of Snow White and the Seven Dwarfs (1937), the Evil Queen visits Snow White in the dwarfs' house while they have just gone to work in the mine, disguised as the old hag, with the intention of killing her.

The animals notice this and rush to fetch the dwarfs, but the latter don't understand why the animals "have gone crazy", trying to drag them back home.

Then suddenly, seemingly out of nowhere, Sleepy says:

Why would he say/think this? Is it just a pure lucky guess? Is it part of the classic fairy-tale, and thus included in the story just because of that, and it never made any sense from the beginning? Or am I missing some detail or logic? It bothers me that he says this "for no reason", since the rest of the story appears to make sense, at least in the context of a fairy-tale.

disney snow-white
Share
Improve this question
edited May 11 at 16:50

The dwarfs already knew the Queen was after Snow White, Sleepy was just the first to connect this with the animals’ behavior.

When the dwarfs first find Snow White, she begs them not to send her away, because if they do, the Queen will hurt her. The dwarfs have all heard of the Queen before. Grumpy in particular knows that the Queen knows witchcraft and magic.

Snow White: Please, don't send me away. If you do, she'll hurt me.

Dwarfs: Hurt you? Who will? Yes, who?

Snow White: My stepmother, the Queen!

Dwarfs: (surprised and horrified) The Queen?!

Grumpy: She's an old witch! I'm warning you. If the Queen finds her here, she'll swoop down and wreak her vengeance on us!

Snow White: But she doesn't know where I am.

Grumpy: She don't, right? She knows everything. She's full of black magic. She can even make herself invisible. Pfft!

Grumpy: Might be in this room right now.
- Snow White and the Seven Dwarfs (1937)

Before they leave, several of the dwarfs remind Snow White to be careful. They are all quite conscious that they are leaving Snow White alone, and therefore more vulnerable to the Queen. Doc reminds her the Queen knows witchcraft and to be careful of strangers.

Doc: Now don't forget, my dear. The-the old Queen's a sly one, complete with witchcraft. Then beware of strangers.

Bashful warns her to be careful because he doesn’t want anything to happen to her.

Bashful: Be awful careful, because if anything would happen to you, I…I…uh…
- Snow White and the Seven Dwarfs (1937)

Sneezy warns her, while stifling a sneeze, to watch out.

Sneezy: And be sure to watch out-

(a sneeze starts to brew in his nose)

And Grumpy warns her not to let anyone or anything in the house.

Grumpy: Now I'm warning you. Don't let nobody or nothing in the house.

Before they went to work, the dwarfs knew there was a chance that the Queen would go after Snow White while they were away. Then the animals started acting strangely. The dwarfs began to wonder why, then Doc and Grumpy both deduced that the animals wouldn’t act so oddly without a reason.

Happy: Go ahead, get!

Grumpy: They ain't acting this fashion for nothing!

Sleepy was just the first one of them to connect the facts they already knew, that the animals were behaving unusually and that Snow White was in danger from the Queen, and make the correct conclusion. This remains the same across the multiple books Disney has published telling the story as it takes place in the movie. 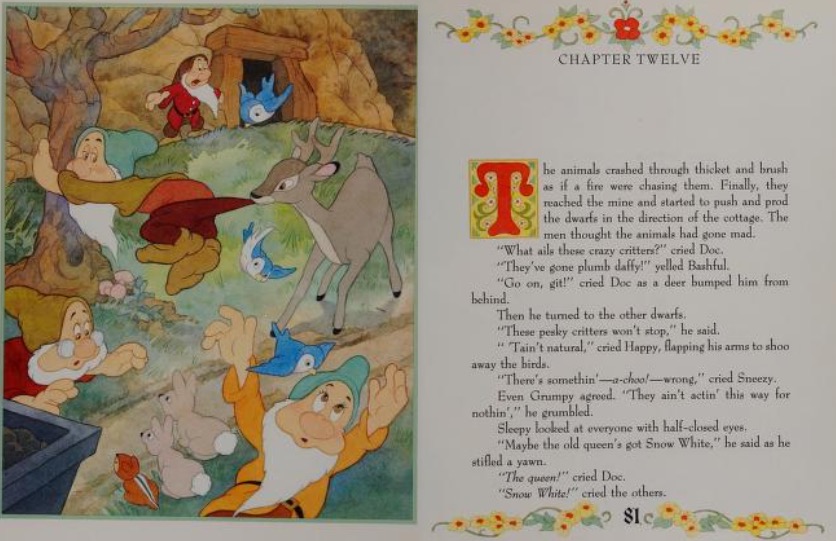 Sleepy connects the animals’ strange behavior with the possibility they are trying to get the dwarfs to go help Snow White.

This is not sourced from the fairy tale, though.

The animals alerting the dwarfs to Snow White being in danger was not based on the source fairy tale. In the Grimms’ version of Snow White, the Queen tries three ways in all to kill Snow White; by lacing her bodice too tightly, by putting a poisoned comb made with witchcraft in her hair, and by giving her the poison apple. The dwarfs are never forewarned that the Queen is with Snow White - all three times, they simply come back in the evening and find her seemingly dead on their return. Additionally, Snow White does not have a connection with the animals in the Grimms’ version - three animals (an owl, a raven, and a dove) come to mourn her, but that is the sole extent of her connection with animals in the Grimms’ tale.

Not the answer you're looking for? Browse other questions tagged disney snow-white or ask your own question.

10
What are weird blue & red orbs on the bridge of the Cygnus in Disney's The Black Hole?
13
What is the nature of the Grinning Gargoyle at the end of Disney's “The Hunchback of Notre Dame”?
36
What does this writing by the genie in Disney's Aladdin say?
13
Where in Snow White does it explain how the Queen knows Snow white?