Title of YA novel by Gordon R. Dickson about teenagers invited to take a trip to another planet by an alien government

Sometime in or before 1968, I read a young adult science fiction novel by Gordon R. Dickson in which a few teenagers from Earth are invited by representatives of a (possibly galactic scale) alien government to take a trip to an alien planet.

On the voyage, they meet an alien named Panjarmeeklotutmurph, who was an Atakit from the planet Jusalemenopratipup. They called him "Peep "for short.

Because of an accident in space, the Earth kids and Peep land on a planet with a rather primitive society.

Can anyone remember the title?

They were humanity's hope - the first young people selected to leave Earth for study in the Galactic Federation.

But something went wrong in deep space. Terribly wrong. Suddenly Jim Rawlins, Ellen Bouvier, Curt Harrington, and the squirrel-like Alien philosopher Peep were castaways, stranded on the Quarantined World of Quebahr - with no training, and little hope of rescue. Between them and the Federation's emergency beacon were primitive Mauregs, aggressive Walats, lizard-like Noifs - plus danger, conspiracy, and the mystery of an impending high-tech war on a backward, peaceful planet.

Without warning, the future of two worlds - Earth and Quebahr - depended on three young humans' ability to adapt and survive.

Here's a brief excerpt from the book where Peep introduces himself to the teenagers:

"Honored! Honored to make the acquaintance of you all!" cried the Alien, beaming. "Let me introduce myself, an erring and faulty student of nonviolence. I am an Atakit, from Juseleminopratipup. My name is Panjarmeeklotutmrp!"

Jim, Ellen, and Curt stared at each other and back at the Alien.

"Oh, call me Peep. Call me Peep!" boomed the Atakit, exuberantly. "All humans do. My unfortunate name is impossible for them to pronounce." 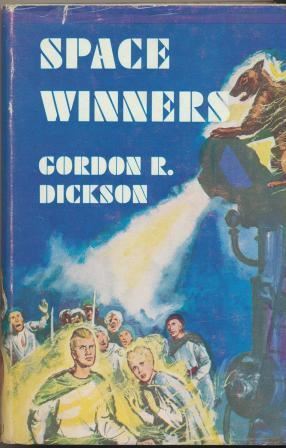 Not the answer you're looking for? Browse other questions tagged story-identification novel aliens young-adult or ask your own question.

20
Why do other races refer to us as humans?

6
VR arcade game teaches teenagers to live on another planet
8
Older novel - Boy can operate alien machines, saves the planet
17
Help Identifying a Sci-Fi Book: Humans transported to alien world and given tasks to escape
8
70s novel about government faking an alien invasion
16
Looking for an old story where humans conceal their newly-discovered psychic abilities from alien visitors
19
Old SF novel about a white-haired young woman, alien or half-alien, who tutors human kids
12
Title/author of novel(s?) about society where children learn alien languages?
3
Young adult novel about a girl with a robot housekeeper on an Alien Planet