Novel about a spaceship in a distortion, a galaxy appears around a corpse [duplicate]

Ask Question
Asked 1 month ago
Active 29 days ago
Viewed 1k times
17
This question already has an answer here:
Looking for Space Exploration Book which is collection of different sub-stories (1 answer)
Closed 28 days ago.

Well, I'm asking for help from other SF fans because I'm trying to recover the title of a novel I read years ago...

Obviously I don't remember the title or the author. I remember that the plot was about a spaceship that, for some reason, finds itself in a distortion due to which it begins to increase in volume (I think it's something like that).

An image that I remember well is that at a certain point, in the central area of said spaceship, where a corpse had been placed, something milky appears and gets bigger. At the beginning the crew thinks it is a ghost but as time goes by they realize that it is a galaxy.

story-identification novel
Share
Improve this question
edited May 12 at 9:10

It is a novel by Bob Shaw, about the voyages of an exploratory ship. I distinctly remember the scene you refer to - when Captain Aesop says something like, "At four thirty-two this morning, an object with the features of a ghost has been observed emerging from Mr. ...'s corpse".

I too read this some thirty years ago, but in Italian.

From the cover that describes the first tale in the book (it has to be the first tale since it deals with Captain Aesop's identity), I'd say it is "Ship of Strangers".

I keep confusing this with A.E.Van Vogt's The voyages of the Space Beagle because two characters have similar names. 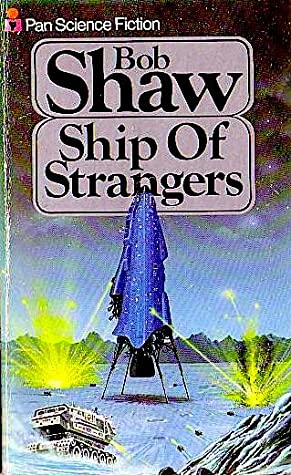 12
Young adult novel about time travel
4
sci-fi novel ending with main character using special dust to fuel his spaceship through a vortex
19
Looking for a book about the moon being a spaceship with an AI
5
Book Identification about a giant spaceship
22
Book about aliens arriving in an old country; people capture their spaceship and arrive at alien's planet
44
Late 1960's Comic Book with H shaped space ship
19
Short story about a spaceship that meets an alien spaceship made of anti-matter