The different names of Mordor

While reading The Lord of the Rings, I got confused with the geography and different names of Mordor. Can anyone tell me the difference between these? (i.e. which names are from which language? Which of these correspond to which places?)

Here are some contextual maps of the things you're looking for. The first image is of Gondor and Mordor. We can see Osgiliath to the East of Minas Tirith, it is within Gondor and was formerly the chief city of Gondor. Continuing East we reach Minas Morgul and Cirith Ungol on the border mountains to the region of Mordor. Coming down from Cirith Ungol into Mordor we enter the Plateau of Gorgoroth, the main region of Mordor, in the middle of which rises the Mountain of Fire, Orodruin, or Mount Doom. East of Orodruin is where Sauron's dark tower Barad-dûr is located. North of Gorgoroth, is the "main entrance" into Mordor, the Morannon. This lies in a plain called Udûn. All these sites can be seen highlighted by either lines, circles or arrows below: 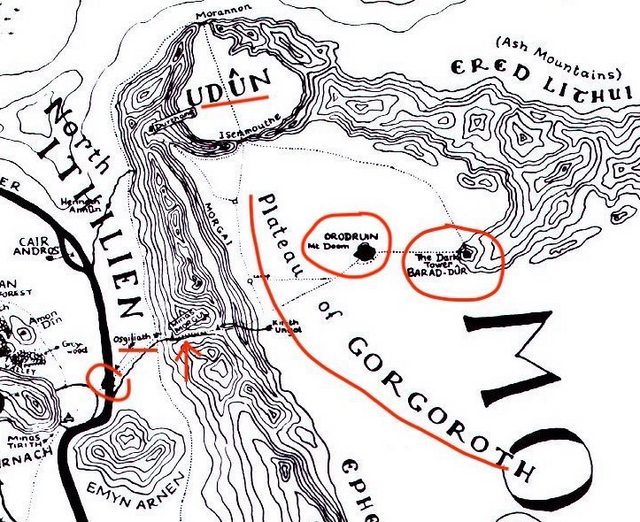 Mordor: "The Black Land", The Land of Shadow

Upon the west of Mordor marched the gloomy range of Ephel Dúath, the Mountains of Shadow, and upon the north the broken peaks and barren ridges of Ered Lithui, grey as ash. But as these ranges approached one another, being indeed but parts of one great wall about the mournful plains of Lithlad and of Gorgoroth, and the bitter inland sea of Núrnen amidmost, they swung out long arms northward; and between these arms there was a deep defile. This was Cirith Gorgor, the Haunted Pass, the entrance to the land of the Enemy. High cliffs lowered upon either side, and thrust forward from its mouth were two sheer hills, black-boned and bare. Upon them stood the Teeth of Mordor, two towers strong and tall. In days long past they were built by the Men of Gondor in their pride and power, after the overthrow of Sauron and his flight, lest he should seek to return to his old realm.
The Two Towers: Book 4, Chapter 3: The Black Gate Is Closed

Barad-dûr: "the Dark Tower", Lugbúrz (to the Orcs)

[Against] Minas Tirith was set another fortress, greater and more strong. Thither, eastward,..: wall upon wall, battlement upon battlement, black, immeasurably strong, mountain of iron, gate of steel, tower of adamant, [Frodo] saw it: Barad-dûr, Fortress of Sauron. All hope left him....
The Fellowship of the Ring, LoTR Book 2, Ch 10, The Breaking of the Fellowship

[In] his ancient kingdom of Mordor beyond the Ephel Dúath, the Mountains of Shadow... above the valley of Gorgoroth was built his fortress vast and strong, Barad-dûr, the Dark Tower....
The Silmarillion, Of the Rings of Power and the Third Age

Osgiliath: Citadel of the Stars, Elostirion (History of Middle-earth only)

The chief city of this southern realm was Osgiliath.... In Minas Ithil was the house of Isildur, and in Minas Anor the house of Anárion, but they shared the realm between them and their thrones were set side by side in the Great Hall of Osgiliath.
The Silmarillion, Of the Rings of Power and the Third Age

Osgiliath, through the midst of which the Great River flowed; and the Númenóreans built there a great bridge, upon which there were towers and houses of stone wonderful to behold, and tall ships came up out of the sea to the quays of the city....
ibid.

As the light grew a little he saw to his surprise that what from a distance had seemed wide and featureless flats were in fact all broken and tumbled. Indeed the whole surface of the plains of Gorgoroth was pocked with great holes, as if, while it was still a waste of soft mud, it had been smitten with a shower of bolts and huge slingstones. The largest of these holes were rimmed with ridges of broken rock, and broad fissures ran out from them in all directions. It was a land in which it would be possible to creep from hiding to hiding, unseen by all but the most watchful eyes: possible at least for one who was strong and had no need for speed. For the hungry and worn, who had far to go before life failed, it had an evil look.'
Return of the King: Book VI, Chapter 3: Mount Doom

At the north end of the Ephel Duath, at its junction with the Ered Lithui, lay a deep circular valley ringed by sheer black barren cliffs - Udûn. Tolkien described the vale as being encircled by arms sent out by the two ranges. The symmetry of the valley suggests either a caldera or a ring-dike. A caldera is the remnant of a volcano that has exploded and/or collapsed. A ring-dike is a circular ridge of cooled igneous rock surrounding a deep valley. It occurs when a round block subsides into an underlying magma chamber and the fluid magma is forced up around the edges. Often the upwelling is intermittent, leaving passes such as the Isenmouthe and Cirith Gorgor. Either process could have resulted in the feature shown by Tolkien, although compared with our world either would have been gigantic. Imagine the original height of a volcano with a forty-five mile base. This colossus would have towered almost 29,000 feet! In contrast, Mt. Doom was only seven miles across and stood 4500 feet."
From The Atlas of Middle-earth, Revised Edition, by Karen Wynn Fonstad, Section 4, Regional Maps: Mordor and Adjacent Lands

(Note there is a difference between the valley of Udûn and the fortress (otherwise known as Utumno). The latter is described as a location for the closest thing to hell in Middle-earth and is hence gives as a translation for the Sindarin word Udûn. It is possible that the valley owes it's name to the fortress of Morgoth and was named so by Sauron, but that is just speculation.)

Minas Morgul: The Dead City, Prior to being taken by the Nazgûl, it was called Minas Ithil, 'Tower of the Moon.'

"Upon the further side, some way within the valley's arms high on a rocky seat upon the black knees of the Ephel Dúath, stood the walls and tower of Minas Morgul. All was dark about it, earth and sky, but it was lit with light. Not the imprisoned moonlight welling through the marble walls of Minas Ithil long ago, Tower of the Moon, fair and radiant in the hollow of the hills. Paler indeed than the moon ailing in some slow eclipse was the light of it now, wavering and blowing like a noisome exhalation of decay, a corpse-light, a light that illuminated nothing. In the walls and tower windows showed, like countless black holes looking inward into emptiness; but the topmost course of the tower revolved slowly, first one way and then another, a huge ghostly head leering into the night."
The Two Towers: Book IV, Chapter 8: The Stairs of Cirith Ungol

"Sam was looking at Orodruin, the Mountain of Fire. Ever and anon the furnaces far below its ashen cone would grow hot and with a great surging and throbbing pour forth rivers of molten rock from chasms in its sides. Some would flow blazing towards Barad-dûr down great channels; some would wind their way into the stony plain, until they cooled and lay like twisted dragon-shapes vomited from the tormented earth. In such an hour of labour Sam beheld Mount Doom, and the light of it, cut off by the high screen of the Ephel Dúath from those who climbed up the path from the West, now glared against the stark rock faces, so that they seemed to be drenched with blood." Return of the King: Book VI, Chapter 1: The Tower of Cirith Ungol

All the names come from Sindarin , the most commonly spoken Elvish language in the Third Age.

A more contextual image showing the region is below. 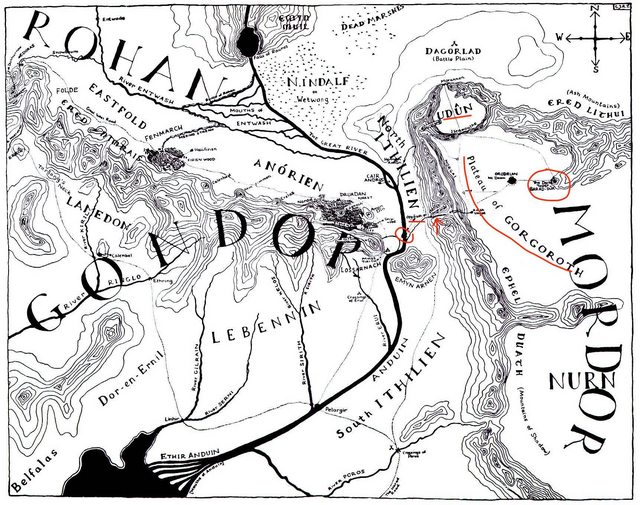 The locations have been covered, so I'll cover the language. They are all words in Sindarin, the language of the Elves of Middle-earth. Well-educated Men would know it as a language of ceremony and academia (similar to Latin).

Osgiliath means "Citadel of the Host of Stars" (lit. "all the stars"). The "Host of Stars" being the Gondorians/Númenóreans, whose banner depicts seven stars above a white tree.

Gorgoroth means something like "Dreaded"/"Horrors". The -oth suffix is unclear.

You'll see many of these fragments repeated in other names of people and places: Morgoth, Gil-galad, Minas Tirith, Amon Hen, Dol Guldur.

Mordor the realm and base of the evil Sauron. It lay to the east of Gondor and the great river Anduin, and to the south of Mirkwood. Wikipedia

Barad-dur It is an enormous fortress of the Dark Lord Sauron, whence he rules the volcanic and barren land of Mordor. Located in northwest Mordor, near Mount Doom. Wikipedia

Osgiliath Osgiliath was the capital city of Gondor. During the War of the Ring, the abandoned city gained strategic importance as a crossing point over the Anduin, both for the Men of Gondor and Orcs of Mordor. lotr.fandom

Gorgoroth Gorgoroth, fully named the Plateau of Gorgoroth, was a region located in the northwestern portion of Mordor. lotr.fandom

Udun Udûn was a wide, depressed valley in northwestern Mordor. It lay between Cirith Gorgor and the Isenmouthe, and was traversed by large armies of Sauron in times of war. lotr.fandom

Minas Morgul Minas Morgul was located in the upland valley known as the Morgul Vale at the feet of the Mountains of Shadow. It overlooked the region of Ithilien and controlled the only passes through the mountains that led into Mordor, the Morgul Pass and the Pass of Cirith Ungol. lotr.fandom

35
Was the original hobbit name of Bilbo and Frodo "Bilba" and "Froda"?
84
Which are the Two Towers in The Lord of the Rings?
50
Why was Boromir allowed to join the Fellowship of the Ring?
23
How much did Tolkien write about the connection between WWI and his work?
58
Was the Stone of Minas Tirith still dangerous after Sauron was destroyed?
21
Is there a list of the names used for Sauron in Lord of the Rings?
6
From whence comes Tolkien's history of the Mûmak (Oliphaunt) and its demise?
9
What is the point of the Rammas Echor?
5
What is the significance of towers in Lord of the Rings?