I've been trying to find a series of books I read in middle school (~2001, though I have no idea when they were published but I vaguely remember thinking they were "old" books at the time, which could have meant anything from the 80s through 1999).

I remember reading at least 3 books by the same author that all had different characters and plots, but all involved people from our world finding their way into faery (it might have been called something different), and all ended on a cliff hanger (but with no sequel, they just ended). I believe that (like all proper fairy stories) faery was dangerous for mortals to enter and the characters were normally trying to find their way out or stay safe somehow.

In one of the books I have a memory of the characters being holed up in a cabin trying to avoid being harmed by something in the perilous realm (though I have no idea what it was they were worried about). A messenger from a nearby city (possibly on horseback?) had offered them sanctuary there from whatever it is that would have hurt them and they were debating taking him up on his offer, but for some reason they though that the price of admission to the city was to give up all free will (I remember thinking it was like the city in "A Wrinkle in Time" in this respect). In the end…

they decide to accept his offer and they enter the city. This is the end and you don't know if it was a trap or not.

One of the dangers in faery that I think was mentioned in multiple books are cigar shaped UFOs in the sky, though I don't remember what they were or why they were dangerous. I also have vague images of the characters on the shore of a windswept lake and the queen of faery or something along those lines living on the opposite shore, but I know it's not much to go on.

I remember thinking the author had a very distinctive name, and for some reason I want to say that it started with "L", but I may just be mixing it up with various Le Guin books that I read a few years later.

In a backwoods area, there are a couple of vacation homes. The locals know better than to use one particular road, since over about a 150 years period people who use that road have a tendency to disappear.

The young male protagonist is going to spend the summer at one of the homes, and a young woman stranger talks him into guiding her to the other home, and using the sinister road. You guessed it, they fall through a hole in space/time and wind up in a sort of Land of Faerie.

It is a dangerous place. The forest is infested with savage enchanted beasts. And overhead there is an aerial battle between two different types of UFO aliens, raygun battles and alien abductions included. One uses flying saucers, the other use cigar shaped space ships.

The protagonists manage to find some other trapped humans. This group became trapped in Faerie by stumbling through another hole in England, during World War II. They think they've only been in Faerie for a couple of years, not decades. Everybody hides out in an abandoned cabin.

Among the Faerie, one is named Herald, who rides on horseback. The UFO aliens often shoot at him with ray guns, but the rays just bounce off his magic. Anyway, he offers each human (and their pets) a choice. They can eat a magic apple and become one of the Faerie. They will then be safe from the UFOs and enchanted beasts. Unfortunately they will no longer be human.

The humans mostly think this is too high a price to pay, but the protagonist isn't quite so sure. 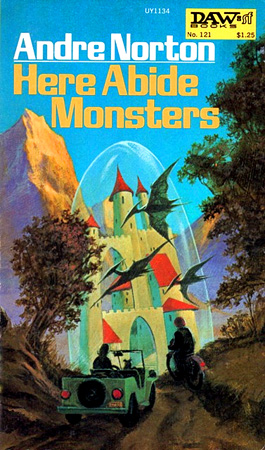 18
Looking for a book series about a girl and her friends captured and sold as slaves
7
Looking for name/author of a book series with a lottery
8
Need help with finding a book series involving other dimensions
7
Help identifying a story about a town covered in darkness, a well, and a naked lizard-man-thing
12
Need help ID'ing a specific book (or books?) similar to A Wrinkle in Time
5
Fantasy author includes books about a bloodline involving flames and wolves