Have the Tau ever allied with Space Marines or Eldar?

In the 6th edition rule book for Warhammer 40K, it states that Tau consider (and vice versa) Space Marines and Eldar to be battle brothers. The only encounter I know the Tau have had with Space Marines is during the Damocles Assault (?) where the Tau helped Space Marines hold off against the Tyranid Hive Fleet. The Space Marines let them leave the planet before calling down an Exterminatus on the planet. This seems more like they were 'Allies of Convenience'.

Is there some Black Library fiction supporting this? Some back story I'm missing?

The Tau also briefly allied with the Ultramarines on Dolumar IV during the events of Fire Warrior (both the game and novel) against Chaos.

THE GREATER GOOD - from the Blacklibrary.com 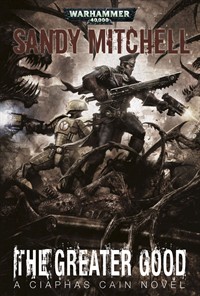 THE STORY When the world of Quadravidia comes under attack by the insidious Tau, only one man can defeat the aliens and save the planet in the Emperor’s name: the legendary Hero of the Imperium, Commissar Ciaphas Cain. When the aliens call for a ceasefire, Cain expects the worst, and his fears are answered in the form of the dread menace of the Tyranids. As a hive fleet approaches Quadravidia, Cain must try to forge an alliance between the Imperium and the Tau – but can he truly trust the inscrutable xenos?

ABOUT THE BOOK The ninth book in the popular Commissar Cain series.

Allies is probably the wrong word. They have fought a common foe before and they have provided intel to the marines and eldar. All three factions seek to destroy the Tyranids. They have worked together to defeat the tyranids, though I know of no formal alliance that has ever been entered. Its more of a the enemy of my enemy is my friend relationship. It has been stated that the marines do not understand the machinations of either race.

It's actually the other way around. Tau have never joined the imperium, but some excommunicated groups of space marines, have joined the tau for the greater good, along with guardsmen. So, the best way to make space marines with tau, is to create a custom space marine chapter, who is painted in the colours of the tau.

Or else, just treat them as battlebrothers in mechanics, but allies of convenience, in the "fluff" of your battle, such as in the case where they fought together to repel Tyranids :)

I know Ciaphas Cain forged a temporary alliance between Tau and the Imperial Guard on Gravalax in "For the Emperor" against a Genestealer Cult and their Traitor Army.

I believe there was one battle when the Ultramarines and Tau combined forces to fight the Necrons on a Tomb World. The "alliance" won and the Tau were allowed to retreat. Then an exterminatus was used to purge the planet of Necrons.

A large Ultramarine force accompanied by a massive Imperial Navy once suddenly appeared in orbit about a Tau planet, and the Tau readied their navy to defend themselves. The Tau were vastly out-gunned. However to the horror/relief of the Tau the IoM forces weren't there for them. An even larger Hive Fleet revealed itself and the IoM forces went to work.

So in this case the Ultramarines were in the vicinity of Tau and not killing them, but instead killing a foe the Tau also consider an enemy.

34
Why are there no female Space Marines?
3
Space Marines vs Imperial Guard
6
Which of the Warhammer 40k races have allied with one another most often?
12
When did Space Marines become more 'religious'
8
Are Space Marines capable of fighting underwater?
11
Are space marines sterile?
11
Has there ever been a case of space marines refusing to fight enemies with weapons that can vaporise them?
9
Do Space Marines ever have contact with their families
1
Has Gabriel Angelos worked with the Eldar?