In this isekai a god pulls a girl to take over the role of a villainess in this new world where she has to "act" the role and fulfill her purpose in order to save her sister's life in her own world. She accomplishes this but instead of being banished like she hoped she is turned into a maid.

Why does being a villainess in that world save her sister? -She essentially makes a deal with the god of the fantasy world, her sister in modern Japan (i presume) is sick and dying, the deal entails for her to fulfill the role of villainess in the fantasy world as to "not disturb major events in the timeline of this world or something like that" is kinda vague, mind you all of this happens within the first few chapters of the manga, also she gets her engagement annulled because she was bullying the heroine, however since she never did anything violent or harmful, she is stripped of her noble title and made a maid for the palace, (she wanted to be banished).

Another detail that i remember is that when she was demoted to maid there was a head maid that whipped her arms as a form of punishment and a knight (captain?) gave her some medicine. that is all i can remember for now.

story-identification manga isekai
Share
Improve this question
edited May 19, 2021 at 9:37

The Role of the Villainess Is No More! 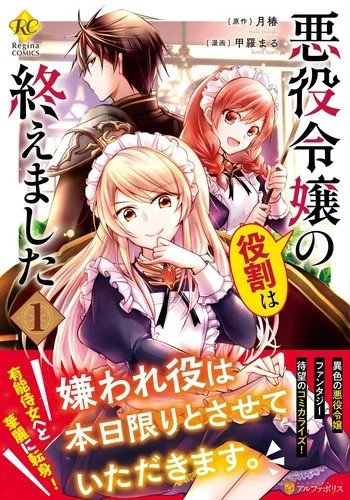 Yukino Amaishi signed a contract with God to save her sister. She was then reborn in a different world as Lefina Eilferia, the daughter of a duke and the Crown Prince's fiancée. After successfully completing the objective of giving the heroine and the prince a happy end, Lefina, who played the role of the villainess, ends up working in the castle as a maid.

Found with a search for isekai manga villainess "save * sister" maid

3
Isekai Manga about Protagonist with no Magic?
3
Isekai Manga idenification
2
Manga with isekai working mc
4
Looking For A Specific Isekai Manga
3
manhua/manhwa: isekai, FL with redish/pinkish hair adopted by noble family
5
Manga where a reincarnated(?) young boy has a maid and a wolf girl who he does business with
6
Isekai manga where male protagonist gives sweets from his original world as offerings to goddesses
4
Manga about a noble girl who's banished by her parents and school, then later dies, goes back in time, and experiences similar events again
3
Isekai MC has to act according to his characters personality