What is the origin of the Witch Hunter archetype or genre?

The character with late european medieval/early renaissance religion, tall black hats, cloaks and weapons like the crossbow, sword or pistol, and of course a fanatical devotion to hunting down witches and supernatural creatures... what are the earliest fictional representations of these or the seminal works that gave rise to movie characters like Van Helsing, the Warhammer Fantasy archetype, and the Hammer film Witchfinder General?

It seems like they sprang into life in the 20th century, almost out of nowhere. Can anyone recommend some early books, stories or other media to get stuck in with this genre/character?

I believe the visual archetype originates with the common dress (or, at least, the common perception of dress) of the Puritans in the north-east USA in the late 17th century, the time when the infamous Salem Witch Trials were held, as can be seen in the piece "Witch Hill (The Salem Martyr)" by Thomas Satterwhite Noble: 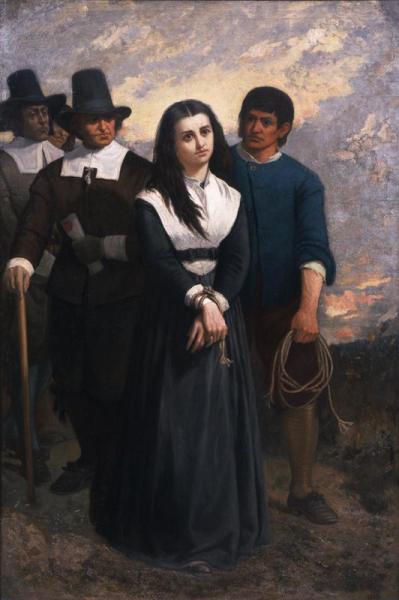 Black clothes, a tall (often buckled) black hat, cloaks and pistols were all in common use by the puritans, and their public perception were of grim, humorless religious fanatics insistent on removing heresy and impropriety from the community, as exemplified by "witches" (whether they be actual witches or adulterous women, as in The Scarlet Letter).

There is a slight historical basis for fictional witch and monster hunters.

There were real professional hunters of heretics in the middle ages and early modern era.

Roman Catholic ones often belonged to one of the several inquisitions, such as the Medieval Inquisition (consisting of the Episcopal ((Bishop's)) Inquisition c. 1184-1230s and the Papal Inquisition founded in the 1230s), the Spanish Inqisition (1478-1834), the Portuguese Inquisition (1536-1821), and the Roman Inquisition, established in 1542 and still existing at the present, though it lost its authority to inflict secular punishments like imprisonment or death centuries ago.

In the Middle Ages, many European people believed in folk tales and superstitions about witches who could use magic to do you favors or harm you. So there were many accusations that people were witches using magic to harm. And the Catholic church usually took the position that witches and witchcraft were imaginary and that belief in witchcraft was heresy. So Medieval Inquisitors usually didn't hunt witches very often.

But during the 15th century, the Catholic Church reversed its position on witchcraft 180 degrees. The turning point might have been in the 1480s.

In 1484, Dominican Inquisitor Heinrich Kramer attempted to start witchcraft trials in the Tyrol. But he was accused of illegal methods and expelled from Innsbruck. Kramer obtained from Pope Innocent VIII on 5 december 1584 a papal bull Summis Desiderantes Affectibus giving Kramer authority to persecute heretics and witches in the dioceses of Mainz, Trier, Cologne, Salsburg, and Bremen. And Kramer began writing a book on how to prosecute witches.

The Malleus Maleficarum, usually translated as the Hammer of Witches, is the best known treatise on witchcraft. It was written by the Catholic clergyman Heinrich Kramer (under his Latinized name Henricus Institoris) and first published in the German city of Speyer in 1486. It endorses extermination of witches and for this purpose develops a detailed legal and theological theory. It has been described as the compendium of literature in demonology of the 15th century. The top theologians of the Inquisition at the Faculty of Cologne condemned the book as recommending unethical and illegal procedures, as well as being inconsistent with Catholic doctrines of demonology.

The Malleus elevates sorcery to the criminal status of heresy and recommends that secular courts prosecute it as such. The Malleus suggests torture to effectively obtain confessions and the death penalty as the only certain remedy against the evils of witchcraft. At the time of its publication, heretics were frequently punished to be burned alive at the stake[21] and the Malleus encouraged the same treatment of witches. The book had a strong influence on culture for several centuries.

Jacob Sprenger's name was added as an author beginning in 1519, 33 years after the book's first publication and 24 years after Sprenger's death; but the veracity of this late addition has been questioned by many historians for various reasons.

The Malleus Malificarum claimed that there was a secret cult of devil worshipping witches who used their magic powers to inflict harm on their Chrisitan neighbors. It claimed that the witch cult was a "clear and present danger" to the survival of Christendom and so should be destroyed using the harshest possible measures.

So when people accused other people of being witches in the folklore sense, inquisitors and secular lawmen often interpreted that as accusing them of being witches belonging to the imaginary witch cult of the Malleus Malificarum and used the harshest possible methods to try, convict, and execute those alleged witches.

For one, two, or three centuries in different countries of Europe people were tried for witchcraft, and according to various estimates a total of tens or hundreds of thousands of people were executed.

The general rule in witchcraft trials was that the accused was considered guilty until proven guilty, and it was usually impossible for an accused witch to be acquitted. Katerine Kepler (1546-1622), mother of Johannes Kepler, was one of the very few persons acquitted after being formally charged with witchcraft.

So after about 1500 any Catholic inquisitor whose job was hunting heretics would also have the job of hunting witches. And any lawman in a Catholic country could be called upon to hunt witches at any time.

But the Reformation began just a few decades after Malleus Malificarum was published, and large parts of Europe became no longer Catholic.

Matthew Hopkins (c. 1620 – 12 August 1647) was an English witch-hunter whose career flourished during the English Civil War. He claimed to hold the office of Witchfinder General, although that title was never bestowed by Parliament. His activities mainly took place in East Anglia.2

Hopkins' witch-finding career began in March 1644 and lasted until his retirement in 1647. He and his associates were responsible for more people being hanged for witchcraft than in the previous 100 years, and were solely responsible for the increase in witch trials during those years. He is believed to have been responsible for the executions of over 100 alleged witches between the years 1644 and 1646.

It has been estimated that all of the English witch trials between the early 15th and late 18th centuries resulted in fewer than 500 executions for witchcraft.[citation needed] Therefore, presuming the number executed as a result of investigations by Hopkins and his colleague John Stearne is at the lower end of the estimates, their efforts accounted for about 20% of the total. In the 14 months of their crusade Hopkins and Stearne sent to the gallows more accused people than all the other witch-hunters in England of the previous 160 years.

So there have been historic witch hunters, although in modern times they are usually depicted as villains instead of heroes.

And as far as I know that is the only factual basis for the fictional depiction of heroic witch and monster hunters.

John Buchan's historical novel Witch Wood (published 1927, set in 1644) is an early-ish example of an independent (not clerical) witch hunter in fiction, but this is not at all a heroic one. Anyone thinking of reading it, be warned, that particular section is extremely grisly.

[David's sermon] had a new hearer. A man sat beneath the pulpit whose eyes never moved from the minister's face--a mere lath of a man, thin to emaciation, with a narrow head and a much-freckled face, a ragged beard, and eyes with red lights in them like a ferret's. David noticed that, as the kirk emptied, the others seemed to shun the newcomer's proximity. As he moved to the door, there was a drift away from him, like sheep from a collie.

The stranger is revealed to be a travelling "pricker" (witch-finder) called John Kincaid.

As he rode to Kirk Aller next day David reflected much on Isobel's tale. Who could have brought a pricker to Woodilee--and lodged him with Chasehope? Was it the work of the Presbytery? Was it a plan to cover up the major sin by hunting out minor sinners? He knew of the pricker class as of the worst repute, knaves and quacks who stirred up popular superstition and were responsible often for hideous brutalities. Even the Law looked askance at them. He did not like to be absent from his parish when such a creature was let loose in it.

The "major sin" is Ephraim Chasehope himself, a respected Elder of the local church who David has reason to suspect is secretly the leader of a coven of devil-worshipping witches. The pricker fulfils David's worst fears. David returns home to find that Chasehope, avoiding all suspicion himself, has accused one of his own deluded followers as a witch, a simple-minded old woman called Bessie Todd. With the help of some of the villagers, Kincaid beats a nonsensical confession out of her, and she later dies of her injuries.

Notably, Kincaid's legal standing is described as none too sound.

"If there's blame to be cast it's on this pricker chiel that comes from I know not where."

There was something in the quiet tones which fell like oil on yeasty water. David settled back his sword into its sheath, Mirehope sat down again on his keg, Chasehope turned his head to the speaker with the first sign of discomposure he had yet shown.

"Ye'll forgive me, neighbours," Mark continued, "since I'm but new come to the parish, but I've seen a hantle o' the world, and I would be wae to see honest men run their heids against a stone wall. The woman may be a' you say and waur, but it looks as if her handlin' had been ower sair, and I'm muckle mista'en if she'll no be a corp ere morning. Consider, friends.--This is no a court constituted by a Privy Council commission; it's nae mair than a private gathering o' well-wishers to the Kirk and the Law. In my time I've meddled ower much wi' the Law for my comfort, and I ken something about the jaud. The Law has no cognizance of a pricker or onything like him, and if well-meaning folk under his guiding compass the death of a man or woman that has not been duly tried and sentenced, the Law will uphaud it to be murder, just as muckle as if a caird had cut a throat at a dyke-side. I greatly fear ye've brought yourselves into its danger by this day's work."

My guess would be that this archetype is based on Solomon Kane, a character created by Robert Howard, first published in 1928.

19
What's the origin of Flying Brooms?