I would like to get the timeline of the following events - which has never been entirely clear to me - straightened out once and for all:

I am looking for both the Canon and Legends versions (if they differ at all). If there are any holes, unknowns, or inconsistencies, please feel free to reply with whatever is available, including multiple contradictory versions.

I've made a flowchart ordering the events whose relative order we know. Explanation of the ordering follows. 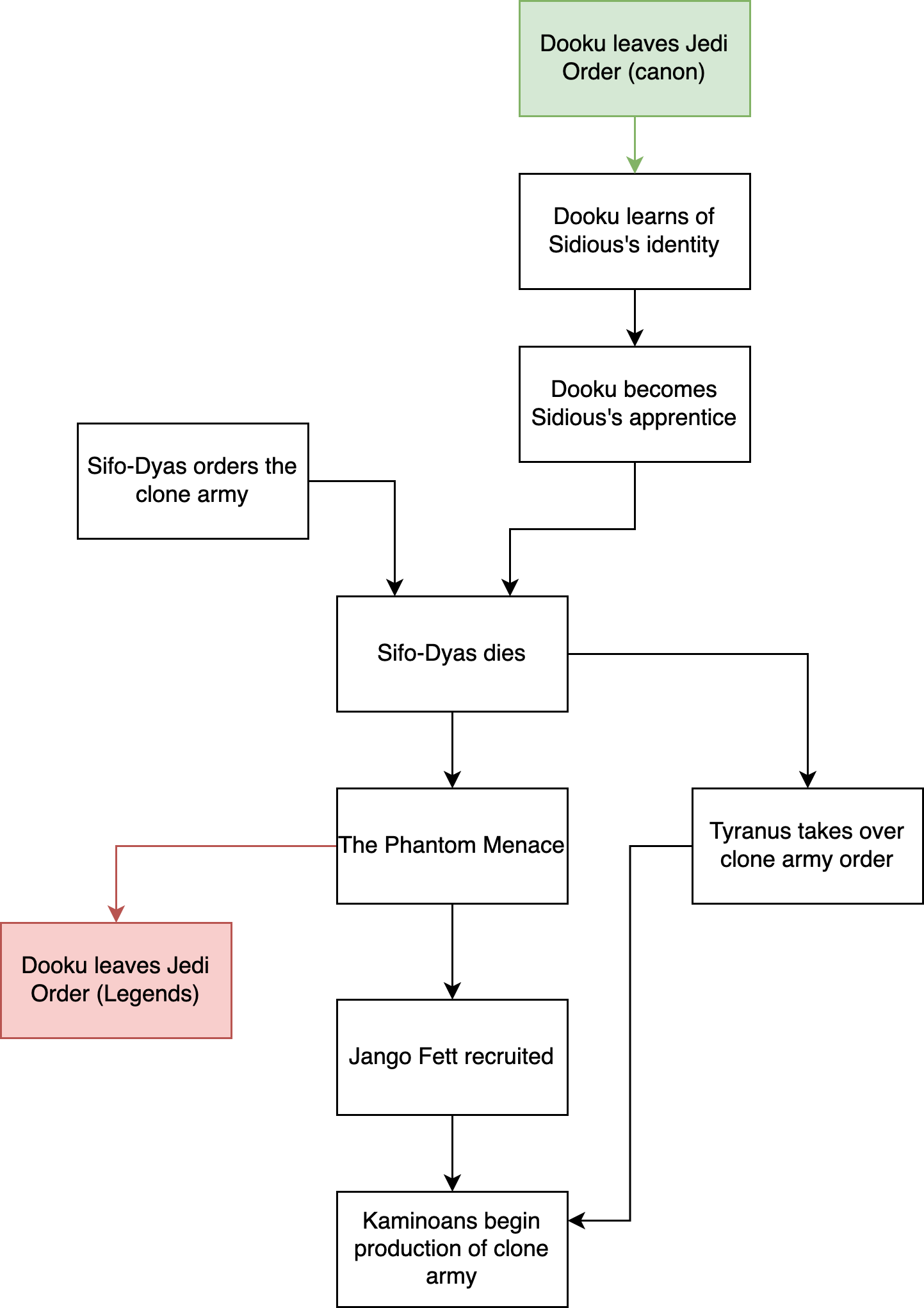 The canon version of events is almost straightforward, except that:

I'm assuming the USW version of events is a mistake, although it's possible that there's some explanation, like Sifo-Dyas taking so long to reach his destination that he didn't get there until after TPM. With that in mind:

Much of the order is the same, except in Legends, Dooku left the Jedi Order after TPM, which creates some inconsistencies.

This apparently happened first, since Dooku was apparently training under Sidious at the time Sifo-Dyas made the clone order. This creates an inconsistency given that Darth Plagueis says that Sidious hadn't revealed himself by the end of The Phantom Menace, although Sidious and Dooku had had a working relationship by then.

Dooku was apparently training under Sidious at this point, since according to Jedi vs. Sith: The Essential Guide to the Force, killing Sifo-Dyas was required for his promotion to Sith Lord.

Note that this is a fairly large inconsistency, since Darth Plagueis and other sources strongly imply that he hadn't turned until later. The Essential Guide to the Force in particular seems to have assumed that the Tyranus/Sifo-Dyas events took place post-TPM, not least because of the Rule of Two, but this assumption was apparently later retconned.

Darth Plagueis and Darth Sidious arranged for Sifo-Dyas to fund the creation of the clone army, using funds provided by Plagueis's company Damask Holdings. This is described in Darth Plagueis and appears to uncontroversially take place before TPM.

This apparently happened before The Phantom Menace, since Chancellor Valorum's aide, Silman, was present at the time, according to the TCW episode The Lost One, and Chancellor Valorum has been replaced by the end of TPM. Sifo-Dyas was murdered by Count Dooku in all versions of his story. This happened relatively soon after ordering the clone army.

Note that TCW is the first mention of Sifo-Dyas being killed by Dooku pre-TPM; without this detail, there would be very little inconsistency.

Valorum replaced by Palpatine as Chancellor. Palpatine kills Plagueis during the events of the film, according to Darth Plagueis. Qui-Gon is killed and Darth Maul is believed dead.

Setting up the army (order unclear)

a. Dooku leaves the Jedi Order

Officially, his leaving was due in part to his dissatisfaction with the Jedi's actions at the Battle of Galidraan, which definitely took place before TPM (variously in 44 BBY and 34 BBY in Legends), but ultimately he only left after Qui-Gon died in TPM.

However, since he'd apparently fallen to the dark side at this point, this can be assumed to be a cover story. In any case, he could only have erased Kamino from the archives while still a Jedi (according to Attack of the Clones), so his leaving would have had to have happened after he was at least aware of the cloning plot.

b. 'Tyrannus' 'takes over' from Sifo-Dyas as the Kaminoans' client

Probably happened before hiring Jango Fett, but it's unclear.

c. Jango Fett is recruited on the moons of Bogden

The Kaminoans begin production on the clone troopers

Presumably this happened last, since the genetic template would need to have been selected, and Dooku would need to be able to set things up with the Kaminoans.

Not the answer you're looking for? Browse other questions tagged star-wars star-wars-legends the-phantom-menace timeline or ask your own question.

21
Did Sidious have both Maul and Dooku as apprentices at one time?

24
Dooku and Sifo-Dyas
1
Was the Force used before 100,000 BBY?
13
Does BBY/ABY standard exist in-universe?
21
Did Sidious have both Maul and Dooku as apprentices at one time?
3
Did the events of "One More Day" erase Mary Jane's pregnancy from the timeline?