Science fiction novel (first of a series?) about brain implants and social change

I suspect that I'm just not using quite the right keywords, but somewhere in the 2010s (probably the early part), I read a science fiction novel about brain implants. They were a relatively new innovation, starting off as a therapeutic thing with them being used to control seizures and deal with other brain issues, but it's been discovered that it's fairly elementary to use them to increase processing speed, access databases, etc, and it's resulting in a social backlash where people with implants are being considered ineligible to compete with the non-augmented in contests, jobs, etc, and eventually legislation is passed that makes them considered less than fully human, and they start being relegated to what are essentially reservations (trailer parks that they can't leave) with bands of "upright citizens" in pickup trucks terrorizing them. The main character is a boy (mid-teenage, I think) whose father was one of the scientists who worked on the implants. He has an implant, but solely to control his seizures, with no additional ability, and finds himself lumped in with the rest of the world with implants.

Except, of course, it turns out that this is not the case, that he actually has a special sort of implant, courtesy of his father, that was intended as a secret government program to create super-soldiers. Once this gets unlocked, he finds himself unwillingly pulled into the role of leading a revolution as the implanted rise up to fight back, alongside others with special implants. Other than this, I have several scattered memories from the book:

I remember the cover being black with a symbol in white on the front, which may have looked like the Power Symbol, and the title being one word.

In the course of writing up the question, I did a few more searches, and came up with Amped by Daniel H. Wilson. 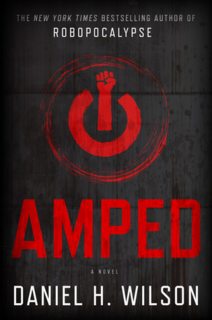 In a near-future where the Neural-Autofocus and other neural implants made formerly mentally challenged individuals into equals or superiors to those with normal brain functionality, Owen is a high school teacher whose surgeon father helped develop the implants to control his epilepsy. When the United States Supreme Court rules that implanted individuals are no longer a protected class, Owen's life is changed forever, as he discovers that his implant has a very dangerous secret.

It seems I was wrong about the age of the protagonist and the color of the power symbol.

31
Sci-fi novel about biological computers put into people's heads, making assassins
11
Story about brain implants that were similar to Google Glasses
9
What story involved a man awakened from a long suspended animation with a new body, and a brain implant with eye interface?
10
Novel from the 80s: Brain harvested and forced to fight in a war
10
Sci-fi book series: escape from Earth , brain implants, engineer with stored fixes in his head
4
TV Series (I think) about wireless internet implants gone deadly
8
In search of a YA book about wrist implants and a city beneath New York