Trying to identify an old sci-fi novel: a group of space travellers visiting a planet previously long-inhabited but regressed?

I know this is a very long shot, but for years I've been trying to ID a sci-fi novel, quite likely the first I ever read.

I know, super, super vague. I wish I could provide more, sorry. Thanks.

story-identification novel novella
Share
Improve this question
edited May 31, 2021 at 3:07

This could be Star Rangers (also known as The Last Planet) by Andre Norton, originally from 1953. It's a short book. It's been decades since I read it; I'm going by the Wikipedia synopsis here.

A scoutship of the Stellar Patrol crashes on a mostly-uninhabited planet. The crew includes reptile- and bird-like people. The survivors meet up with the survivors of another wrecked spaceship, who have inhabited an abandoned city. There's definitely conflict, a rebellion and some psychic combat. There's mention in the synopsis of natives, so I guess some of the original inhabitants were still around.

Could this be the cover you remember? 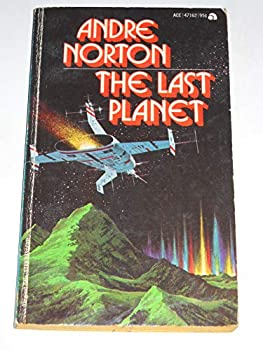 This is the cover of the version I have from the early 80s: 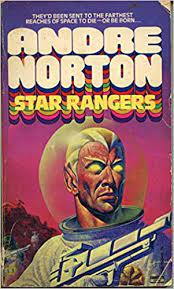 And this may be the cover @R.Hamper remembers: 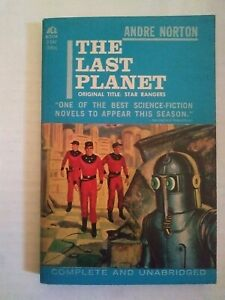 I wonder if you're remembering Andre Norton's Star Rangers (also released as The Last Planet). It was originally published in 1953, but had several reprintings in the 1960s and 1970s.

The mixed-species, but predominantly human crew of a Stellar Patrol ship are stranded on an uncharted planet when their old, insufficiently supplied spaceship crashes. They find a road buried in the sand that leads to a city where survivors of another crash are under the control of a projective telepath. Again, these are mostly human, but there are also some reptilian-type Zacathians.

The telepath is defeated, freeing those in thrall to him, so he takes off and tries to enslave a group of natives. The natives are very human-like, but slightly different; I don't think they were described as devolved or apelike though.

They didn't discover another spaceship, but they did find the original hall of leave-taking, and they were able to guide in another ship load of refugees from the collapse of the empire.

7
Story about a planet in a binary system
10
Story with multiple 'third planet' races
8
Trying to identify an old novel about an artist with only one year left to visit new worlds
35
Story Identification: Fantasy world that is "the one true world"
11
Story of a man who is sole survivor of a crash landing on a planet with cities from extinct alien race
8
Looking for the title of book about a deep space commercial way station
9
Book about an astronaut who is tasked with investigating the disappearance of a shuttle in the vicinity of a small forest planet
9
Novel about "living pods" and their relationship to humans
6
Story identification: Protagonist with headaches on planet where he can heal everyone