Why does Luke draw his blaster instead of his lightsaber to deal with an apparent threat?

For almost 4 years after his training in the ways of the Force with Master Obi-Wan Kenobi, Luke Skywalker had kept with him the lightsaber that once belonged to his father; then, Luke first meets Yoda in the swamps of Dagobah. While Luke was setting up a temporary camp, the sudden, unexpected appearance of a small creature caused him to draw his blaster.

I ask: why was Luke, after having directly experienced/felt the power of the Force, more likely to reach for his blaster than his lightsaber to deal with an apparent threat?

I just found this wallpaper with a more clear picture of the scene dealt with in my question. 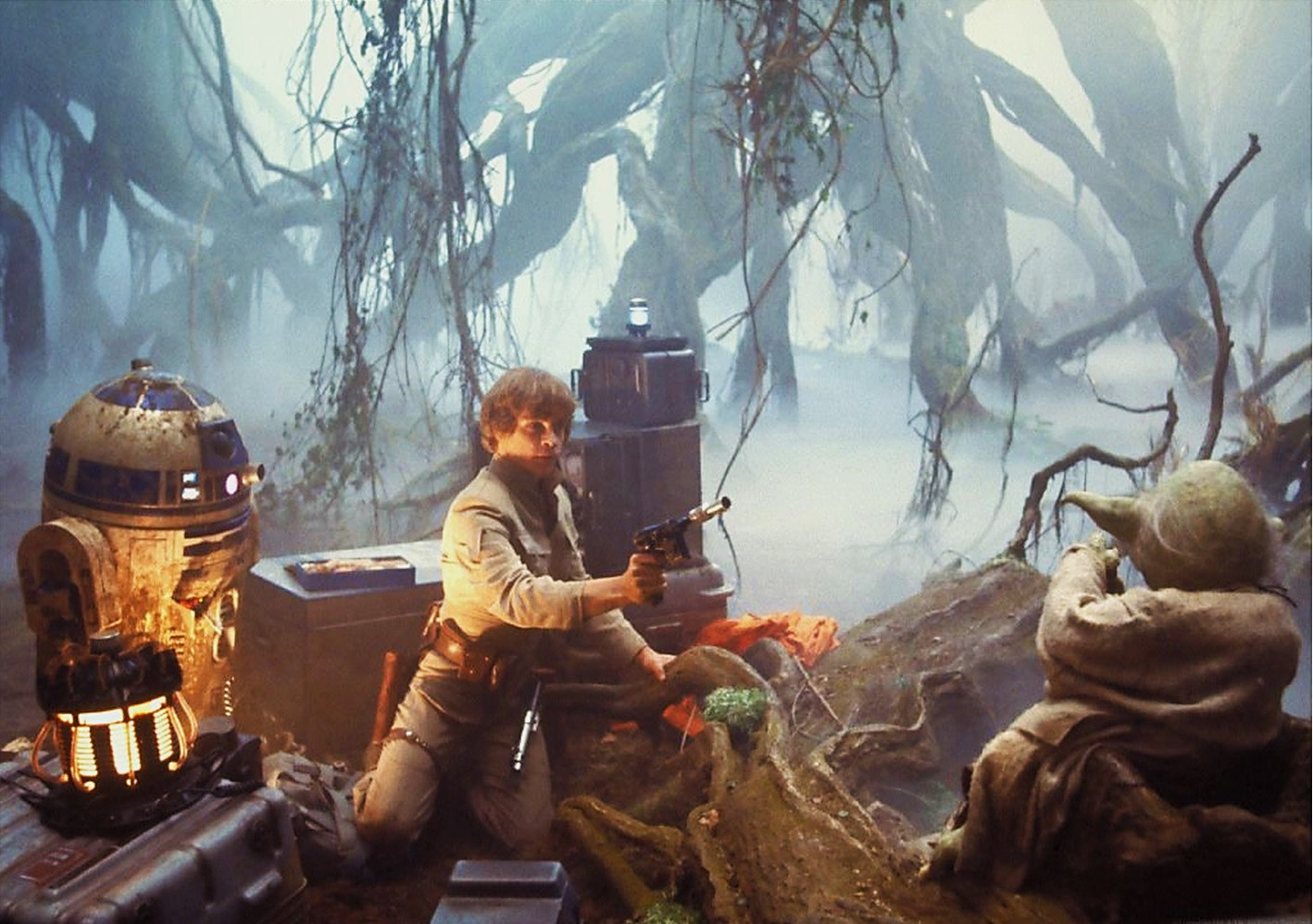 As originally scripted, Luke did pull out his lightsaber.

Nervously, he looks around at the foreboding jungle.

Luke: Still... there's something familiar about this place. I feel like... I don't know...

Luke jumps out of his skin. Artoo screeches in terror. The young warrior grabs for his lightsaber as he spins around, looking for the speaker. Mysteriously standing right in front of Luke is a strange, bluish creature, not more than two feet tall. The wizened little thing is dressed in rags. It motions toward Luke's sword.

Luke: (looking at the creature) Like we're being watched!

Creature: Away with your weapon! I mean you no harm.

So, my guess is this got changed as they were filming it for out-of-universe reasons rather than in-universe ones. One reason might be framing around the Yoda puppet: in order to get Luke, R2, and Yoda in that image you posted, Luke has to be squatting. If he pulled out a sword from that position, it'd look ridiculous.

Another possible answer is they were concerned that the blue lightsaber effect would disappear into the blue background of Dagobah. This is famously why Luke's lightsaber color was changed to green in Return of the Jedi, so it could be visible in the outdoor shots aboard Jabba's skiff.

During Empire, Luke simply seems to be more comfortable with a blaster than with his lightsaber. He also draws it earlier on Dagobah when R2 has been pulled underwater and later when sneaking around Cloud City.

He was already able to use a blaster by the time of A New Hope (see this comprehensive answer on another question) and he's received no formal lightsaber training since Obi-Wan's death.

With that in mind, it makes sense that he would instinctively reach for his preferred weapon when already tense and surprised by Yoda, regardless of any tactical considerations.

Possibly debatable, since he has no idea what the residents of Dagobah might be familiar with, but with the Jedi being largely unknown, a combatant doesn't immediately know the threat of a lightsaber, particularly if it's not ignited, but they know the threat of a gun, so they're more likely to back off.

The obvious answer is because a lightsaber though very powerful, does not have nearly as much range as a blaster and if the intruder was far away the lightsaber wouldn't really be able to take it out if far enough.

49
Why didn't Luke use his lightsaber during his mission on the first Death Star?
18
Short story about a man stranded on a strange planet testing a new ray gun who falls back to bow and arrow

10
Why couldn't Yoda save (or help Luke save) Han and Leia in ESB?
7
What would have happened if Luke hadn't brought his weapon into the cave with him?
4
Why does Luke Skywalker not sense the Force in Master Yoda?
17
Expecting visitor Luke Skywalker on Dagobah, Yoda was?
12
Why did Obi-Wan wait years after his death to tell Luke to go to Dagobah to find Yoda?
7
Does standing or hanging upside down improve one's connection to the Force?
49
Why didn't Luke use his lightsaber during his mission on the first Death Star?
10
How did Luke get his lightsaber back from Raynar Thul?