Why do the Harry Potter villains host events at graveyards?

Why though? In The Goblet of Fire Voldemort sends Harry and Cedric (though he didn't know Cedric would be there) to the Little Hangelton graveyard to die, and in Fantastic Beasts: The Crimes of Grindelwald, Grindelwald hosts a rally at the Lestrange Mausoleum in the Père-Lachaise cemetery. 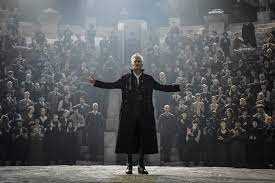 Why does this rally point exist in the middle of a cemetery?

Okay, we know that Voldemort choose the graveyard because it was close to his mom and dad's house, but why revive in a cemetery? Why not, on a field nearby or someplace?

Voldemort needed a bone from his father’s grave to return to a body, and summoned the Death Eaters once he had a proper body.

Voldemort was restored to a body in the Little Hangleton graveyard because he needed his father’s bone for the potion that would create him a proper body. By making the potion in the graveyard, Wormtail was able to take the bone from the grave and put it directly in the cauldron.

“Wormtail was speaking. His voice shook, he seemed frightened beyond his wits. He raised his wand, closed his eyes, and spoke to the night. ‘Bone of the father, unknowingly given, you will renew your son!’

The surface of the grave at Harry’s feet cracked. Horrified, Harry watched as a fine trickle of dust rose into the air at Wormtail’s command, and fell softly into the cauldron.”
- Harry Potter and the Goblet of Fire, Chapter 32 (Blood and Bone)

Voldemort summoned the Death Eaters to him as soon as he was restored to a body, using Wormtail’s Dark Mark to call them to his location - which happened to be the graveyard since it was the site of his resurrection.

“Voldemort bent down, and pulled out Wormtail’s left arm; he forced the sleeve of Wormtail’s robes up past his elbow, and Harry saw something upon the skin there, something like a vivid red tattoo – a skull, with a snake protruding from its mouth – the same image that had appeared in the sky at the Quidditch World Cup: the Dark Mark. Voldemort examined it carefully, ignoring Wormtail’s uncontrollable weeping.

‘It is back,’ he said softly, ‘they will all have noticed it … and now, we shall see … now we shall know …’ He pressed his long, white forefinger to the brand on Wormtail’s arm.

The scar on Harry’s forehead seared with a sharp pain again, and Wormtail let out a fresh howl: Voldemort removed his fingers from Wormtail’s Mark, and Harry saw that it had turned jet black.

A look of cruel satisfaction on his face, Voldemort straightened up, threw back his head, and stared around at the dark graveyard. ‘How many will be brave enough to return when they feel it?’ he whispered, his gleaming red eyes fixed upon the stars. ‘And how many will be foolish enough to stay away?”
- Harry Potter and the Goblet of Fire, Chapter 33 (The Death Eaters)

He even tells the Death Eaters that the reason he had to go to the graveyard was because he needed his father’s bone for the potion.

“I knew that to achieve this – it is an old piece of Dark Magic, the potion that revived me tonight – I would need three powerful ingredients. Well, one of them was already at hand, was it not, Wormtail? Flesh given by a servant …

‘My father’s bone, naturally, meant that we would have to come here, where he was buried.”
- Harry Potter and the Goblet of Fire, Chapter 33 (The Death Eaters)

So, Voldemort called the Death Eaters to the graveyard because he was restored to a body there and he summoned them as soon as it had been restored.

Grindelwald’s rally was under the mausoleum.

“An opening suddenly appears in the wall of the mausoleum. All stare at the steps leading down into the earth. The sound of a gigantic crowd rumbles beneath them.

Before anyone can stop him, he runs down the steps. NEWT and TINA dash after him. LETA looks at KAMA, then follows NEWT. KAMA hurries after her.”
- Fantastic Beasts: The Crimes of Grindelwald

The rally took place in an underground amphitheater, so Grindelwald did not actually hold his rally in a mausoleum.

JACOB steps out of the narrow staircase into an underground amphitheater and is confronted by a terrifying sight.

Thousands of witches and wizards mill around, some already seated on stone benches. The atmosphere is edgy. Some are nervous but curious. Others excited, still others ready for a fight. Masked ACOLYTES steward the crowd.”
- Fantastic Beasts: The Crimes of Grindelwald

Therefore, he did not have a rally in a graveyard akin to Voldemort’s.

Not the answer you're looking for? Browse other questions tagged harry-potter voldemort fantastic-beasts death-eaters gellert-grindelwald or ask your own question.

8
Why can't the Voldemort's soul fragment in Harry find a new host
21
Does Harry Potter contradict any historical events?
19
Why does everyone think Leta is bad?
17
Why did Grindelwald have Antonio in his cell?
3
What happened to Grimmson?
1
Did this character's self-sacrifice grant magical protection for Newt and Theseus?
4
What caused the Lestrange family tree to wither?
2
Why did the Aurors not Apparate to flee Grindelwald in the Lestrange Family Mausoleum?