How many police vehicles are destroyed in the Terminator franchise?

Having just rewatched the first three Terminator films, there are a lot, and I mean a lot of destroyed cop cars (and helicopters). So many that it makes we wonder if it was something of an in-joke during the planning of the second and third movies.

Is there a comprehensive accounting of how many police vehicles are destroyed in each Terminator film (and the TV series)?

An answer saying every police car in the world, while technically an answer to the original wording of the question, misses the intent. To clarify, I'm looking for individually discernible vehicles that are apparently rendered to a mostly inoperable state on screen.

Some things to bear in mind before I get into the numbers:

With those point clarified, let's get into it...

40 minutes in: Kyle sideswipes a police car into a parked car.

41 minutes in: Kyle backs the car he's driving into a police car after it slams into a dumpster. It's unclear if this is the same police car that was sideswiped seconds earlier, or a different one. For the purposes of this count, I'm assuming it was a different car, since the way the first car spun around 180° suggests to me that it isn't the same one which is shown speeding directly toward Kyle and Sarah just three seconds later. But here's a Youtube clip of the scene in question, so you can judge it for yourself.

1 hour, 3 minutes in: The T-800 opens fire on Kyle and Sarah with an automatic rifle, as they speed out of the West-Island police station parking lot in a civilian car. There are several police cars parked in the lot, but none appear to sustain any damage.

Total = 3 police cars out of commission.

12 minutes in: The T-1000 steals a police car. This car is later driven to the Galleria mall and left there, undamaged as far as we know.

41 minutes in: The T-1000 steals another police car. This car is later driven to Pescadero State Hospital and left there, undamaged as far as we know.

1 hour, 5 minutes in: The protagonists hijack a police car in the underground parking lot of Pescadero State Hospital. This car takes a fair bit of damage during the subsequent chase sequence, but is still running the last time we see it.

1 hour, 54 minutes in: The T-800 perforates eight police cars with a minigun, then blows up two more with a grenade launcher. This is another one of those subjective scenes, so here's a Youtube clip which you can review for yourself.

2 hours, 3 minutes in: The T-1000 drives a police motorcycle out of a top floor window of the Cyberdyne Systems building and grabs hold of a police helicopter, letting the bike smash into the ground below.

2 hours, 6 minutes in: The T-800 hits the brakes on the SWAT van it's driving, causing the police helicopter the T-1000 is piloting to smash into the back of it. Seconds later, the van blows a tire and flips onto its side.

36 minutes in: The T-X smashes into a police car with the mobile crane it's driving. A second police car (which, like the first one, was being controlled by the T-X) was also involved in this chase sequence, but is no longer visible from this point forward, so I'm assuming it was knocked out of commission off-screen.

56 minutes in: The T-850 perforates several police cars with a minigun, causing one to explode. We're shown the T-850's POV assessment of the carnage, which helpfully informs us that 17 vehicles were destroyed. This likely includes the Toyota Tundra the protagonists drove to the cemetary in, since it was briefly visible on-screen next to the police car that exploded, so I've subtracted one vehicle from that total.

Total = 18 police cars and 1 police motorcycle out of commission.

Unless I'm mistaken, there were no police vehicles in this one.

34 minutes in: Kyle blows up the police car the T-1000 was driving with a grenade launcher.

1 hour, 27 minutes in: The T-800 smashes headfirst into an oncoming police car, but that car -- though heavily damaged -- is still running the last time we see it.

1 hour, 35 minutes in: The protagonists commandeer a US Coast Guard helicopter. This vehicle takes significant damage, but is still running the last time we see it.

1 hour, 38 minutes in: The T-800 smashes headfirst into the police helicopter John is flying, causing it to crash.

Total = 1 police car and 1 police helicopter out of commission.

6 minutes in: Three police cars receive minor damage during a scuffle between Grace and the officers. None appeared to be damaged heavily enough to be knocked out of commission though.

17 minutes in: The Rev-9 drives a dump truck through a wall, flipping one police car over, and causing another to collide with an oncoming car.

57 minutes in: The Rev-9 remotely steers an unmanned aerial vehicle into a police car, causing it to explode.

1 hour, 4 minutes in: The protagonists commandeer a US Customs and Border Protection helicopter. This vehicle takes minor damage, but is still running the last time we see it.

1 hour, 25 minutes in: The police helicopter being piloted by the Rev-9 comes under heavy fire, and crashes.

Total = 3 police cars and 1 police helicopter out of commission.

Update: I've now reviewed the first season of the TV series, and below are the notes I took in regard to any vehicular damage, or battles involving the police or FBI, shown on-screen. Thus far though, I haven't found any instances of actual police vehicles being destroyed in the TV series, so none of the following incidents have been included in the count.

1 minute in: We see Sarah and John apprehended by armed police officers, and placed in the back seats of separate police cars. A Terminator then shows up and starts blasting the cars with a shotgun and a pair of submachine guns, in an attempt to get to John. All of this is subsequently revealed to have taken place within a nightmare Sarah was having.

18 minutes in: While in pursuit of John, Cromartie opens fire with a handgun; several of the bullets strike a parked school bus, which 'he' then overturns. After pausing to survey the area and acquire John's position, Cromartie opens fire again, hitting several parked cars, before he's knocked down by a pickup truck driven by Cameron.

27 minutes in: Cameron tears the bull bars from what appears to be the same pickup truck 'she' was driving earlier, and does some work on the engine (possibly rigging it to explode).

33 minutes in: Cromartie tracks the protagonists down to the home of Miles Dyson's widow, Tarissa. While making their escape, the protagonists reverse Tarissa's car into Cromartie, knocking him down. He then stands up and opens fire on the car with an automatic rifle, before pursuing it on foot. The pickup truck is parked nearby, and Cameron remotely detonates it to knock Cromartie down again.

42 minutes in: The protagonists are time displaced from the year 1999 to the year 2007. They materialise in the middle of a busy road, but while this causes several cars to swerve and brake around them, none of the vehicles appear to sustain any significant damage.

4 minutes in: Cameron and Sarah hotwire a car in a parking lot.

8 minutes in: Sarah powerslides a motorcycle toward a running T-888 (Vick Chamberlain), causing it to hit him in the legs and trip him up. Seconds later, Cameron is struck by a speeding car, and her face penetrates the windshield.

41 minutes in: Cameron jams a bar of coltan against the gas pedal of a truck, causing it to drive over a cliff and into the sea.

9 minutes in: John is shown working on a car in auto class.

33 minutes in: A prisoner transport van carrying Derek Reese takes damage from Cameron, and subsequently Vick Chamberlain as well, but is still running the last time we see it.

39 minutes in: John uses Cameron's CPU to disrupt the new, computerised traffic control network in Los Angeles, causing chaos on the roads. We hear some apparent collisions, but no police vehicles are shown to sustain any damage.

35 minutes in: An FBI Hostage Rescue Team confronts Cromartie at George Laszlo's apartment in Reseda. Cromartie kills 20 HRT members, but no vehicles are shown to sustain any damage.

42 minutes in: Cameron attempts to start a car, triggering an explosive device planted by Margos Sarkissian, which blows the vehicle up.

At the start of the first film we see human civilisation in ruins. Although it's hard to put a specific number, my first instinct is to offer that every single police car in the world was likely destroyed, either in the initial blast or subsequently.

Note that some may have survived in suburban areas and countries not immediately targeted by Skynet's nuclear weapons or the massive Russian counterstrike, but were likely destroyed by Skynet's HK's afterwards. 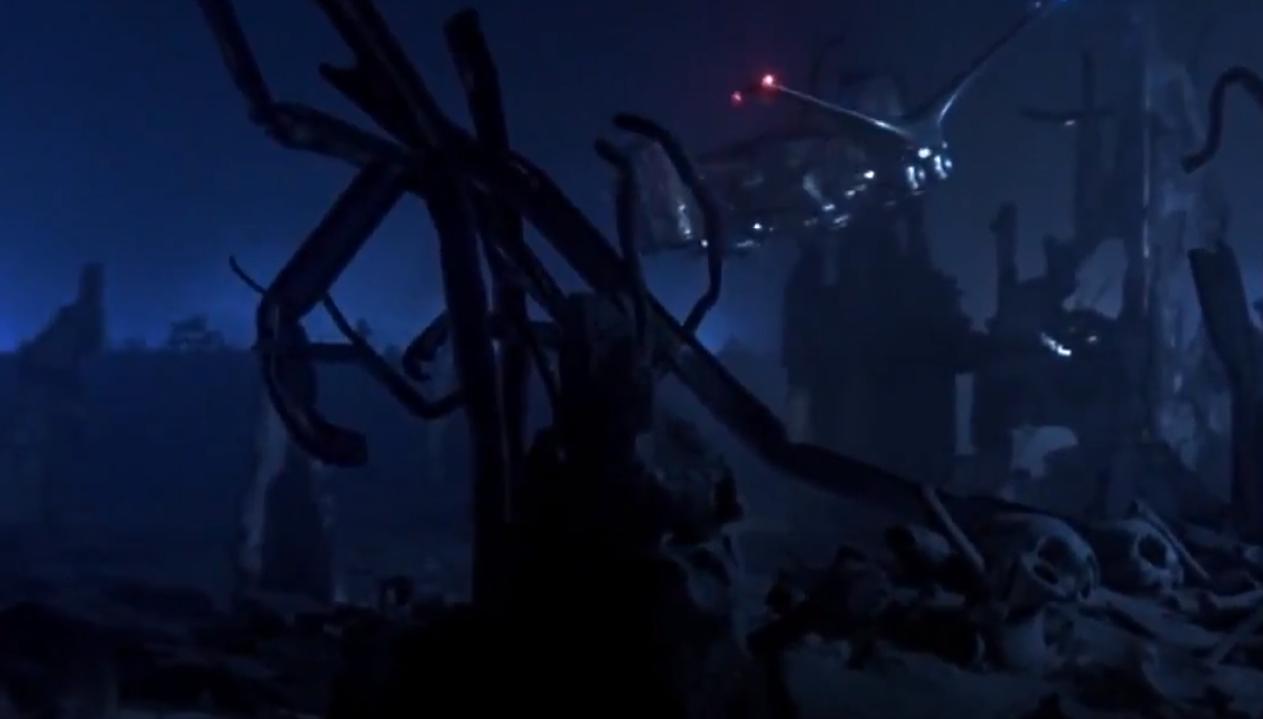 Obviously time-travel shenanigans cause this number to fluctuate between zero and all of them.