Old cartoon with a red? robot in a desert and a girl

I don't remember much except for a few scenes and it's been bugging me for a few years, because I think it had a really interesting story line; I just don't remember it. It was a show I watched on TV as a kid, maybe 15 years ago, but the cartoon is probably older.

I looked at similar questions and I thought it might have been Zentrix, because some elements match, but the animation style does not match. I'm pretty sure it was 2D animated, more anime style?

What I think I remember from the plot is that there were others that were trying to get/destroy the robot. Maybe because of a prism, but I'm not sure about this. I believe there was also a girl the robot was protecting, but the girl was also very concerned about the robot.

I vividly remember this scene where the red robot was in a desert and was standing on a hill, probably fighting. Also a scene where they were in front of a cave in the sandy surrounding and the robot was fighting. Another scene I remember was inside in maybe a ship/building on a metal bridge.

From what I recall it wasn't a giant robot, more adult sized.

Perhaps you're thinking about Gurren Lagann?

In a world ruled by the Spiralking Lordgenome, he forces mankind to live on isolated, desert islands (which are pretty massive and have lots of hills). Simon, a young driller, is forced to dig with his friend Kamina (whom he calls "Bro") in underground villages, which were created to hide from either the heat of the sun or Beastmen, a wild race of monsters who operated giant mechs. Simon, while drilling one day, happens upon a glowing drillbit pendant that is used to power up a large red robot. The Gunman, as mechs are called, was dubbed "Lagann" by Kamina, and could barely fit more than 2 people, being just a head with arms and legs. After meeting with a girl armed with a sniper rifle,called Yoko, they hijack a Gunman and steal it, the 2 Gunmen together form one. 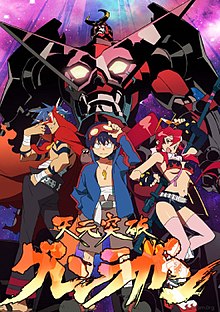 Yoko has shown to be fond of Simon, and often tries to get him to convince Kamina not to engage in reckless or dangerous stunts. Together, the three of them venture out to the overworld, determined to defeat Lordgenome and free mankind.

Hope this is what you're looking for.

14
Old cartoon or anime featuring a girl protected by a Red Robot
5
Cartoon Identification: Late-70s or early 80s robot Romeo & Juliet story
5
Cartoon with a tiger woman and a snake/serpent woman fighting in a cave
5
Cartoon in which a boy and girl travel with a robot
6
Anime about a girl who crashes on a planet and chased by an indestructible evil robot
5
Pre '96 cartoon: boy remote controls white robot