I've read various forums suggesting he is an Omega Level Mutant (I agree with others that this term maybe needs rewording or defining) however in my experience he has never been officially mentioned as Omega Level. Some feats that he has managed should put him at Omega Level.

As far as I can see Magneto should be Omega Level as I think he is powerful enough to alter the environments on Earth by doing something with the Earth's Magnetic Field which in theory this could destroy the world.

If someone could give some extracts/info on the limit of the his powers. It would be great

This is just a sign of what a lack of documentation and standards will get you. An unclear definition of exactly an Omega level mutant is, and who qualifies. So in the interest of this document, I will define an Omega-level mutant by what has been shown in the Marvel Universe.

My Definition of an Omega Level Mutant (unsanctioned by Marvel)

While no firm definition has been offered in comics, certain mutants have been confirmed/granted Omega-level status include:

The Omega has either a single power whose diverse usage and extreme power level allows them to perform a variety of feats at a level beyond any single Alpha’s ability; Magneto’s control over magnetism, Charles Xavier’s mental/telepathic prowess are two examples of this type of ability. (Though neither Charles Xavier nor Magneto's abilities have been confirmed as Omega-level. On the other hand, when their two powers were combined as Onslaught, they were easily the most powerful human entity on Earth to have ever existed.)

The other type of Omega has a wide range of powers that are normally found on entire super-teams and pushed to an obscene limit. Marvel’s Gladiator or the DCU’s Superman are an example of such a metahuman. Super-strength, superhuman levels of speed and reflex time, internal life support (proof against radiation, poison, no need to eat, sleep or excrete), invulnerability, energy projection powers, superior senses, and flight. What makes these two Omega-class is their virtually inexhaustible energy supplies. They are able to use their powers at full performance long after most Alpha-level mutants have become exhausted due to strain or fatigue.

Elixir: His mutant power is biokinesis making him capable of controlling the biological structure of any organic matter including his own body. It is suspected his powers will eventually grow to the point of allowing him to manipulate genetic structures or even mutant genes and powers.

Nate Grey/Jean Grey: Both are vastly powerful psionicists (users of mental abilities) capable of both feats of telepathic prowess and matter manipulation at the atomic level.

I would argue, given the range of abilities of Magneto as shown over the decades, he should be considered an Omega-class mutant for the same reasons these four have. He has a formidable power over a fundamental force, in this case magnetism, allowing him a wide range of capabilities, both in terms of raw power as well as skill and precision with using this ability making him a match for nearly any and all of the previously listed Omega-level mutants.

Magneto: Is capable of manipulating magnetic forces both at the macroscopic and the microscopic levels. He is known as one of the most powerful mutants on the planet and has fought single-handedly against entire super-teams including the Avengers and the X-men.

OMEGA LEVEL MUTANT: A mutant whose dominant power is deemed to register -- or reach -- an undefinable upper limit of that power's specific classification.

FOR EXAMPLE: Both Magneto and Forge are the most powerful mutants of their power types on the planet Earth [Magnetism and Technopathy, respectively], but what makes Magneto, and not Forge, an Omega level mutant is that the upper limit of Forge's measurable powers could hypothetically be surpassed [and, in fact, has by multiple humans on the planet], while the upper limit of Magneto's power cannot be surpassed in any measurable fashion.

Note: Omega level is a classification of a single mutant power. While it is quite common that mutants manifest multiple powers, only one is normally of Omega level.

FOR EXAMPLE: While Jean Grey is both a telepath and a telekinetic, she is only an Omega level telepath. 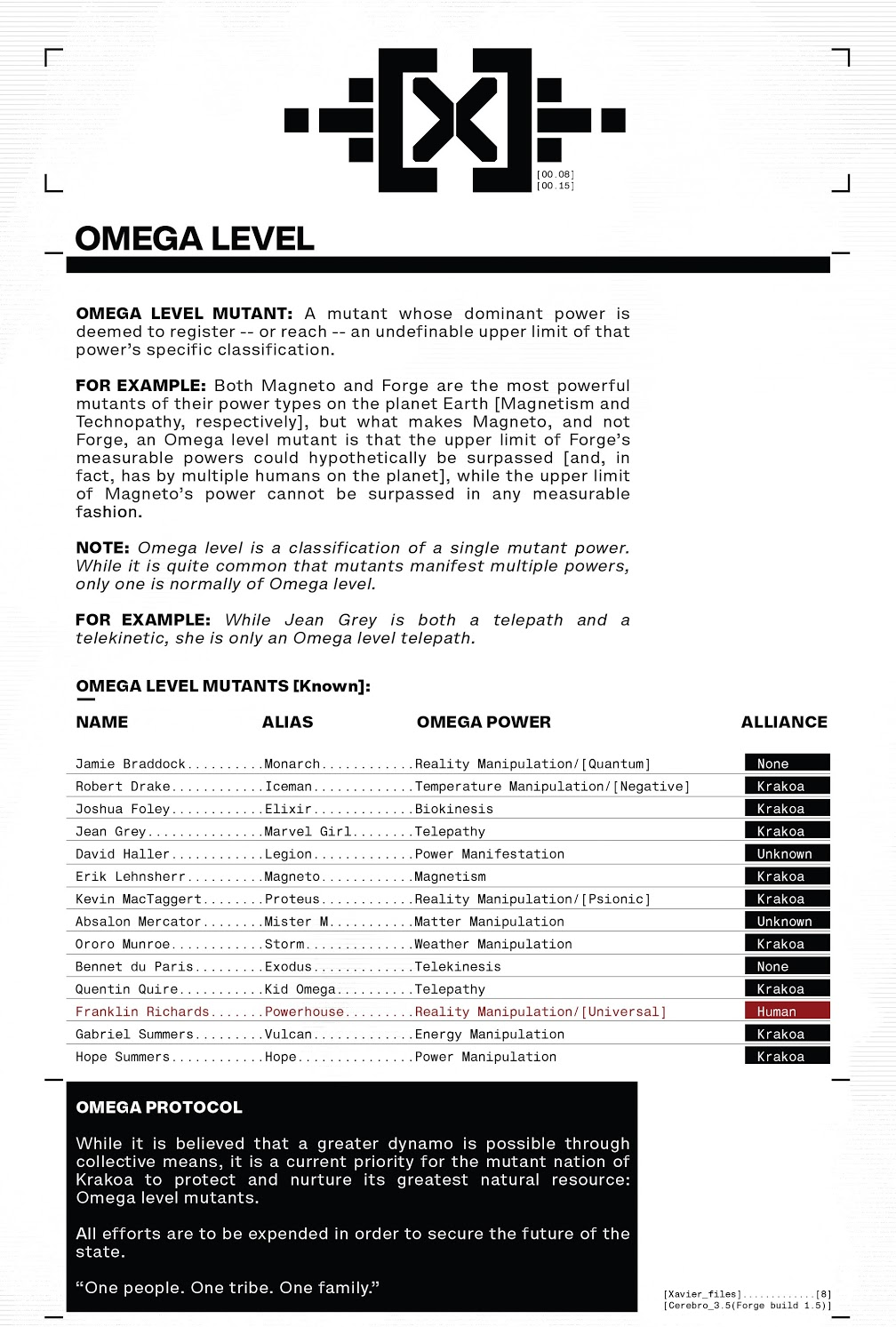 No, he isn't officially an Omega level mutant, although he potentially is.

The problem is that there isn't a formal definition for what an Omega level is. From the wikipedia section on Marvel's Omega level mutatants:

No firm definition has been offered in comics. Examples of mutants that have been confirmed as Omega-level include Jean Grey, Vulcan, Rachel Summers, Iceman, Legion, Elixir, and Franklin Richards.

I guess neither Magneto or Professor X allowed anyone to find out the limits of their powers. Both were very smart and let anyone to capture them in order to check their true limits.

If you take reference from the films, Charles told Eric that if Eric accessed the good inside himself, he would possess a power that no one could match, not even Charles. Now in X-Men Last Stand he was already old and obviously without access to that good that Charles mentioned, so he was not at Jean's level, but maybe younger and without his blinding hate for humans, he could be even more powerful than Jean.

8
Why does Magneto not exhaust himself? Where does he get his energy from?

7
Magneto lifting and throwing humans?
2
Can Magneto control light as well?
14
How does Magneto shave while in prison?
19
Was President Kennedy a mutant? Or, did Magneto lie?
3
Can Magneto hack computers with his powers?
5
Can Magneto detect magnetic objects without seeing them?
13
Can Magneto perform induction heating?