Confusing movements of Lannister Armies under Jaime and Tywin?

I'm currently reading A Game of Thrones for the first time and I have gotten to the point where Robb is explaining his plan at Moat Cailin. This is a highly geeky question, so I apologize in advance!

The problem is that I can't make sense of what Robb claims the Lannisters have been up to (p582). According to him:

“Less than a fortnight past, they fought a battle in the hills below the Golden Tooth,” Robb said.

“Uncle Edmure had sent Lord Vance and Lord Piper to hold the pass, but the Kingslayer descended on them and put them to flight. Lord Vance was slain. The last word we had was that Lord Piper was falling back to join your brother and his other bannermen at Riverrun, with Jaime Lannister on his heels. That’s not the worst of it, though. All the time they were battling in the pass, Lord Tywin was bringing a second Lannister army around from the south. It’s said to be even larger than Jaime’s host.

“Father must have known that, because he sent out some men to oppose them, under the king’s own banner. He gave the command to some southron lordling, Lord Erik or Derik or something like that, but Ser Raymun Darry rode with him, and the letter said there were other knights as well, and a force of Father’s own guardsmen. Only it was a trap. Lord Derik had no sooner crossed the Red Fork than the Lannisters fell upon him, the king’s banner be damned, and Gregor Clegane took them in the rear as they tried to pull back cross the Mummer’s Ford. This Lord Derik and a few others may have escaped, no one is certain, but Ser Raymun was killed, and most of our men from Winterfell. Lord Tywin has closed off the kingsroad, it’s said, and now he’s marching north toward Harrenhal, burning as he goes.”

I can't make any sense of where these armies are supposed to be coming from, or where are they going? 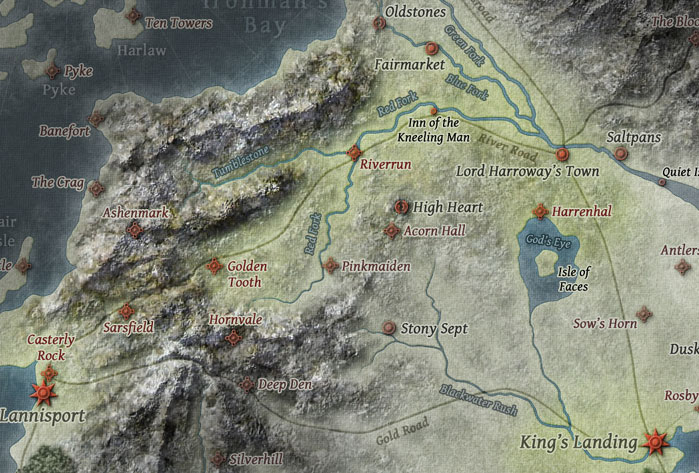 Jaime apparently marched out of Casterly Rock, taking Vance and Piper on at Golden Tooth and forcing them to retreat towards Riverrun. That makes sense.

But how did the men Eddard sent from King's Landing (Lord Beric and company) to take on Tywin's army, get to the Red Fork before they were attacked? And how did Tywin's force then start heading "north" toward Harrenhal, when they were already north of it (at the Ruby Ford)?

Can anyone explain? I've probably misunderstood something. Thanks!

I think you have mixed the armies up. Lord Beric Dondarrion was not sent to oppose the Lannister forces, he was sent out to deal with Gregor Clegane, who was assumed to be acting on Lord Tywin's orders, though in truth no one had any proof of that. Ned Stark saw this as an attempt by Tywin to goad the Riverlords into starting the war, by taking their revenge on the westerners. I do not believe that Tywin and Gregor Clegane ever fought together, and that Dondarrion's party was ambushed by Clegane and some other force of Lannister men.

I believe Tywin made his way around south, like the first quote says, to close the Kingsroad north of King's Landing, and nothing else (at this point). It was, I believe, his intention to allow Clegane to roam free and not be directly associated with his atrocities.

So in essence: The armies are all coming from the West, Lord Tywin's and his bannermen's domains, and they are going out into the Riverlands, Tywin from the south and Jaime from the west. Clegane and Ser Amory Lorch were already there, killing and burning. Later on it is mentioned that Ser Stafford Lannister, an uncle of Jaime's, is killed with a new host of recruits at the battle of Oxcross, an army coming also from the westerlands going to the riverlands.

At the beginning, Lannisters amassed a large host at Casterly Rock. Upon hearing about Lannister mobilization, Edmure Tully also called his banners and sent a small force Commanded by Lords Vance and Piper to guard the pass at Golden Tooth. This was necessary because Golden Tooth was last Lannister stronghold on River road which leads from Heart of Casterly Rock directly to Riverrun.

NOTE: To zoom the maps, you have to click on them. 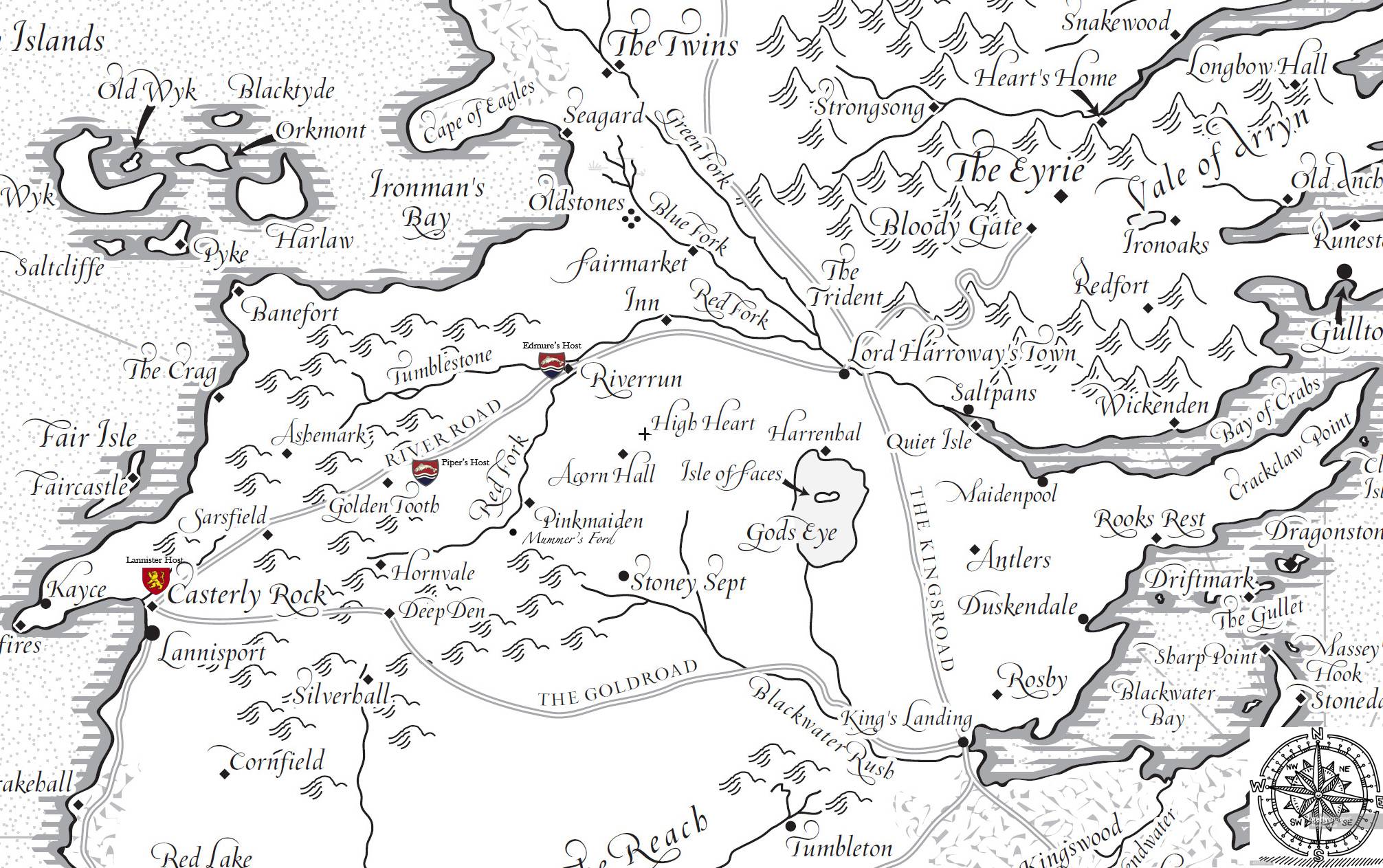 On the map, you can see exact positions of all the hosts. At this time, Jaime is on his way to Casterly Rock after wounding Eddard Stark & Gregor Clegane is unleashed on Riverlands. The Mountain circumvents Lord Piper's Troops in Pass beneath golden tooth, crosses the red fork and massacres smallfolk in Sherrer and Mummer's ford. The Lannister main host however is still positioned at Casterly Rock.

The Battle in the Hills below Golden Tooth

the Kingslayer descended on them and put them to flight. Lord Vance was slain.

The Lannisters quitely followed the River Road North-Eastwards and descended on Piper's host below Golden Tooth. Jaime Lannister was commanding this host and he completely surprised his foe. The result was a crushing defeat for the Tullys.

Piper took the survivors and made to Riverrun to join Edmure's host but Jaime kept chasing him all the way to Riverrun.

All the time they were battling in the pass, Lord Tywin was bringing a second Lannister army around from the south. It’s said to be even larger than Jaime’s host.

Robb was situated in north at the time so Tywin's army was indeed south to him.

Tully's did not know that another Lannister Army commanded by Lord Tywin was already on its way to Riverlands via the Gold Road. Tywin struck Eastward on this road with the junction between Kingsroad and Gold road as his target. 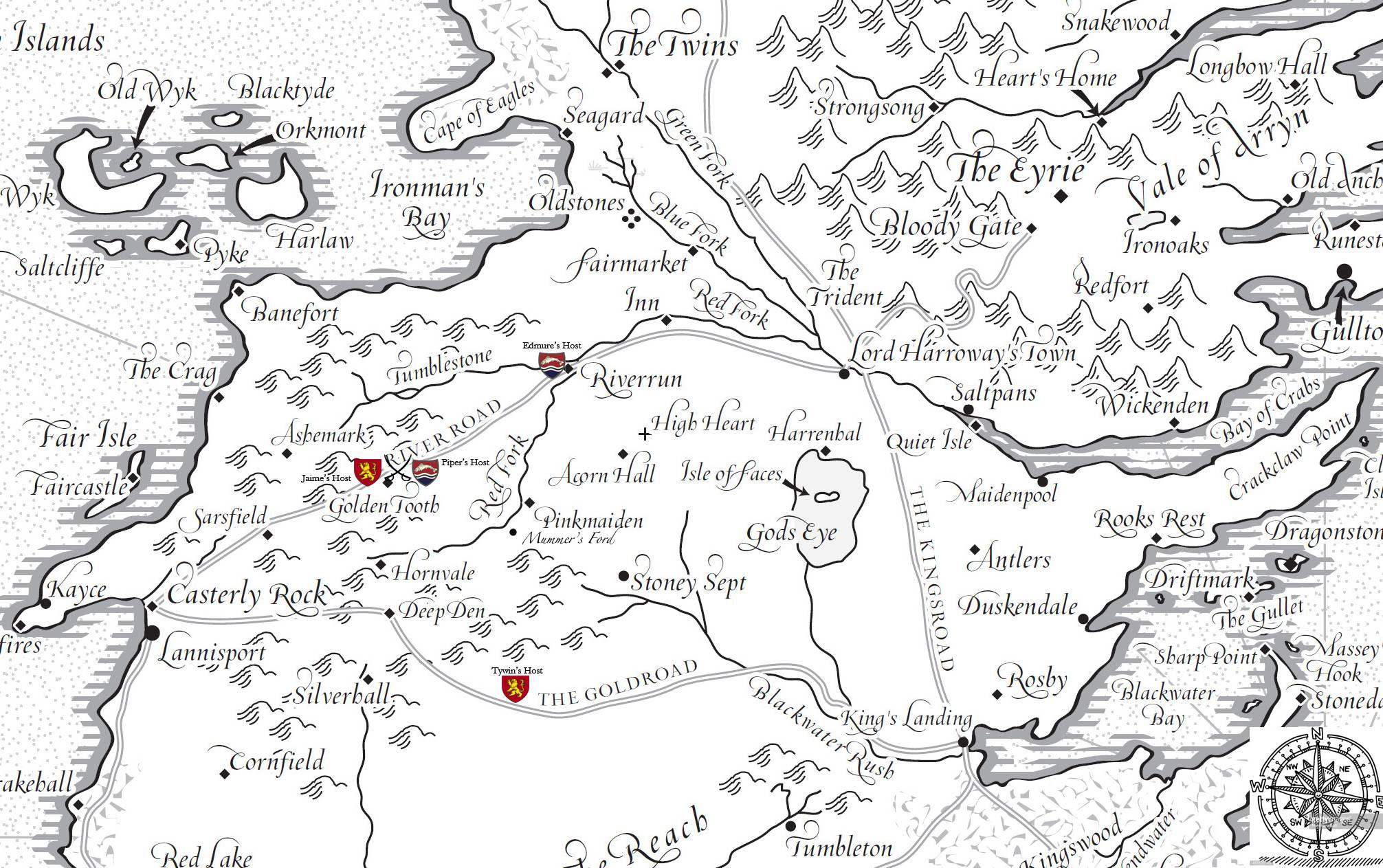 As you can see in the image, the battle at the Golden Tooth and movement of Tywin's Army in the South, moving Eastwards.

Battles At Mummer's Ford and near Riverrun

Lord Derik had no sooner crossed the Red Fork than the Lannisters fell upon him, the king’s banner be damned, and Gregor Clegane took them in the rear as they tried to pull back cross the Mummer’s Ford.

By that time, Iron Throne had received the complaints of Riverlords about the raids conducted by the Mountain. Eddard Stark commanded Lord Beric Dondarrion to execute Ser Gregor Clegane in the name of King Robert I Baratheon. Eddard did not send Lord Beric to take on the entire military of Westerlands, that's Robb's wrong assumption.

Lord Beric rode from King's Landing and cut cross country into Riverlands in Western Direction. To enter the Westerlands (Domain of Lannisters), he needed to cross the Red Fork of trident river. He decided to make the crossing at Mummer's Ford. What awaited him there was an ambush. When he tried to fall back to Mummer's ford, Gregor Clegane blocked his retreat and attacked him from rear.

Afterwards, Jaime fell upon the Tully Troops assembled outside Riverrun. Another defeat for House Tully occurred. Jaime took Ser Edmure Tully as his Captive and laid siege to Riverrun.

All this While, Lord Tywin kept advancing towards Kingsroad in North-East. 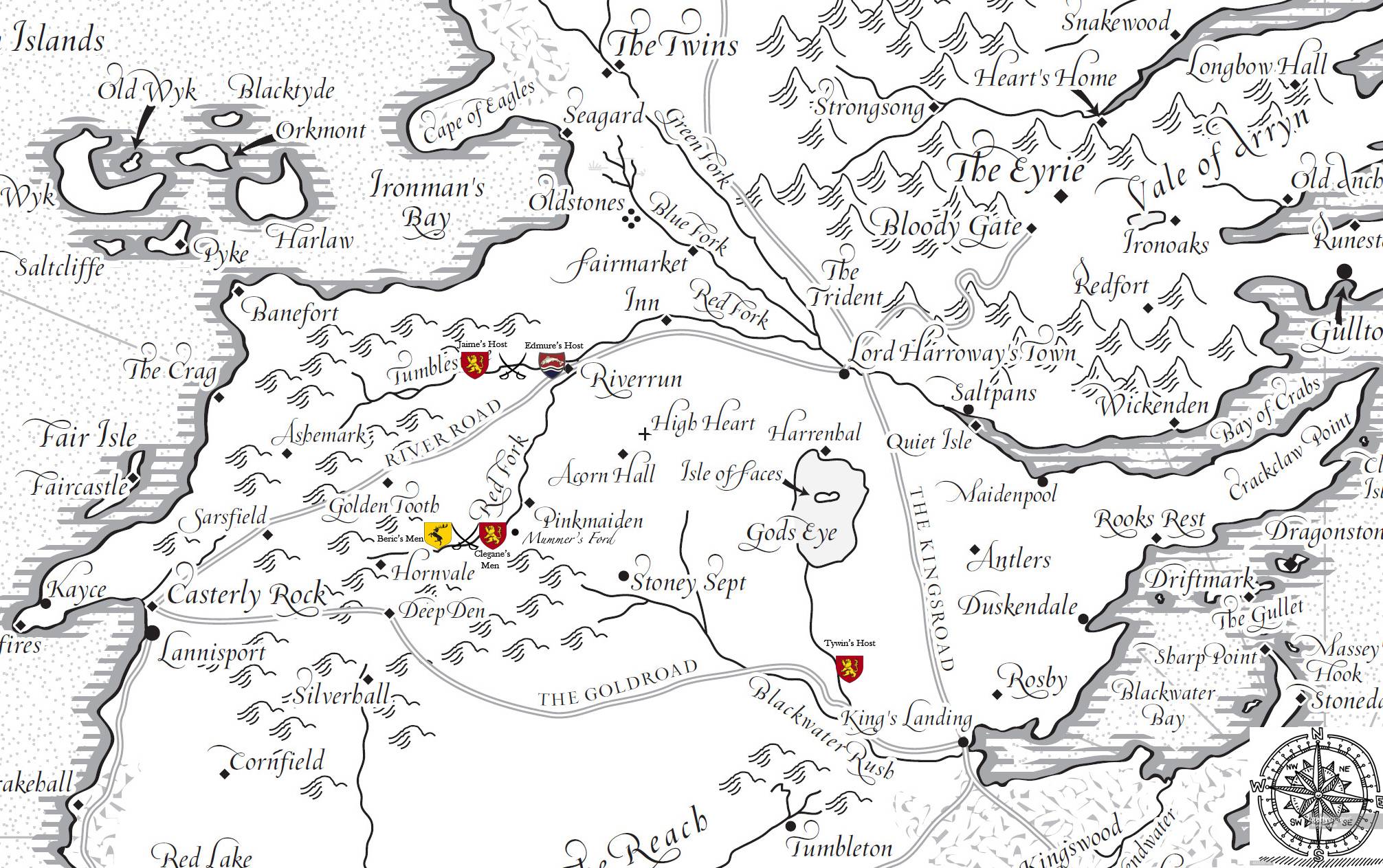 You can see locations of battles of Riverrun and Mummer's Ford on the map. You can also see Tywin's Advance in Riverland-Crownlands axis from the South.

Lord Tywin has closed off the kingsroad, it’s said, and now he’s marching north toward Harrenhal, burning as he goes.

As you can see in the Map, Tywin has now closed off Kingsroad for KL-bound traffic coming from North, Vale and Riverlands. His line of advance is showed by a red arrow. He was moving North towards Harrenhal. There he would move to capture the castle from Lady Shiela Whent. Then he will move further North to Lord Harroway's Town. There he will occupy the Ruby Ford and wait for the Starks & Arryns to come and try to relieve Tullys. Ruby Ford is the only crossing available if the Freys refuse anyone to use their bridge. Tywin had kinship with Walder Frey due to marriage between his sister and Frey's son. Also, Frey was a cautious man so Tywin assumed that Starks will try to force a crossing at Ruby's Ford. So as you can see, Tywin did not magically teleport to Ruby Ford. He had to March East and then North towards Harrenhal and then to Ruby Ford. The Cross-road inn was a strategic point which guarded the approach from Vale and North to Riverlands. It was to be expected that Arryns and Starks will come to aid of Hoster Tully as Lord Stark was Lord Tully's son in law and Lord Arryn was Lord Tully's grandson.

At the same time, Jaime completes siege of Riverrun from all three required directions by dividing his army into three camps. 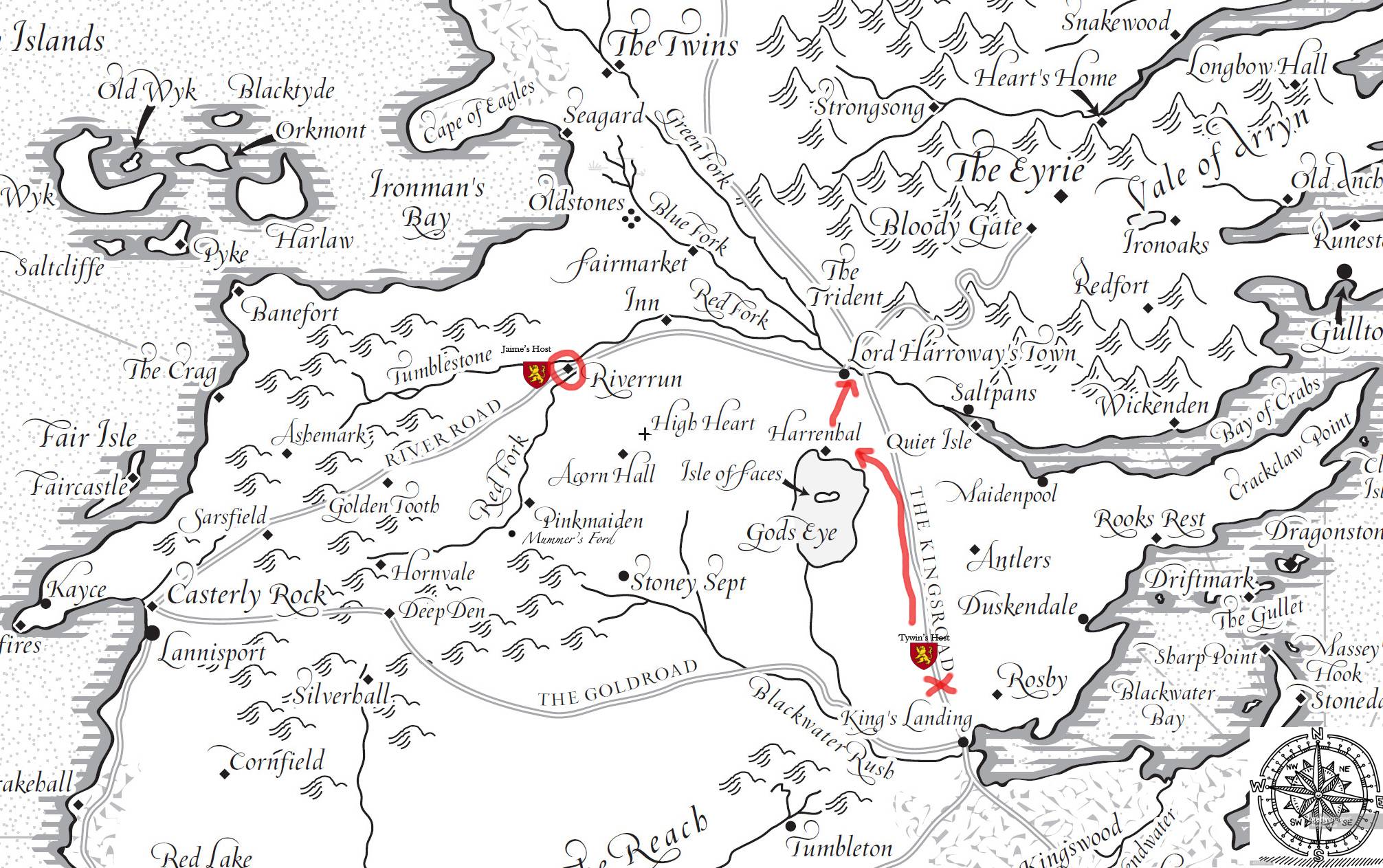 If you wish to see graphical representation of events that followed these developments, you can see my previous answer here regarding Robb's advance, Battle at Green Fork, Battle of Whispering Woods & Battle of the Camps.

I don't read the series, so I may be mistaken in a few things, but I can see 3 possible misunderstandings based on the quote and map:

The "kingsroad" I'm uncertain about, but it looks like "road" label north of Lord Harroway's Town could be the name cut off, and the road continues down towards King's Landing? The rest, however, implies that the road between Casterly Rock and Riverrun is another "kingsroad" (meaning the name changes at Riverrun), since the name in the dialogue isn't capitalized, even though the map posted doesn't actually indicate that part of the road having a different name.

Jaime's force was in and around Casterly Rock when Robb's men entered the passes near the Golden Tooth.

He brought his army East out of the passes and met this Stark force in battle.

Meanwhile, simultaneously, Tywin is marching his force from south of Casterly Rock, probably along the Gold Road toward Kings Landing. Arriving north of that city on the king's road he proceeds north along the King's Road, toward Harrenhal.

Meanwhile, and again at the same time, Gregor Clegane and Lord Deric, are sparring over the crossings of the Red Fork, including Mummers ford.

31
Why did Robb attack Tywin Lannister's Army at the same time as his surprise attack on Jaime?
6
How did Tyrion find Tywin's host in the Riverlands?

23
Why did Tywin Lannister already have his army mobilized as the North marched south?
31
Why did Robb attack Tywin Lannister's Army at the same time as his surprise attack on Jaime?
14
What happened to Ice, Eddard Stark's Valyrian steel sword?
90
Is there any proof that Jaime Lannister is actually a good swordsman?
10
Why do Hoster and Edmure Tully not rally their forces?
7
Why would Tywin allow Jaime Lannister to fight in dangerous battles
18
How did Genna Lannister disappoint Tywin?
19
Why didn't Jaime Lannister tell everyone about Aerys's wildfire plans?
12
Does Jaime Lannister have dyslexia in the books?