How many Doctor Who episodes have there been where we don't see the Doctor?

After watching all of the modern episodes, I can't think of an episode where we don't see the Doctor at any point. Are there any (classic or modern) episodes where we do not?

Actually, we have no way of knowing, due to the fact that there are an unknown number of lives (the Timeless Children). If we see anyone at all in the episode, they could theoretically be the Doctor. So actually the question is: Are there any episodes where nobody confirmed to be the Doctor is shown?

(Spoiler for "The Timeless Children")

The "Doctor Who 20th Anniversary Special" issue of the Radio Times identified "Mission to the Unknown" as the only episode of Doctor Who without the Doctor and featured this production still. 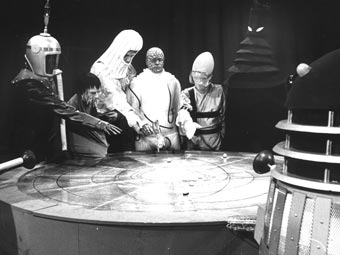 Moreover, according to the "Doctor Who 20th Anniversary Special," the production of "Mission to the Unknown" was an afterthought, and the story was developed while planning for the "The Daleks' Master Plan" was already well underway (or possibly even after "The Daleks' Master Plan" had been filmed), and the extra episode was produced while the main cast were actually on a brief common holiday period. This may or may not be correct, however. The information about the early days of the show that appeared in the "Doctor Who 20th Anniversary Special" was largely based on the understanding of the then-current 1980s production staff, along with an incomplete examination of the records from the 1960s. For stories that had not been seen in fifteen or more years and were now longer preserved in the archives, this information was not always correct. In the meantime, other resources for reconstructing these early episodes, that were apparently unknown in 1983, have been uncovered; for instance, I don't think it was known in the 1980s that the audio for all the missing episodes had been preserved (by people who made home audio recordings when the shows originally aired).

The plot summary, per Wikipedia:

On the planet Kembel, Marc Cory and Gordon Lowery of UN Deep Space Force Group 1 attempt to repair their spaceship to reach their rendezvous when they are attacked by their crew member Jeff Garvey, who was in a violent state of mind upon waking up in the jungle. Cory shoots Garvey dead when he was about to fire at Lowery, pulling out a long thorn from behind his ear. Bringing Lowery into the spaceship for debriefing, Cory explains himself to be a Space Security agent assigned to investigate a possible Dalek base for universal invasion with the presence of a Varga plant confirming their presence. Outside, Garvey gradually mutates into a Varga. At the Daleks' base, Dalek Supreme is informed that the representatives from the seven planets will soon arrive while sending a Dalek platoon to destroy Cory and Lowery.

Cory stands guard against the slow-moving Varga plants while Lowery finishes building a rescue beacon. They notice a spaceship flying above them, Cory deducing the Daleks are planning something big. As Lowery was about to record a message, Cory notices something moving in the jungle, ducking behind some bushes. The Dalek platoon arrives and destroys their ship with Lowery accidentally stabbing his hand on a Varga thorn as he and Cory flee. In the Dalek base, the representatives from the seven galaxies have gathered in a conference room. Dalek Supreme assures representative Malpha that the human intruders will be dealt with. Cory is forced to kill Lowery upon learning he became infected and records a message, only to be surrounded by the Daleks and exterminated before he could launch the beacon. Back at the Dalek base, the representatives all approve in forming an alliance with the Daleks' plan to take over the Solar System while chanting "Victory."

Since the "Mission to the Unknown" was only a single, relatively self-contained episode, and it did not include any of the iconic regular cast, it has been recreated in live action and is available to view online. (I am not sure whether they recorded new audio with the actors doing the recreation, or whether the original audio from 1965 was cleaned up and reused.)