Was reading a book which described aliens with knees that bent backwards (like an ostrich) and I remembered a scene from a movie and wanted to identify it.

Its probably from the 90s. I believe aliens are infiltrating Earth and either trying to set up terraforming stations to convert the earth to be more to their liking, or setting up a communication device. (Pretty sure it was terraforming)

I am NOT talking about either of "V" or "Them"

The Protagonist is more or less alone (no one believes him when he tells them what is going on) trying to sabotage their plans, while they are trying to kill him. [Using his intelligence to stop them as opposed to picking up guns ever 10 minutes and killing them all]

The scene I remember: At the end of the movie, they are fighting in a radio telescope tower. Similar to this.

The some of the aliens chasing him deploy an implosion grenade in the control room under the tower that creates a mini black hole effect that over 30 seconds gradually sucks everything nearby into it, destroying the building and dropping the dish down on to it. (The aliens dying in the collapse)

The protagonist has survived, and a 15(?) year old African-American neighbor who had been doing minor errands for him/asking "whats he doing", and was with him at the radio tower, turns out to have been an alien who has been spying on him. He then twists his legs around so his knees are backwards and runs off at 40mph.

In an earlier scene I remember the aliens had deployed one of the implosion grenades in the protagonist's house to suck up all the info/maps/charts he had collected on their activities so he had no evidence. (pretty sure it stripped the house bare, furniture and all.)

The movie is The Arrival (1996) with Charlie Sheen.

After astronomer Zane Zaminski (Charlie Sheen) discovers a radio transmission that originated from space, he tells his boss, Phil (Ron Silver), who ignores him. Zane is promptly fired, and decides to investigate the signal himself. When he discovers a return radio transmission from Mexico, he goes to explore. There he meets climate scientist Ilana Green (Lindsay Crouse), who is studying anomalies in gases in the area. Zane soon makes a shocking finding that puts him in great danger. 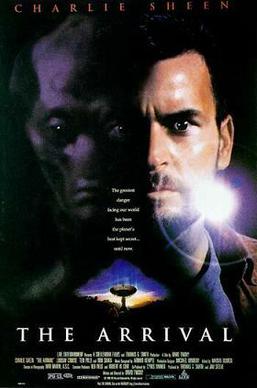 11
Which kids movie, from the 80s involved aliens with guns that could be powered by pennies?
18
Movie where Earth is conquered and humanity are cavemen slaves
12
Story about a man and an alien exploring an alien world
15
Looking for sci-fi book about alien invasion where Earth builds a giant laser to stop an incoming alien fleet
2
Movie or tv scene with many species of aliens
4
Mid 80s movie about 3 mute aliens and telepathic woman
7
1970's or 80's time travel movie/TV episode with aliens
9
Anime movie about space aliens and robots
10
Science fiction book series about aliens that look exactly like humans, protagonist tries to rescue her brother from a government camp ran by aliens
8
Animated movie about space farmers and BIG blue aliens that had more then one eye and were taught how to do kung-fu by protagonists father