Who is this character in Loki?

In Season 1, Episode 2 of Loki, we are finally shown the Variant that has been creating trouble for the TVA in the Sacred Timeline. Who is this character supposed to be? 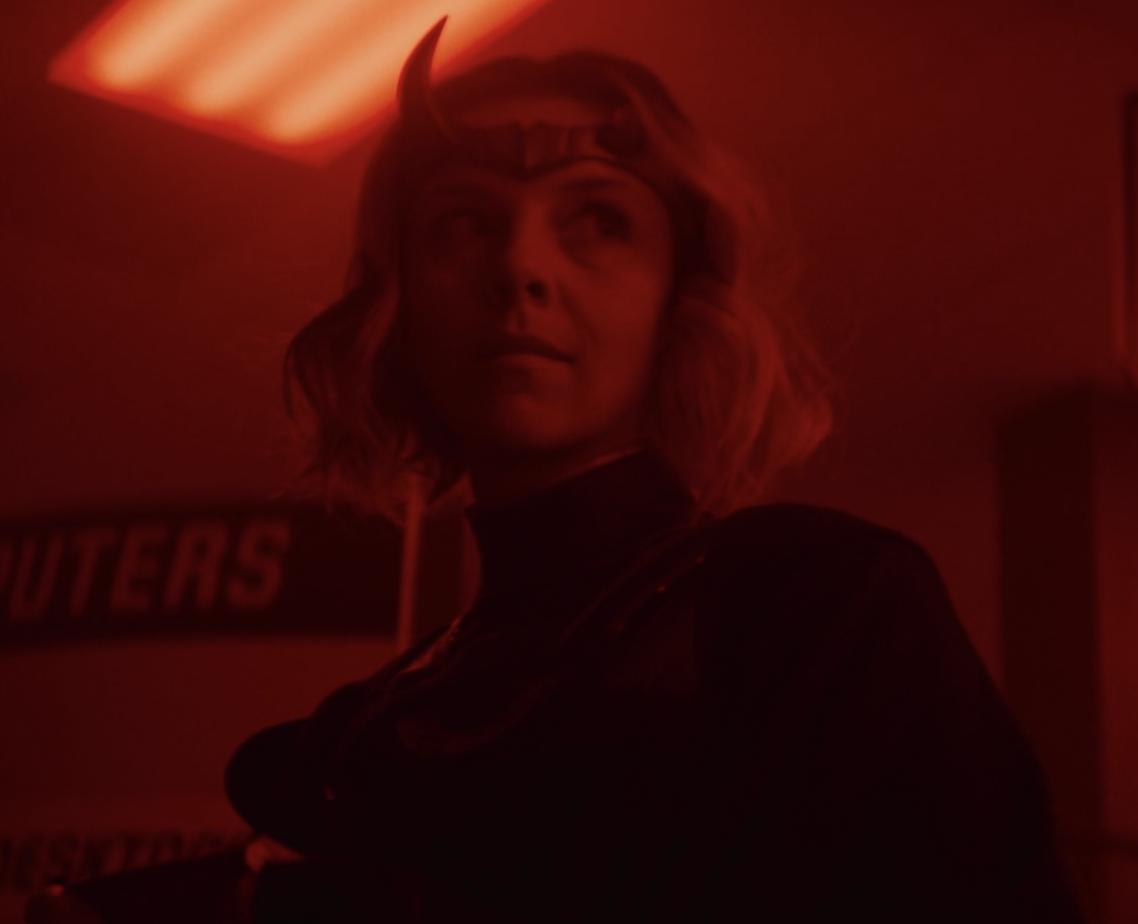 Within the show, it's been repeatedly stated that she's a variant of Loki.

MOBIUS: Here's the deal. When we get out on the branch, we're not just looking for a Time Criminal. We're looking for a Loki. A variation of this guy. A type we should all be very familiar with, because the TVA has pruned a lotta these guys, almost more than any other Variant. And no two are alike. Slight differences in appearances, or not so slight. Different powers, although, powers, generally include shape-shifting, illusion-projection, and my favorite...

LOKI: Have any of you met a woman Variant of us?

This has been confirmed to be true, both by the actress playing the character, Sophia Di Martino, and by the director of Loki Season 1, Kate Herron.

SOPHIA DI MARTINO: I think the story we're telling isn't necessarily about genderfluidity, but that Sylvie is a variant of Loki, but she's Sylvie, a character and a person in her own right.

KATE HERRON: The main thing I would say is: Lady Loki in the comics is a very different character to our character, obviously. I love that character and I think she's got a very different journey. But our Sylvie is a female Loki, in that sense -- because in episode 1 and 2, they know it's a Loki they're tracking -- but I think that's part of the discussion. It's almost like Loki -- as in Tom Loki -- he's like, "Wait, how much of my life have you got? Who are you?" And I think that's the real question is, who is she? So, we will discuss that as the show goes on. Why does she not like being called Loki? What's her past? Where did she come from?

She doesn't like to be called 'Loki' anymore though, and currently goes by the alias 'Sylvie.'

SYLVIE: What part of imminent death confuses you? And don't call me "Variant."

LOKI: I'm sorry, but I'm not calling some faded photocopy of me "Loki."

SYLVIE: Good. 'Cause that's not who I am anymore. I'm Sylvie now.

LOKI: You changed your name. Brilliant.

SYLVIE: It's called an alias.

She said she was born a goddess, which implies that she was born female, rather than being born male and then changing her sex.

SYLVIE: I remember Asgard. Not much, but I remember. My home, my people, my life. The universe wants to break free, so it manifests chaos. Like me being born the Goddess of Mischief.

The bits and pieces of info we've been given about her background suggest that -- like Hiddleston's Loki -- she was born on Jotunheim as the biological offspring of the Frost Giant, Laufey, before being adopted and raised by Odin and Frigga on Asgard.

She certainly told Hiddleston's Loki that she was adopted...

SYLVIE: Are you sure she was your mother?

LOKI: Oh, no, she's not actually. I was adopted. Is that a bit of a spoiler for you? Sorry about that.

SYLVIE: No, I knew I was adopted.

LOKI: What? They told you?

SYLVIE: Yeah. Did they not tell you?

LOKI: No. I mean, they did, eventually.

... and around the 20-minute mark in Loki S01E02, we briefly see a TVA file with the name 'Sylvie Laufeydottir' printed on it. 'Laufeydottir' translates from Norwegian to English as 'Laufey's daughter'. 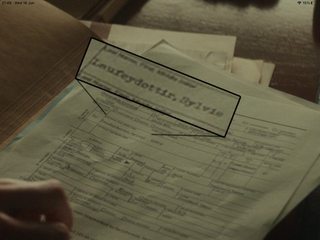 Speaking of the TVA, we saw in Loki S01E04 that that a group of Minutemen (led by Ravonna Renslayer) kidnapped Sylvie from Asgard when she was a child, and reset her timeline. She managed to escape not long afterwards, by stealing Renslayer's TemPad, and has been a fugitive from the TVA ever since.

SYLVIE: I remember Asgard. Not much, but I remember. My home, my people, my life. The universe wants to break free, so it manifests chaos. Like me being born the Goddess of Mischief. And as soon as that created a big enough detour from the Sacred Timeline, the TVA showed up, erased my reality, and took me prisoner. I was just a child. I escaped. Stole a TemPad and I ran for a long, long time, which really sucked. Everywhere and every-when I went, it caused a nexus event. Sent up a smoke flare. Because I'm not supposed to exist. Until, eventually, I figured out where to hide. And so that's where I grew up, the ends of a thousand worlds.

As you can see in the image above, Sylvie was shown to have dark hair as a child. Kate Herron confirmed that her blonde hair as an adult is a product of hair dye.

In regard to whether or not Sylvie is based on any existing comicbook characters, Sophia Di Martino has stated that Sylvie is her own character, with a new backstory.

SOPHIA DI MARTINO: The character is Sylvie and she's her own character. The show is inspired by the comics and by lots of different things in the comics, but our story is a brand new story and a new backstory for Sylvie.

That said, the basic idea of having a female Loki variant is almost certainly inspired by the female Loki from the comics, informally known as 'Lady Loki.' In particular, Sylvie bears a strong visual resemblance to Lady Loki's depiction within the Loki: Agent of Asgard series. 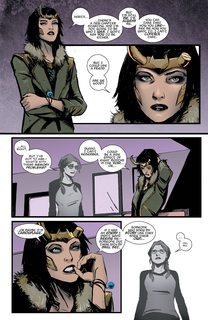 The name 'Sylvie' might've been borrowed from Sylvie Lushton, a human granted powers by Loki in the comics. 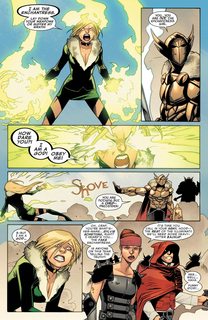 She is, as confirmed by Tom Hiddleston, a variant of Loki.

Can you talk about working with Sophia Di Martino? Since she’s playing essentially a version of you, is there anything she borrows from your portrayal, and what are the odds that there’s some kind of deeper relationship between you two? Because I feel like it would be pretty interesting if the one person that Loki falls in love with is a version of himself.

TH: That would be interesting. I think the idea, it seemed so rich that Loki would be confronted with himself. Not maybe just in a metaphorical way, but in a physical externalization. I absolutely loved working with Sophia. She had lots of questions for me, and my experience of playing the character, and various things that I had found interesting in the long history that the character has been around in human consciousness. But what was so wonderful is that she authored her own character completely. She had all her own ideas and inhabited it in her own way. Then the joy was putting the two of them together and seeing how they react to each other. Yeah, there’s lots of opportunities in there.

8
If the TVA exists outside of time, why are there still nexus events?
3
Does Loki exist both in the Sacred Timeline and the branched timeline simultaneously?
8
What is this creature seen at the TVA in episode 1 of Loki?
39
How did Loki create a nexus event in Endgame if Endgame was "supposed to happen"?
20
Why doesn't Loki look like a Frost Giant in the TVA?
11
Who truly is the character behind the TVA?
5
How does He Who Remains dictate what happens?
17
Is there a difference between timelines and universes in the MCU?
12
Does Dr. Strange know about Kang the Conqueror?