All I can really remember is that the gist of it was that these people would give pills to kids and old people that would make them switch bodies for a day.

At some point some kids noticed that another was acting strange (kid was very hyper, running around and eating so much junk food).

I remember two characters, one was a teenage boy with blonde hair, who had to leave his farm, and the other was a girl with long red hair.

The cover of the book was actually of the girl. I think she's running towards a cornfield?

The kids, I believe, decide to escape and I think they use a pig as a distraction? The main character actually switches bodies with an old person, which is how he found out about the place's true intentions.

Might this be The One Safe Place (2014) by Tania Unsworth?

This review indicates that the protagonist, a boy named Devin, grew up on a farm, but heads to the city after his grandfather dies, and meets various children surviving on the streets, including a girl named Kit. They're then lured by another kid to a children's home, where they can eat whatever they want and play all day. Sounds great, except for the disturbing behaviour of some of the kids there. The review also mentions a 'psychic pig.'

Tania Unsworth has conjured up a curious mix of dystopian future and Billy Bunter at Greyfriars that is quite disturbing. It begins on a farm where young Devin is working with his Grandfather, learning all he can about farming and caring for animals, but sadly his grandfather dies and Devin is unable to cope and sets out to the city to find someone who might want to come and live on the farm and work.

But this is no ideal world. Most of the countryside is abandoned, climate change has wreaked havoc and when he finally arrives in the city he discovers that the difference between rich and poor is immense. He’s a country bumpkin here, and it’s crawling with feral kids who’ll think nothing of beating you senseless and stealing all you’ve got.

Devin meets Kit, an eleven-year old girl surviving on her own, stealing little treasures she keeps on the roof of an abandoned building. She reluctantly teaches Devin to be streetwise and where to go to shelter from the rare moments it rains. He learns to steal although it’s against his nature.

Enter Roman, a confident kid who lures Devin to a 'safe place' where kids are treated special and get plenty to eat. Devin won’t go without Kit, but the deal is struck and suddenly they are whisked of to a kids paradise where they get to have as much jelly as they can eat and they get to play all day and no school.

Kit loves it but Devin is wary. Why are all these kids who go to the 'place' stuck in some nightmare dream? Why do they do weird things when they come out? The Administrator thinks he is unique and has special talents. Devin can hear the music of stars, but what use is that to anyone he thinks? What is really going on in the Gabriel H Penn Home for Childhood and who are the visitors spying on them?

Tania Unsworth has created a curious book here. Creepy yes, but if set in the future that is devastated by climate change we don’t really get enough sense of how the economy works except that the rich seem to own all the water. The Child’s home with all the wonderful food and colourful kids all desperate to be adopted by rich parents is so much a throwback to a kind of jolly hockeysticks and cream bun fiction that was prevalent in the 1950’s it doesn’t quite gel. There is a good creepy yarn here and Kit and Devin are wonderful characters, there’s even a psychic pig – but it’s too cute for dystopian fiction but probably perfect for hungry ten year olds looking for a conspiracy.

Kit has long red hair, according to this customer review on Amazon.

until he meets this girl with long red hair and freckles on her face named Kit.

And the cover of the book shows a girl with red or brown hair running towards (or within) a corn maze. A blond-haired boy is also visible. 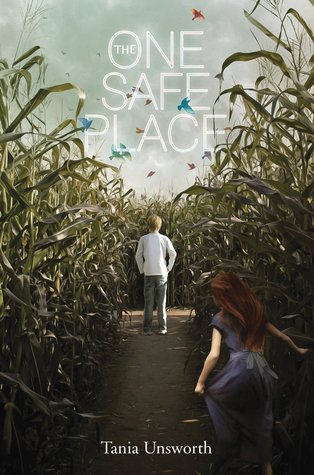 Neither the Goodreads synopsis, nort any of the reviews that I checked, mention anything about body swapping, presumably because it's supposed to be a plot twist. However, someone asked a story ID question about this on Goodreads, and their description of the plot did specify that older people were switching bodies with the kids in the orphanage. The description also mentions that there was a barrier around the orphanage, and that the kids tried to send a pet pig through it.

About 6 or 7 years ago, I read a MG/YA book. I believe it had a redhead girl and a boy going into a maze on the cover.

The MC was a young boy, maybe 12? He used to live on a farm with his grandfather, but the grandfather died. The boy was left on his own, and he eventually was found by this red haired girl. She was a recruitment person for this orphanage, and she brought him to the orphanage. It was like a children's paradise. After a bit, it became clear that something was going on. Every once in a while, the kids would act strange and revert to a younger age. Children would get 'adopted', and pictures of them in their 'new homes' would be hung up on the wall, but something was wrong with the pictures.

He eventually discovered that the owner of the orphanage was selling the kids to old people. They would switch bodies, and the old person would be able to be young again. The main boy was switched with an old man, but he stayed conscious through the process. He eventually ganged up with other kids in order to escape. There was a protective barrier around the orphanage that the children couldn't pass through. There was also a pet pig for some reason, and they painted the pig and tried to send it through the barrier.

18
Old SF novel about a white-haired young woman, alien or half-alien, who tutors human kids
6
Film about two delusional kids (a boy and a girl) who are singled out and make up their own world in a forest
3
Anime with kids deemed dangerous to humans because of their abilities, protected by a centuries-old man who can transform into a monster
4
Book about a set of parents who undergo a body swap with their kids while traveling through the Bermuda Triangle
4
YA book series about a teenage dragon
19
Old kids show from the 80's about two kids with a magical compass that took them to another world
6
Kids Book series - Girl babysits a family of monsters
6
Book where a boy moves to a town where only young kids are superheroes
7
Young Adult series/trilogy about nefarious plot to transfer memories from rich people with disabled/dying bodies to young donor bodies