Zombie World and the main character has a leveling type system

The beginning of the manga starts with our main character in a room hiding for his life. Our main character is a bigger guy that is short, weak, and has nothing really going for him. He is hiding because outside is the zombie apocalypse and the world is falling into ruin. He ends up letting 3 guys into the place where he is hiding because he is friendly but they are total scumbags and kick him out to fend for himself.

Our main character then gains the system which says it will help him survive and become stronger. After killing a couple zombies and seeing these orbs of light fly toward him he realizes that every time he kills a zombie he absorbs some of their strength. His goal now that he is stronger is to go and save a woman who I believe is a professor or some faculty to a university.

On the way he meets another girl trapped in a building who was always mean to him but now he is stronger she tries to screw him over and get him eaten by zombies however that plan does not work. It is later revealed that this girl's father has power in the military. He saves a different girl other than the one that tries to screw him over and decides it is time to go and save his crush.

He goes to save his crush with the woman he saved following behind him. After he and his crush he push out the building, or something along those lines, he keeps killing zombies and the system says to him that it is time for him to evolve. However to evolve he needs someone from the opposite sex that is infected, which turns out to be the woman he has a crush on. He evolves and through that process also cures her of the zombie disease.

This is definitely I Am Picking up Attributes and Items in Last Days.

When the zombies started appearing, everyone is at risk, Yang Hao forced to seek help in risk, in danger I found " pick up attributes system" acquired strength attribute, strength +1, acquired agility attribute, agility +1, I picked up? From today onwards, food, resources, beautiful girls, this land, all are mine! Yang Hao screamed! below me are all zombies….. a path to?

The story begins just as you described, with a short, somewhat chubby guy hiding in a university mailroom during a zombie apocalypse, accompanied by three other guys he allowed to stay in the room with him. They then turn on him after his food supply runs out, and kick him out of the room.

When he first encounters a zombie outside, he kills it with a broom and discovers that he's gained an "attributes picking system," which essentially means that he gets stronger every time he kills a zombie. After killing plenty of zombies, he gains a "body shaping" upgrade that improves his physique.

He also encounters the various women you mentioned, including the one he had a crush on. She gets bitten by a zombie at one point, but he's able to cleanse her of the virus using another one of his upgrades. 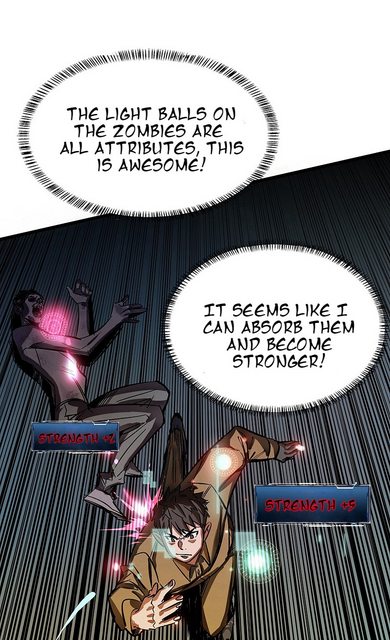 Not the answer you're looking for? Browse other questions tagged story-identification manga zombie-apocalypse or ask your own question.