I played this game sometime in the mid to late 90s. It was a turn based game of area control of a cyberpunk city, depicted in a low-res, grayscale 2d image. The city was segmented into squares (I think 8x8).

The objective was to defeat the other factions by hiring gangs, possibly outfitting them and sending them to capture squares. Captured squares gave income of some kind.

If a gang encountered a rival factions gang there was some behind the scenes maths to determine who would win, and the battle played out as short animation of the attack animation of the gangs.

Different equipment had different animations, I distinctly remember a mono-filament sword that cut the entire animation in half.

Chaos Overlords is set in a dystopian cyberpunk future. By 2046, private industries started to purchase bankrupt national governments. By 2050, all governments had merged under one corporation, the World United Solidarity (WUS). WUS became a corrupt monopoly, and attempted to control the population by instituting censorship and banning ownership of weapons, drugs and pornography. Former crime lords and corporate heads arose to exploit the people by creating "chaos": selling drugs, guns, and pornography, running the numbers, and engaging in extortion and blackmail. These criminals, known as Chaos Overlords, bribed WUS to avoid crackdowns. As gangs joined them and they grew in power, cities became battlegrounds for their struggles to destroy each other in pursuit of money and power. 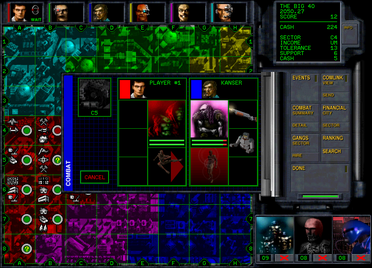 You can see the gameplay and combat in this YouTube video: