I've been looking for this anime for a while now. It is about a group of friends in high school. One of the boys is quite smart at coding and is trying to get their friend (a girl) out from another dimension, where she is stuck.

In the dimension she has to hide and fight to survive from robots. They have red lasers as eyes and run super fast on stick like legs. The girl is very weak and they are desperate to save her.

I also think they are trying to close some kind of portal to save the world from the robots.

While this is tropey, it could match Code Lyoko (2003). It's a French cartoon though, not an anime.

Jeremy Belpois, a 12-year-old prodigy attending boarding school at Kadic Academy, discovers a quantum supercomputer in an abandoned factory near his school. Upon activating it, he discovers a virtual world called Lyoko with an artificially intelligent girl named Aelita trapped inside it. Jeremy learns of X.A.N.A., a fully autonomous, malevolent, and highly intelligent multi-agent system, that also dwells within the Supercomputer. Using Lyoko's powers, X.A.N.A can possess electronics and objects in the real world like a virus to wreak havoc. X.A.N.A.'s primary objective is to eliminate anyone aware of the Supercomputer's existence so that it will be free to conquer the real world and destroy all humanity.

Jeremy works tirelessly to materialize Aelita into the real world and stop attacks caused by X.A.N.A. Jeremy is aided by his three friends Odd Della Robbia, Ulrich Stern, and Yumi Ishiyama, who are virtualized into Lyoko to save both worlds from the sinister virtual entity.

Pink-themed Aelita can be seen at 0'35 in the opening

The monster could be any one in these... Krabs and tarantulas both have long legs, and all have X.A.N.A.'s target symbol as their "eye": 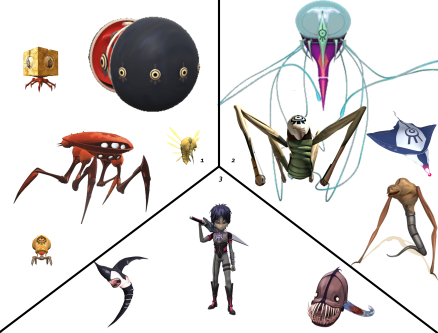 3
Old anime show with pirate, princess, and boy
5
Cartoon with boys on holiday in a fishing village find a pearl-activated portal to another dimension
5
Mecha anime where 2 girls fight with mechas
7
Old anime: main character can slow down time and move really fast
4
Anime in which 4 school children go into a game and rescue the world; they meet a pink-haired girl inside the game who helps them
32
Manga about a female worker who got dragged into another world together with this high school girl and she was just told she's not needed anymore
6
Looking for an older maybe 20 year old Mech Anime
3
Old puppet kids show about a hot air balloon going to another dimension
12
Movie about tiny Leaf- and Stone-people and a human girl who gets shrunk down to their size and must save the kingdom