Name of YA fantasy book (1960s or 70s?) where siblings travel back through time to save grandparent from a fire

Have been hoping to find this book again: read it a lot as a tween back in the early 70s.

A brother & sister travel back in time to save their grandparent from a fire that engulfed a former wing of the home that they are now coincidently living in.

I think their mother has just become a sexton for a church (no father in the book that I recall, may or may not have a much younger sibling) and the siblings find some sort of message in a cupboard/pantry (or maybe an old book in a bookshelf) that tells them how to travel back to the night of the fire -- but it has to be on a specific date and a specific time of day and of course they have to have certain objects with them. And they only have one chance to do this right.

I think they use a sundial in the overgrown garden as a touchpoint -- and I vividly recall that they know they've travelled back through time because the wing of the house is suddenly intact, not just the foundation as in the siblings' time period.

Thanks for any help you can give: this book comes to mind every so often -- especially when I pass this one house in a town near ours. Its overgrown garden obscuring the west side of the house immediately conjures this story setting.

Could this be The Ghosts (1969) by Antonia Barber?

When Lucy sat in the attic, she thought she heard the sound of voices calling...

That's when she started to believe the rumors in the village that the old house was haunted. But no ghosts appeared - until the day Lucy and her brother Jamie stood in the garden and watched two pale figures, a girl and a boy, coming toward them.

That was the beginning of a strange and dangerous friendship between Lucy and Jamie and two children who had died a century before.

The ghost children desperately needed their help. But would Lucy and Jamie have the courage to venture into the past - and change the terrible events that had led to murder?

The Goodreads synopsis only mentions that the siblings went back in time to save two children who appeared to them as ghosts, and doesn't mention anything about a fire or a grandparent. However, the Wikipedia summary goes into more detail, clarifying that one of the two ghosts was actually the great-great-grandmother of the two siblings living in the present day, and that the siblings manage to save her from a fire started by her adoptive father.

The story opens with an elderly man visiting Mrs. Allen, a widow who lives with her three children Lucy, Jamie and her baby Benjamin, in Camden Town, London, England. He offers her a job as caretaker of an abandoned house, which belonged to the late Mr. Latimer, until the Blunden, Blunden and Claverton company can find the rightful owner. Mrs. Allen takes the job, despite the rumours of ghosts haunting the old house.

One day, Lucy is walking in the garden to explore and to pick flowers when she hears the ghosts calling her name. She goes closer, only to discover the ghosts in person: a teenage girl and her younger brother.

Lucy and Jamie return the next day to discuss with the ghosts. It turns out their uncle is trying to "get rid of them", or murder them, and they are travelling forwards in time in order to get help. The ghosts' names are Sara and Georgie Latimer.

By drinking an infusion of various leaves, made from a recipe that Sara provides, Lucy and Jamie go back in time with the ghosts to meet Mrs. Wickens, the housekeeper and mother to Bella who is to marry Sarah and Georgie's guardian, and Tom, the gardener's boy. The children also meet Mr. Blunden (who is believed to be the creator of Blunden, Blunden and Claverton company), who helps Jamie and Lucy rescue Sara and Georgie from a fire supposedly started by their drunk adoptive father.

In the end, Jamie and Mr. Blunden travel through the fire by holding hands, and because Mr.Blunden is the one who must suffer, Jamie will not have to. They save Georgie while Sara is safely outside.

In the end, a lawyer named Mr.Smith returns to the household. It turns out Sara married Tom (the gardener boy) and emigrated to America, whilst Georgie moved to Camden Town. According to a letter sent by Sara to Georgie, her great-grandson is the late Mr. Allen, Jamie and Lucy's father, so Jamie is considered heir to the house, being Sara Latimer's great-great-grandson.

Also, the cover prominently features a sundial, which is what caught my attention as I was searching for your book. 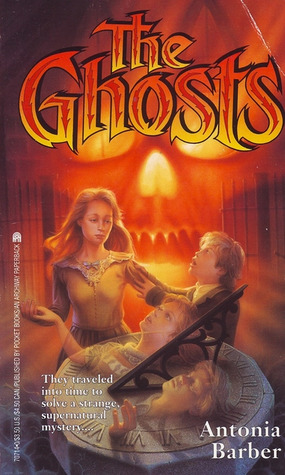 Somewhat similar to The Ghosts by Antonia Barber, and the film The Amazing Mr Blunden, which was based on the book.

I haven't read the book, but I have seen the film.

The film begins in 1918,2 where a war widow, Mrs. Allen (Dorothy Alison) and her children, Lucy (Lynne Frederick), Jamie (Garry Miller) and baby Benjamin are reduced to living in a squalid, Camden Town flat. ... The family are told there is an opportunity to become the caretakers of a derelict country mansion in the Home Counties named Langley Park, which was gutted by fire years before, and is now in the charge of the solicitors. ...
After they have settled into the new post, Lucy and Jamie see two ghostly figures in the grounds of the house: a teenage girl, Sara Latimer (Rosalyn Landor), and her younger brother, Georgie (Marc Granger).
... The children come to suspect that Mrs. Wickens (Diana Dors) and her disturbed violent husband (David Lodge) are plotting to kill them to get hold of Georgie's inheritance.
... Sara and Georgie find a book with instructions for travelling through time, so that they can get help. Lucy and Jamie agree to travel back with them; they arrange to meet Sara the next day. ... Jamie searches the graveyard, in the hope of finding nothing and being able to go back to help, knowing in advance that they will succeed. He and Lucy are shocked to find a gravestone marked with the names of both Sara and Georgie. The sexton explains that the two children died in a fire, whose anniversary turns out to be exactly a hundred years ago tomorrow.
[they save the children]
... Shortly after, the lawyer, Mr Clutterbuck (Graham Crowden), visits them and informs them that recently discovered documents show that Sara Latimer married Thomas and that their great-grandson was the late Mr. Allen. This makes Jamie the rightful heir to the Langley Park.

Not the answer you're looking for? Browse other questions tagged story-identification books time-travel young-adult or ask your own question.

8
Old book where heroine stepped on stones to travel through time
5
YA time travel book where a family skips forward through time
13
Looking for a time travel fantasy/scifi novel from the late 80s/Early 90s
7
YA novel about time travel and a strange box
10
Time Travel Book featuring dinosaurs, cave people, and children
6
Name of YA anthology book from late 80s about Time Travel
13
Three teenagers from the 80s unwillingly travel back in time to London during the Black Death