Short story about aliens, in contact with a middle schooler who feels doom approaching. At the end the aliens "wind down" Earth

This was a short story from an anthology (maybe one of those "Best Of" phone-sized books edited by Gardner Dozois?) somewhen between 2000 and 2005.

Aliens arrive as in the movie "Arrival" (silvery eggs land and hover and then nothing happens). They avoid direct contact. For some reason a middle schooler boy manages to connect to them telephantically and/or via dreams. As the story progresses, US scientists' efforts are contact are rebuffed. At some point the aliens just blow away a good part of the landscape to stop the Earthlings' pernicious disturbances. The middle schooler boy is haunted by visions of impending doom, queries his teacher about various items he's discussing with the aliens and discovers that the aliens want to blankslate Earth by "increasing entropy" (which is a bit vague as you can "increase entropy" in quite many ways). It is explained that the aliens regard the local biosphere as an irritant that just shouldn't be there. At the end of the story the boy dejectedly returns home from his last day at school and then "the aliens wind down Earth".

Ok, I found it after some cogitation and remembering that it might have appeared in "Geodesic Dreams", an collection of stories actually written by Gardner Dozois. ISFDB reveals that this particular anthology came out in 1992 (something is wrong with my subjective time assessment). The cover was different than the one given at ISFDB: 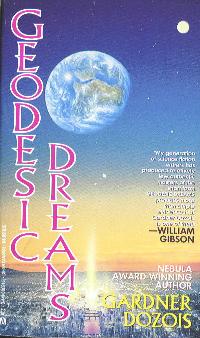 Here is a review of anthology.

The story in question is "Chains of the Sea" (1973-09, ISFDB) and there is more complexity to it than I remembered.

One of the longer stories in the collection, ‘Chains of the Sea’, from 1971, is one of the top stories. Silverberg singles out the high standard of the writing in the story, rightly enough. Two narratives intertwine, that of the aliens who land and the reactions to governments, humans, and the human-controlled (!) AI, and that of a young boy who has a ‘gift’ for seeing more around him than others. The tale of young Tommy is particularly well told, giving this reader concern for just how close the writer was to such events in his own childhood! The pacing of the story is excellent and the stories end together, neatly and elegantly and with no more information than is needed.

A search quickly brought up this review by Adam Kehoe with the intriguing title:

AATIP being the Advanced Aerospace Threat Identification Program, this story apparently is in the interest zone of UFOlogists.

I will just cite from Adam Kehoe's review:

It is a sort of double first contact story that centers around the arrival of alien ships, as well as a parallel but hidden intelligence on earth. Unlike most contact stories, there are at least four groups of sentient beings:

In brief, the plot focuses on a series of interactions with both aliens and "Other People" that decentralizes the agency and importance of human beings. As the alien objects land, humans quickly go through phases of reflexive secrecy, bewilderment, and eventually violence. As these events unfold, a dispassionate network of AI systems remain several steps ahead of their human counterparts.

"We’ve come to say goodbye," the Thant replied. "It is almost time for you all to be made not. The" — flick — "first phase of the Project was started this morning and the second phase began a little while ago. It should not take too long, Man, not more than a few days."

"Will it hurt?" Tommy asked.

"We do not think so, Man. We are" — and it flicked through his mind until it found a place where Mr. Brogan, the science teacher, was saying "entropy" to a colleague in the hall as Tommy walked by — "increasing entropy. That’s what makes everything fall apart, what" — flick — "makes an ice cube melt, what" — flick — "makes a cold glass get warm after a while. We are increasing entropy. Both our" — flick — "races live here, but yours uses this, the physical, more than ours. So we will not have to increase entropy much" — flick — "just a little, for a little while. You are more" — flick — "vulnerable to it than we are. It will not be long, Man."

This explanation is scientifically inaccurate, as "entropy" is just a measure (not something that you can apply) of the size of your current "uniform-enough" region of phase space, as described by Roger Penrose in "The Road to Reality" on p. 691:

Now I have to read it again.