I think I got this as part of a software bundle several years ago, although I'm uncertain as to how many years, probably over five. It was a puzzle game with 3d graphics. Cartoonish colors, if not style. In the game, you made your way through the levels with the help of your imaginary friend. I believe the child was small enough to fit through gaps while the monstrous imaginary friend was strong enough to move some blocks. The title was something like Gabba and Yoyo, alright that just brings up results for Yo Gabba Gabba.

I have this lingering feeling that the kid was Spanish or South American, and when reading up on the game, learning that he had difficulties with an alcoholic father, and that one of the theories for the game was that it was him hallucinating in a coma after being beaten, with his monstrous friend reflecting his perception of his father, alternately violent and kind.

Quico is a young Brazilian boy that has been abused by his alcoholic father. While hiding in his closet during one of his father's drunken rages, clutching his favorite toy, a robot doll named Lula, Quico discovers a strange chalk mark on the wall, and touching it, finds himself taken to a dream-like world. There, a young girl named Alejandra initially sees Quico as a threat, but comes to be a guide. Lula also becomes animated and helps guide Quico through the world.

Quico eventually comes upon a giant lumbering creature, simply known as Monster. Alejandra and Lula warn Quico about the dangers of Monster, but Quico finds the creature docile and playful. However, when Monster eats a frog, it becomes enraged, chasing after Quico until he can calm it with a rotten fruit. 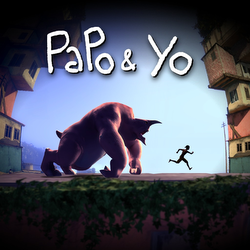