I read this somewhere in the late 1980s to the early 1990s, in black-and-white, maybe as part of a coloring book/activity book. Batman and Robin confront The Penguin and one of them is shot in the chest. I remember that the panel show the shot as being a fluid erupting from the umbrella's tip, but in retrospect, that might have been intended to be smoke, or my young brain (I was probably about 6-10 at the time) reversed the direction of things. What does stick out in my head was that the bad guy got away, after which the member of the duo who was not shot noted that they would be unable to get to a hospital before a storm (tropical storm? Hurricane?) hit, so they bandaged up the wound and tied both of them down (I think to a palm tree) to wait out the storm, with the final bit in the story having the one who was shot exiting the hospital with a bandaged torso, but alive and well.

In retrospect, I'm not 100% which one of them got shot... both make sense in my head, with the other tying them down during the storm, then getting them to a hospital. And it's possible that it might have been The Joker using The Penguin's umbrella. I have another vivid image of my head, possibly from another page in the book, with The Joker operating a drum set with a snub-nosed revolver hanging off one of the pins on the bass drum.

I believe the scene you've described is from the story "Four Birds of a Feather", originally published in Batman Vol 1 #11 (1942).

Robin is captured by the Penguin, and Batman is shot by one of his goons while attempting to ascertain Robin's location.

He subsequently rescues Robin, but the Penguin gets away, and Batman succumbs to the gunshot wound. Robin wants to take him to hospital, but they first need to wait out a tropical hurricane, so Robin ties both himself and Batman to a palm tree to prevent them from being swept away by the elements.

Robin subsequently takes Batman to hospital and apprehends the Penguin himself.

The story was later reprinted in a colouring book in 1976. 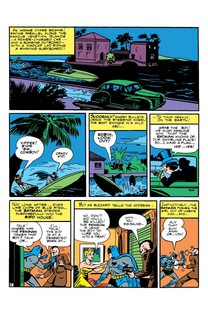 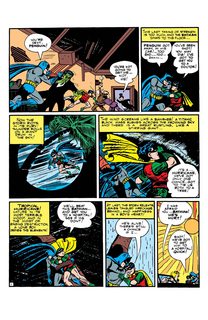 Not the answer you're looking for? Browse other questions tagged story-identification dc comics batman or ask your own question.

3
Help with identifying web comic with Batman and Robin
7
Story about collapse of civilization, which ends with two sisters (one of them a ballet dancer) and a baby leaving their house to live in the wild
9
Was there a comic where Batman and Robin were attached to a giant piano?
5
Searching for a Batman comic where Batman had no dialogue and Robin and Alfred were the primary characters
7
A book with two twins and a difficult relation, a room where time flows slower than the outside and a mysterious monster coming from a sink
10
Short story where aliens ask for Earth's help and ends with an alien being glad the Earthlings brought their moon with them
12
A 1970's TV space show where a creature with long tentacles mesmerized people close, pulled them underneath, and then shot them out dried up
12
Children's book set in the future with a strong vegetarian message where animals can now talk and eating them is forbidden