What is this creature seen at the TVA in episode 1 of Loki?

In season 1 episode 1 of Loki we see a cat in the TVA. Is it a normal cat or a Flerken as shown in Captain Marvel? 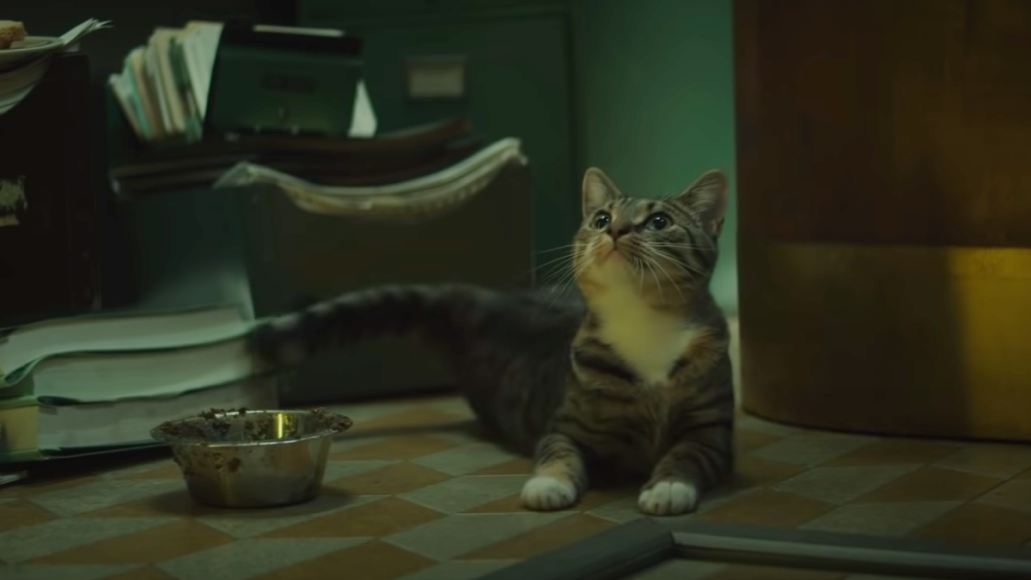 Ignoring my own comments on this not being answerable now I went looking to see if I could find anything about this "cat". Turns out in an interview with Salon, Kate Herron, director and executive producer for Loki, has called the creature a cat.

What did you envision as the look for "Loki"? There's so much going on, and the TVA has its own unique mix of styles that adds to Loki's and the viewers' disorientation.

Loki, for example, when he's arrested, he goes through these processing rooms. And Kasra was like, "Oh, we should make them cubes that he like falls through." And I thought that was so funny. And the idea of having the cat in one of them because I really wanted the TVA to feel like it was a real challenge because it's this office environment, but it exists outside of time and space. Something with me and Kasra was always talking about what how do we make this feel like a real, living, breathing office space.

Salon, The existential crisis of "Loki"

This does seem to be the likely case anyway given what we find out in episode 3 and confirmed in episode 4.

All of the people working for the TVA are variants. It makes sense that some might have some pets with them, whether subconsciously wanting them or otherwise, because we humans like keeping pets.

Loki: You're all Variants! Everyone who works at the TVA. The Time-Keepers didn't create you. They kidnapped you from the timeline, and erased your memories. Memories she can access through enchantment. So before this, you had a past, maybe you had a family, a life.

I will just end this with a disclaimer though: cats and flerkens (when in "normal" cat form) are, for the most part, indistinguishable to the eye for most people. Therefore, it could still be a flerken and Kate in the interview above might just not want to reveal that right now. If we ever see the creature again we might get an answer to this. Note that the TVA might also be more interested in a flerken than a regular cat but that remains to be seen.

20
Are all cats Flerkens?
14
What is the lifespan of a Flerken?
12
Who is this character in Loki?
40
In Loki, who is in this photo at the bottom of this box?
8
If the TVA exists outside of time, why are there still nexus events?
3
Does Loki exist both in the Sacred Timeline and the branched timeline simultaneously?
20
Why doesn't Loki look like a Frost Giant in the TVA?
17
What did Sylvie mean by this line in the Loki (2021) finale?
8
If the TVA exists outside of time, why would it be affected by the ending of episode 6?