Why Do Purebloods Call Muggle-Borns 'Mudbloods'?

‘No one asked your opinion, you filthy little Mudblood,’ [Draco] spat.

‘It’s about the most insulting thing he could think of,’ gasped Ron, coming back up. ‘Mudblood’s a really foul name for someone who was Muggle-born – you know, non-magic parents. [...] It’s a disgusting thing to call someone [...] Dirty blood, see. Common blood. It’s mad. Most wizards these days are half-blood anyway. If we hadn’t married Muggles we’d’ve died out.’

Why do purebloods call Muggleborns 'Mudblood'? When and how did this pejorative start?

I'm already aware of J.K. Rowling's parallel themes of Voldemort purging the Muggleborn and Half-bloods wizards and witches and the genocide of Nazi Germany¹ and that's not the topic I'm looking for an answer from. If it's relevant to your answer in a couple of places, though, that's fine. What I'm asking here is whether or not there is a history behind the word 'Mudblood', and, if so, what is it? Or is 'Mudblood' a more recent term, perhaps having come in style in the 20th century? As well, I'm already aware that 'Mudblood' means 'dirty blood'.

★ I'm looking for a canon-based answer (the Harry Potter Novels, the three supplemental books, JKR interviews, and Pottermore) and do not prefer an answer from the HP Wikia or the Wikipedia. 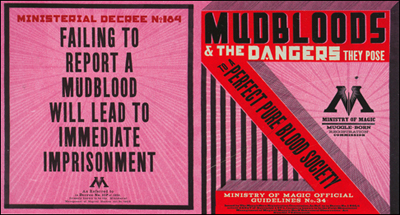 Though you call for canon answers, the origin of a word likely should start with its etymology in English.

Though it says that "pureblood" is recorded from 1882, using pure in reference to bloodlines is attested from the late 15th century, which is around 100 years before the etymology of "mud".

From The Tales of Beedle the Bard:

By the seventeenth century, any witch or wizard who chose to fraternise with Muggles became suspect, even an outcast in his or her own community. Among the many insults hurled at pro-Muggle witches and wizards (such fruity epithets as “Mudwallower”, “Dunglicker” and “Scumsucker” date from this period), was the charge of having weak or inferior magic.

Note that at this point, Dumbledore is not talking about wizards born with Muggle parents, so the word "Mudblood" most likely came after this point. We know from Ron that:

Most wizards these days are half-blood anyway. If we hadn’t married Muggles we’d’ve died out.”

It is doubtful that when Ron says most wizards are "half-blood" that he literally means half-wizard and half-Muggle but rather just that most have Muggle blood as well as "pure" blood.

Evidence does seems to point to this occurring recently, in my opinion most likely following or correlating with the persecution of "real life" witches by Muggles in the late seventeenth century. This is due to the fact that as Dumbledore's note states, witches and wizards who merely "chose to fraternise with Muggles" were being persecuted by their own kind as late as the early seventeenth century. It seems unlikely that at this time wizards/witches were marrying Muggles in order to not die out. Those events also were a likely catalyst for a need for witches/wizards to marry Muggles in order to preserve themselves.

Likely then, the origin of Mudblood occurred sometime at or around the end of the seventeenth century.

An interesting note: Upon doing the research for this question, I found a book "Gypsy Sorcery and Fortune Telling" by Charles Godfrey Leland, written in 1891 that uses "mud-blood" in a literal sense (dirt mixed with blood to create "mud-blood") for a gypsy ceremony. I just thought that the parallels between a "sorcery" filled Harry Potter universe and a book on "sorcery and fortune telling" were enough to merit a mention. If we want to take this book for "existing" within the Harry Potter universe, perhaps it is an indication of the earliest known recording of "mud-blood" in text.

By the seventeenth century, any witch or wizard who chose to fraternise with Muggles became suspect, even an outcast in his or her own community. Among the many insults hurled at pro-Muggle witches and wizards (such fruity epithets as “Mudwallower”, “Dunglicker” and “Scumsucker” date from this period), was the charge of having weak or inferior magic.

In 1675, Brutus [Malfoy] wrote: This we may state with certainty: any wizard who shows fondness for the society of Muggles is of low intelligence, with magic so feeble and pitiful that he can only feel himself superior if surrounded by Muggle pigmen

(src: "The tales of Beedle the Bard", Professor Dumbledore’s Notes on "The Wizard and the Hopping Pot").

You see that the association of pro-Muggle (and presumably Muggle-born) wizards with mud and pigs (which most likely relates to pigs wallowiung in mud) is as old as 17th century.

Admittedly, none of this explicitly mentioned Muggle-born, but the ethymology is clearly there.

Not the answer you're looking for? Browse other questions tagged harry-potter wizards or ask your own question.

5
Is there an equivalent slur to “Mudblood” for referring to Muggles?

31
Is a Squib a Muggle?
14
Did Draco Malfoy Buy His Way Onto the Slytherin Quidditch Team?
11
Why Did Colin Creevey's Muggle Camera Work at Hogwarts?
19
How Did Ginny Weasley Set the Basilisk on Muggleborns Without Getting Killed or Petrified?
15
Why Did Tom Riddle Want to Go After Mrs. Norris?
17
Why Was Hagrid's Wand Snapped?
24
How could the Basilisk tell if a student was Muggleborn?
18
Why did it take Voldemort thirteen years to figure out the resurrection potion?
25
Was Snape really prejudiced?
14
How could Malfoy openly use the term 'Mudblood' at Hogwarts?