But then again, the Borg. They have personal shields, but everyone else doesn't for some reason. Why can't Geordi or Data figure out how to create portable force fields by putting down things similar to those power poles placed in a triangular formation when they need to teleport into an "interfering" atmosphere?

Given that the primary purpose of Star Fleet is peaceful exploration and all that good stuff, I'd be willing to bet that the primary reason they don't wear any sort of armor is that it goes against that particular mission statement (e.g., "Hey dude... if you're here to talk peace, why are you wearing that big ol' suit of armor?"). Klingons are a battle-oriented people, thus they're always ready for battle. Same for the Borg: They know they're not the most popular kids on the playground, so they dress accordingly.

This seems like the best fit given the nature of the various races that wear armor: The Hirogen, the Cardassians, the Jem'Hadar, etc.

Personal shields are not outside the realm of technological knowhow in-universe. La Forge creates a subspace isolation field (TNG:Timescape), however, this also reveals the flaw in that technology, they appear to be fairly weak fields (La Forges is easily disrupted by the alien).

The other place we see personal shielding is in TNG:Lessons where Lt. Commander Daren used Thermal Deflector Units to protect the away team from the firestorms on Bersallis III. Again, even though the deflector units were reenforced with energy from hand phasers two team members were still killed when their unit failed.

It's about the power

These examples point to a plausible reason we don't see personal energy shields: power consumption. Generating a field may be easy but generating a field sufficient enough to defend against highly focused energy weapons or other harms is difficult.

What about the Borg? It's quite plausible that the Borg's advanced technology and cybernetic components allow them to generate the necessary energy to support such technology (it's worth noting that the Borg also don't employ energy weapons in close combat situations so there may be a tradeoff).

In all honesty, though, it seems quite likely that the weight and complexity of such personal armor or shielding would be worthwhile when combat was expected. However, we never get to see such "infantry" style combat in Star Trek.

Did we mention "We come in peace?"

Our Trek heroes are explorers, not soldiers, so to dress in heavily armed attire would be uncharacteristic. It's hard to believe "we come in peace" when you're wearing heavy armor. Klingons, however, are soldiers that prefer hand-to-hand combat so their armor is entirely appropriate.

This would likely be reflected in the type of technology researched and implemented so it would have less of a presence in the universe. It seems likely that Starfleet would have learned the lesson our current Earth has not yet learned. Highly militarized personnel tend to result in more violence and escalation of volatile situations.

The Starfleet Pajamas may be a lot of things but they certainly wouldn't feel intimidating.

Pattern Enhancers and their variable use

The questioner also mentioned the humble pattern enhancer, often use for variable purposes within the Trek universe. It does not seem to have been used for shielding purposes (although it, or a substantially similar device, was used in Time's Arrow to allow phase shifting in the alien cavern).

This actually might make a little "sci-fi science" sense, if you consider that even the Borg had to adapt to the energy weapons being used to effectively block them. It seems likely that in order to block all of the possible variations of energy weapons would have proven too difficult or energy intensive.

I'd like to add a small caveat: it does seem likely that special militarized units within Starfleet would find it worthwhile to find specialized implementations of energy shielding (a "burst shield" or a "assault shield" like the literal police/military shields). However, these would seem to be specialized requirements and outside the realm of normal training within the peaceful exploration mission of Starfleet.

There is also the Life Support Belt, but they were only on The Animated Series and some of the games. (Canonicity disputed)

Starfleet officers are exploration oriented... though, you would think that their uniforms would be comprised of superior metamaterials that are easily programmable and have fully integrated technologies into the fabric itself... by the 24th century, this type of technology should easily be possible.

No need to have a commbadge or a tricorder when your entire uniform comes with a plethora of networked subspace mini-sensors.

At any rate... personal weapons are indeed quite powerful to the point where they would probably render any personal protection useless. Even in the case of armors resistant to phasers or disruptors, those personal weapons can be modulated/adapted to penetrate those armors eventually.

We have seen in early TNG some security officers on Enterprise-D wearing protective armor, indicating it might be disruptor/phaser resistant. And who knows, maybe later SF uniforms are indeed designed with other materials that make them much more resistant to energy weapons.

As for personal force-fields... those should be powerful enough to protect against energy weapons actually as in DS9 prior to the Dominion War, we have heard admiralty talking about widespread distribution of personal-forcefields.

The instances we've seen personal force-fields fail was not because of power generation, but inherent instability of the environment they seemed to have been protecting the user from. The units LaForge rigged were done on the fly... they weren't specialized units that protect against temporal displacement... and, considering he had to rig them relatively fast, they did the job splendidly for protracted periods of time. Plus you have to keep in mind that you are protecting a user from a temporal field which is keeping the environment moving through time at an imperceptible rate... and there are probably variations in the temporal field that LaForge didn't account for which would limit the time you can spend in such an environment.

Plus, when Worf fashioned a personal force-field from a comm-badge, power generation was a problem yes, but only because he used a comm-badge and not an actual power cell for a personal shield.

In the case of Voyager... we've seen Seska using a personal force-field to enter a space inside a Kazon ship that was sealed off by Subspace force-field. Again, power generation wasn't the issue... she was manipulating sub-space as it was noted by Janeway, and that's rather delicate work - especially when you are also working with a radiation field that's excessively dangerous).

There are actually a few instances where we do see Starfleet personnel wearing body armour but it seems to be a question of personal choice (or possibly that differing ranks have different requirements to wear armour) since we also see people in the same scenes not wearing armour, usually when they're a ranking officer.

Chief Burke - DS9: Nor the Battle to the Strong 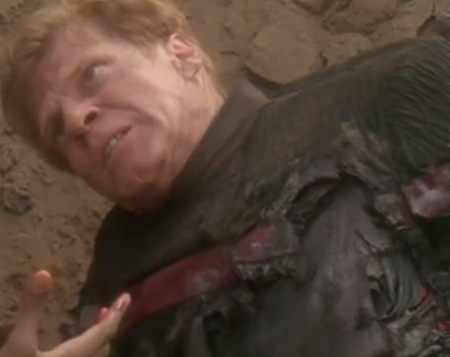 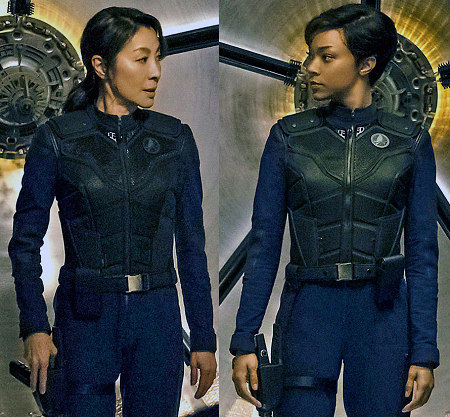 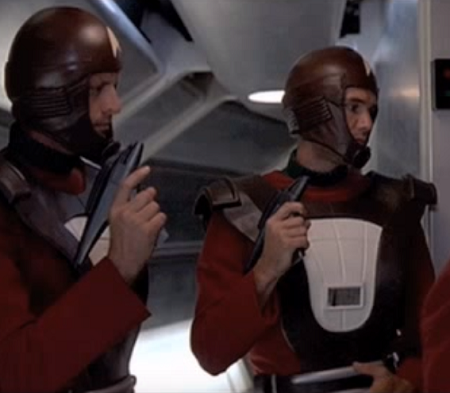 Regarding armor, the real question is why the Klingons, Romulans et al continue to use it when every Tom, Dick, and Harry* can phaser them to death in a single shot anyway. With the possible exception of the Jem'Hadar, I don't recall anyone's personal armor ever actually doing them any good on any of the shows.

As regards environmental suits, or at least more rugged uniforms, that I can't explain in-universe. (I can give you the out-of-universe explanation, which is that more costumes and props = more money that they didn't have.) Presumably the sensors can generally tell them if an area will need full-on isolation suits or not, but even so some basics like a hat, gloves, and decent boots or hiking shoes would seem to make their surface trips more comfortable, to say nothing of more productive.

*Voyager really needed a secondary character named Richard for the sake of this joke, but sadly I don't recall any existing.

Not the answer you're looking for? Browse other questions tagged star-trek star-trek-tng star-trek-voyager technology borg or ask your own question.

5
Why doesn't Star fleet utilize basic protective gear in hazardous environments?
1
Why are the Enterprise's away teams very lightly protected?
35
Why don't Starfleet ships default to having their shields up most of the time?
18
Why is Star Trek: The Animated Series not Canon?
22
Why doesn't Starfleet have personal shields?
11
Do "life support belts" exist outside of ST:TAS?

31
Is there a canon explanation for why Star Trek away teams don't wear environmental suits?
25
Why don't Starfleet vessels have intelligent on-board computers?
4
Why didn't they apply force on the primitive civilization which used to make Starfleet officers gladiators?
36
Why doesn't Seven of Nine wear a Starfleet uniform?
8
Since when are Geordi's parents both Starfleet officers?
6
When and why does an away-team member wear native clothing during negotiation?
6
Why do 'The Wiggles' appear to wear Starfleet uniforms?