Why did Odin cast Mjolnir to Earth?

In the first Thor movie, Odin banishes Thor to Earth because he is "unworthy." He then curses Mjolnir, Thor's weapon, to only be able to be wielded by someone he deems as worthy.

Having done this, why does Odin cast Mjolnir through the Bifrost to Earth? Was he intending for Thor to become worthy in his time there, or was he just throwing away Mjolnir? Do we know?

It was indeed a “test” for Thor to see if he would become worthy and so worthy to rule Asgard and return. We get a hint at this later on when Odin is talking to Frigga about it.

Frigga: You can bring him back.

Odin: No. His fate is in his own hands now.

To me this reads as Odin saying it’s up to Thor to change his ways and become worthy. Plus he casts the enchantment on Mjolnir before sending it through. Both pieces together solidify, to me, it was a test for Thor more than anything else.

According to the Guidebook to the Marvel Cinematic Universe - Marvel's Thor, Odin tossed Mjolnir to Earth after Thor, so that it'd be available to him when he'd learned humility.

Declaring Thor unworthy of Asgard and his title, power, and family, Odin stripped Thor of his armor and his hammer Mjolnir, and exiled Thor to Earth. Enchanting Mjolnir to be unmovable by any who were unworthy, Odin tossed the hammer after Thor so that it would be available when Thor learned humility. 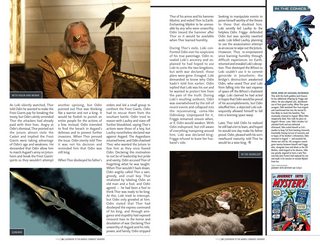 This is consistent with the comics, where it was likewise made clear that Odin sent Mjolnir to Earth, after banishing Thor there too, so that Thor could one day find it, when he'd proven himself worthy. 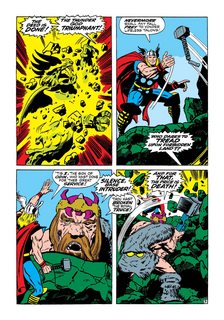 Odin also judged Thor to be vain and boastful in general, and decided to strip him of his hammer and powers and banish him to Earth, in order to teach him a lesson in humility. 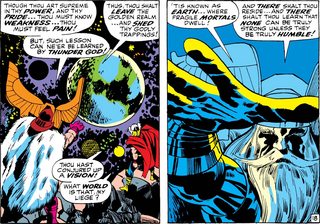 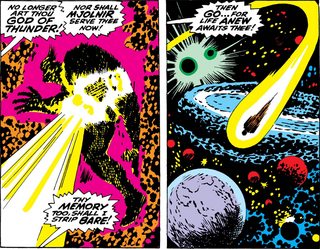 Odin then disguised Mjolnir as a cane and hid it in a cave in Norway, so that Thor could be guided to it, and regain his powers, when Odin deemed him worthy. 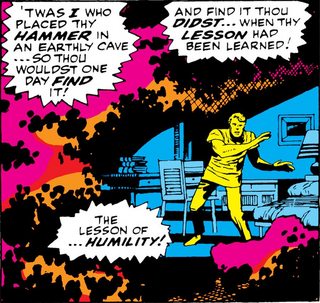 This sequence of events mirrors what we saw in the first movie, with Thor trespassing on the world of the Frost Giants against his father's orders, showing a lack of respect in the way that he spoke to his father subsequently, being stripped of his hammer and powers and banished to Earth as a consequence, but also being given the opportunity to regain Mjolnir if he proved himself worthy.

The one major difference between the comics version of the origin and the movie version is that in the comics, Odin also stripped Thor of his memories, and gave him a new body and identity as Dr. Donald Blake. Whereas in the movie, Don Blake was just an ex-boyfriend of Jane Foster, and Thor remained in his own body, fully aware of his identity as Thor.

But while the MCU writers changed that part, the two origins are otherwise similar enough that it seems clear that the movie version was loosely based on the comics version, and that Odin never intended the banishment to be permanent, in either version.

According to the film's novelisation, Odin didn't do this on a whim. He had carefully considered the nature and location of Thor's punishment and concluded that Midgard was the sole place he could learn suitable humility.

Odin did not act without thought. And he had thought through the past day’s events quite thoroughly. He knew what he had to do, even if it meant losing his son forever. Thor needed to learn to be a true king. He needed to learn compassion and humility and patience, and he couldn’t do that here in Asgard.

Thor needed to be stripped of his godly powers and sent to a realm where he would bleed and hurt like a mortal. He had to learn to put the needs of others before his own, so that he would be able to do the same for his people. There was no other choice. Thor needed to be sent to Midgard, the mortal realm whose people called it by another name: Earth.

Mjolnir going with him would be the test of his worthiness and would result in the return of his powers, and hence his worthiness to return to Asgard.

82
Why was Thor worthy to lift Mjolnir?

52
How does Mjolnir determine 'worth'?
54
Can Thor's hammer be wielded by anyone in outer space?
10
How was Loki able to visit Earth without using the Bifrost?
17
Does being worthy negate the weight of Mjolnir?
18
How would the Jotuns have made war on Asgard?
6
You can't wield Mjolnir unless you're worthy, but has anyone ever stopped Thor from wielding it?
3
What is the force that enables Mjolnir to return to the hand of Thor
56
Was Mjolnir ever used for building something?