Could Throg survive being locked in a jar?

It is known that Asgardians have an increased lifespan and higher physical endurance compared to that of normal humans. I was wondering if there are any similar displays of physical endurance for Throg, more specifically, I would like to know if his base-set abilities would theoretically allow him to survive being locked in a glass jar.

This question is inspired by an Easter egg in the fifth episode of the Loki Disney+ series.

Throg has the powers of Thor (or is Thor sometimes) and Thor can (or can't, depends on the writer) survive in space (so similar to a jar). One would assume the same is true of Throg and so it would entirely depend on the writer.

We first encounter Throg in Lockjaw and the Pet Avengers and we get a brief origin story. In short though Simon gets cursed to be a frog and joins a group of frogs who name him Puddlegulp. As Puddlegulp he fights alongside Thor who had been turned into a frog as well. Thor eventually leaves but a sliver of Mjolnir is left behind which Puddlegulp uses and when he accidentally hits it against the floor he is transformed into Throg. This sliver of Mjolnir turns into Frogjolnir and carries the same worthiness enchantment as Mjolnir:

Whosoever holds this hammer, if he be worthy, shall possess the power of... Thor 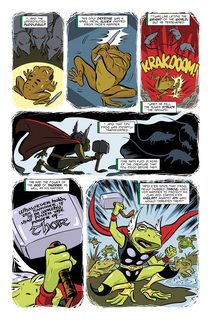 In Thor Annual Issue 6 we see Thor getting sent to space only to pass out and turn into an ice pop. However, he does survive this and is later rescued by the Guardians of the Galaxy. They believe he may have died had they not rescued him but they're unaware of who he is at that point so it is a bit unclear. 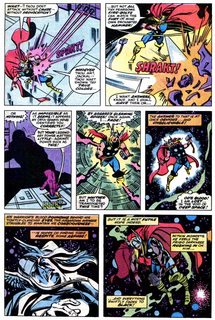 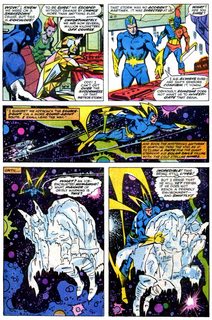 Note that Jim Salicrup spoke about this in Thor Issue 314 stating that Thor does indeed need to breathe and so whilst he can survive and will survive longer than others in space he may not survive forever there.

In THOR #306, page nine, panel two, Thor thinks, "There be time to reclaim the surface - and my breath."
And in THOR #305, page 21, panel one, Thor says, "Your cloak wraps about my face - stealing my breath!"
Why in the world would Thor need to breathe? I remember several instances where Thor was at the edge of the atmosphere or even in deep space without the benefit of air.

Ah, but Thor does indeed need to breathe, Matt! While it's true, that he can take a deep breath and withstand the hostile environment of space for a short time - as he during the Kree-Skrull War and the final battle against Thanos in AVENGERS - Thor is still a living being who needs to breathe! (For example of what happens when he's trapped in space without a breath, check out THOR ANNUAL #6.)

To talk about the MCU for a moment though. In it we have witnessed Thor survive the vacuum of space. In Avengers: Infinity War he does so after having been blown up on his ship by Thanos and later on at Nidavellir. There's also a few relevant instances in Thor and Thor: The Dark World. So with the fact that Throg in the MCU does indeed appear to be surviving in the jar plus Thor's relevant history I'd say MCU Throg can indeed survive in such an example.

Not the answer you're looking for? Browse other questions tagged marvel thor-marvel immortality .

25
Could Wolverine survive a nuclear bomb?
16
Does being worthy negate the weight of Mjolnir?
3
Could Reed Richards survive a point blank gunshot to the head?
3
Could Iron Man survive at the bottom of the Mariana Trench?
6
How could someone survive in the Quantum Realm?
13
Novel about immortality being kept secret by world leaders
9
How could Thanos survive this attack?
4
Did Thanos survive the Titan battle because he is a very powerful being?