I recall reading a sci-fi novel that was set on a desert planet where the main character was part of the technologically backwards inhabitants of the planet, however there were some (at least two, but possibly more) technologically advanced people that also lived on the planet as well, and were rulers who were treated by the people as gods or wizards or something like that.

The main character is a male non-tech-savvy inhabitant of the planet who starts living under the jurisdiction of one of these rulers, but during the story travels to the domain of a different one. He might have been a refugee, but I am not 100% sure on that part. He did travel with a group of other people, and he was the leader of the group as I recall. He also had a female love interest in the group with him.

When they arrived at the place where the other ruler lived, he saw that the landscaping included water features, and was impressed by that. He met with the other ruler, who told him about something called "Makers", which the ruler had created and which would inhabit his body and help it to fight sicknesses, and to repair itself. The word "Makers" seems to have been the rulers way of dumbing down the concept so that it was able to be understood by the main character.

I am not sure if the "Makers" were genetically engineered biological creatures, or if they were nanobots of some sort, but whatever they were, they did infect him, and after a slight initial sickness he then felt their effects positively because he healed quicker from injuries.

Other than that, I can remember that there was a sandstorm at one point in the story during which they all had to hide in tents and wait it out. The book must have been published at least 20 years ago, since as I recall I read it after finding it in a library discard sale some time around 2010.

The book is Hammerfall by C. J. Cherryh. The book was published in 2002 so it does match your time frame. 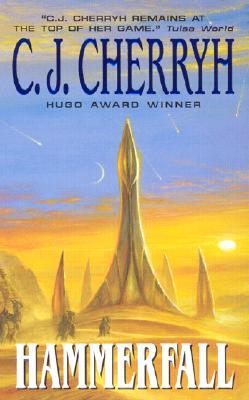 I recall very little of the book, but luckily as straycat points out in a comment there is a description of it on Wikipedia. The "Makers" are nanobots called nanoceles. The protagonist is Marak and his wife/love interest is Norit. The "other ruler" is called Luz and she does infect Marak's party with the nanoceles. After Marak has recovered from a fever Norit tells him:

“We are mad,” Norit said, having captured half a breath, “we are mad because we have these creatures in our blood. And they have them inside, too. Luz has them, very, very tiny, so tiny no eye can see; but they move through our blood and through our ears and our eyes and they make us have the visions. They make the fever. They heal us.

I don't recall water features in Luz's palace, but as I recall there is a large ornamental pool at the edge of the city.

The story is set on a desert planet and there are sandstorms a plenty so there are scenes where Marak is pinned down by a sandstorm. I have the book (though I have no memory of when I read it) so I can check other plot points if you want me to.

30
A short story of a guy on a strange alien planet
11
Book identification: a planet of poisonous plants where people live in the tops of trees
29
Looking for a story about a woman historian with a "useless" science fiction degree, accompanying star-traveling merchants
11
Comic book identification - lost astronauts, pocket watch, alien civilizations
6
Story identification: Protagonist with headaches on planet where he can heal everyone