Why doesn't Loki look like a Frost Giant in the TVA?

In a flashback scene in the movie Thor, we see Odin transforming Loki's appearance from that of a Frost Giant to that of an Asgardian (more here Why does Loki look like he does in the movies?). Moreover, in the same movie it is shown that Odin's spell is not immutable: Loki's appearance change back to his natural blue skin when a Frost Giant touched him and when Loki uses the Casket of Ancient Winters.

In Loki episode 1, when Loki tries to use his powers in the TVA, Ravonna tells him

Magic powers? They are no good in the TVA.

implying that magic cannot be used in there. Moreover, later in the episode it is shown that even the Infinity Stones don't work in the TVA and, recalling that the Stones bend reality, time and space, they seem in a certain way "stronger" than Odin's enchantment.

So when Loki enters the TVA shouldn't his appearance revert back to that of a Frost Giant?

The implication appears to be that Odin didn't simply cast an illusion on Loki but actually transformed him. This appears to be on a deeper level than most magic we've seen and it wasn't just an illusion that was cast. See Marvel Studios Visual Dictionary for reference: 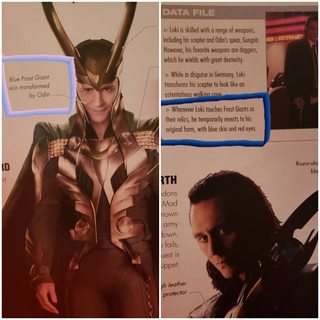 Whenever Loki touches Frost Giants or their relics, he temporarily reverts back to his original form, with blue skin and red eyes.

On top of that this magic lasted past Odin's and Loki's deaths meaning that it wasn't spell that needed upkeep but rather a one time and you're done deal. The implication from the quote you mention from episode 1 is that you can't cast magic in the TVA. Presumably anything done before entering will still stick around.

You'll note that this seem very similar to the runes Agatha and Wanda cast in WandaVision, it might be that the TVA is guarded by runes. I guess we'll find out in the finale.

Agatha: These are runes, Wanda. Only the witch that cast the runes can use her magic.

28
Why does Loki look like he does in the movies?

28
Why does Loki look like he does in the movies?
8
Is Kurse's sword poisoned or otherwise magically enhanced to cause inevitable death?
6
Why does the Time Variance Authority look like this?
6
Why isn't the staff of the TVA better armed？
8
What is this creature seen at the TVA in episode 1 of Loki?
0
Could Loki have used the Infinity Stones against Alioth?
4
Why does cartoon vs live-action Loki look so different?