Why did Gandalf change from blue to grey?

Everyone is familiar with Gandalf being described as "Gandalf the Grey", or, later, "Gandalf the White", and he was shown in both The Lord of the Rings and The Hobbit trilogies as being dressed from head-to-toe in the respective color. He was always dressed from head-to-toe in either grey or white (and sometimes seen with white sneakers on in the movies.) However, in The Hobbit book, in Chapter 1: An Unexpected Party, it describes Gandalf's attire as the following:

He had a tall pointed blue hat, a long grey cloak, a silver scarf over which his long white beard hung down below his waist, and immense black boots.

My question: Was he originally intended to be a sort of piebald Wizard, possibly before Tolkien created the concept of colored Wizards (Grey Wizard, White Wizard, Blue Wizards)? Or was he meant to be dressed in only partially grey?

Tolkien did not envision his wizards as wearing monochromatic outfits.

Towards the end of his life, circa 1970, Tolkien wrote an essay describing the appearance of the fellowship, in response to seeing a Pauline Baynes poster that he disliked.

Gandalf’s hat was wide-brimmed with a pointed conical crown, and it was blue; he wore a long grey cloak, but this would not reach much below his knees. It was of an elven silver-grey hue, though tarnished by wear – as is evident from the general use of grey in the book . . . But his colours were always white, silver-grey, and blue – except for the boots he wore when walking in the wild
Bodlien MSS Tolkien B61 a, fol. 1-31, quoted in The History of the Hobbit - "Bladorthin"

It should also be noted that the original inspiration for Gandalf was the Der Berggeist painting by Josef Madlener. (Humphrey Carpenter notes that "Tolkien preserved this postcard carefully, and long afterwards he wrote on the paper cover in which he kept it: 'Origin of Gandalf'".) The man depicted in the painting is not monochromatic either. 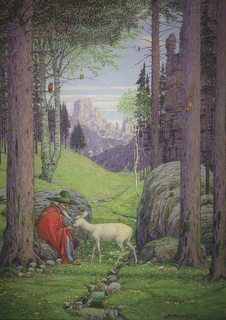 Tolkien writes about this painting:

The Berggeist has a green hat, and a scarlet cloak, blue stockings and light shoes. I altered the colours of hat and cloak to suit Gandalf, a wanderer in the wild, but I have no doubt that when at ease in a house he wore light blue stockings and shoes.
Bodlien MSS Tolkien B61 a, fol. 1-31, quoted in The Nature of Middle-earth

Furthermore, there was no stage in which Tolkien ever referred to Gandalf as "Gandalf the Blue". The passage cited from The Hobbit dates back (with one or two minor changes) to 1929, eleven years before the first appearance "Saramund the Grey" in an August 1940 outline to The Lord of the Rings. However the first color Tolkien associated with Gandalf was "the Grey".

A notable feature is the evolution of the 'colours' of the wizards, Gandalf, Saruman, and Radagast, which came to the final form in the course of the writing of this draft. Saruman is at first 'the Grey', becoming at once 'the White', and Radagast immediately takes on the epithet 'Grey'. But Gandalf then becomes 'the Grey', and Saruman calls Radagast 'the Brown'
The History of Middle-earth volume VII - The Treason of Isengard - Commentary to the fourth version of The Council of Elrond

Gandalf's appearance predates the concept of colored wizards, but Tolkien stuck to it even afterwards, and insisted that Gandalf should be drawn that way for Lord of the Rings art as well.

Not the answer you're looking for? Browse other questions tagged tolkiens-legendarium the-lord-of-the-rings the-hobbit adaptation-comparison gandalf or ask your own question.

57
Why did Saruman not kill Gandalf?
9
How does Gandalf the Grey escape from the clutches of Sauron at the end of The Hobbit - The Desolation of Smaug?
5
Why did Sauron flee from Dol Guldur when Gandalf first entered?
31
Who replaced Gandalf as the Grey Wizard?
107
Which seven kings does Saruman think Gandalf wants to control?
31
Did Tolkien create Gandalf the White out of regret for killing off Gandalf the Grey?
11
Did Gandalf the Grey sleep under hedgerows in the Shire?
6
Why does Tolkien make Thorin to be older than Balin, only to present Balin in the Hobbit as "very old-looking"?