Who truly is the character behind the TVA?

I tried to make the title spoiler free, but be warned that there are spoilers for the finale of the TV show Loki ahead!

In the finale, we see Sylvie and Loki reach a citadel at the end of time itself. Here, they meet a (human?) man who is only known as "He Who Remains," who tells them everything about why the TVA was created, how he's seen everything up to a specific point in time, and how order needs to be maintained in order to protect against multiversal war. While he is

murdered just before the end of the episode,

it's clear that he (or his multiversal versions) will have a lasting impression on "future" events in the MCU based on the final shot of the season, so I'd like to further figure out: who truly is "He Who Remains"?

Comic book spoilers are completely OK, but I'm asking this from the perspective of someone who has only seen the MCU.

“We knew that we wanted this show to be huge, and we wanted it to really end with a bang and have a huge impact on the MCU moving forward,” head writer Michael Waldron tells Marvel.com. “Knowing that Kang was probably going to be the next big cross-movie villain, and because he is a time-traveling, multiversal adversary, it just always made so much sense. I came up with that big multiversal war mythology and pitched it out in the room one day to our producers. And they said, yeah, let's go for it. We knew we were going to end up meeting the man behind the curtain. And then it was just on us to make sure that that meeting really delivered.”

“You had to leave a lot of meat on the bone in terms of how evil he could be, because that's He Who Remains' whole thing, that it's not me who you should be afraid of,” Waldron continues. “‘It's the other versions of me that are going to come.’ It was trying to really hint at that terrifying evil within without going all the way there.” In Waldon’s own words, he was just trying to write him as a “very charismatic sociopath.”

Marvel, ‘Loki’: Meet the Man Behind the Curtain, He Who Remains

So, a variant of He Who Remains, Kang, is going to be the next Big Bad for Phase 4 and beyond. This is pretty much confirmed at the end of the episode when we see a Kang statue in place of the fake TVA statues previously. Anything else about the upcoming character in MCU terms will have to wait to see what happens in Phase 4. 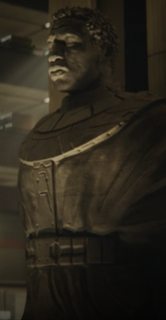 Note that He Who Remains is probably more of a good guy than a bad guy. Whilst what he's doing might be a bit dubious, his reasons for doing so are good. He's trying to save the universe from the bad versions of himself.

“I was quite excited that we got to show him because he is the one that brings it all [together],” director Kate Herron adds. “[He’s] the theme of our show. No one is completely good or completely bad, and people do fall into that gray area. I thought his reasoning with [Loki and Sylvie] that you can take me out, but I'll be back here anyway...you're going to awaken all these versions of me. And they are much scarier than me. I really believe him when he says that.”

Marvel, ‘Loki’: Meet the Man Behind the Curtain, He Who Remains

6
Why isn't the staff of the TVA better armed？
4
What are the different professions in TVA?
20
Why doesn't Loki look like a Frost Giant in the TVA?
25
Why was this offer even made, in the Loki Season 1 finale?
8
If the TVA exists outside of time, why would it be affected by the ending of episode 6?
13
Is the language of the TVA, He Who Remains, and all of the printed material in these places in English or Allspeak?
17
Is there a difference between timelines and universes in the MCU?
12
Why did the TVA arrest variants at all, instead of resetting them?
4
Can the Bifrost reach the TVA?