Who is the 4th Sentinel of Time whose statue is broken in the Citadel at the End of Time?

In Loki episode 6, as Loki and Sylvie go deep into the castle, they are in a room with three standing statues (dubbed "Sentinels of Time" by production designer Kasra Farahani) and one that's been demolished.

Whose statue is that? 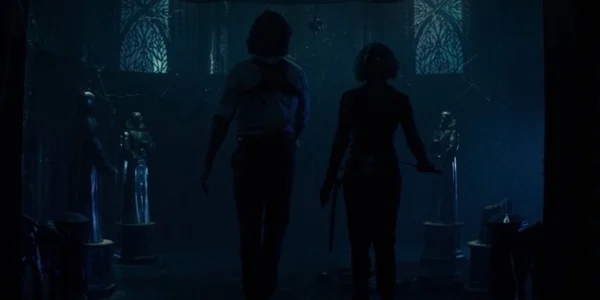 Borrowing from comics lore, and the Screen Rant video on easter eggs in the episode, that may be a reference to The Oracle of Siwa, the fourth Time Keeper created by He Who Remains, who rebelled and was exiled to ancient Egypt. In this case, since the Time Keepers were all animatronics, odds are there was no actual Ramades, but He Who Remains may have created his own mythology regarding the Time Keepers that included this fourth, exiled, member to be used if he needed to provide further backstory to the Time Keepers to members of the TVA. Or, simply, because he's very bored and enjoys making his stories.

8
Is Kurse's sword poisoned or otherwise magically enhanced to cause inevitable death?
30
Why does Wong laugh for the first time at the end of the movie?
5
How can Tina Minoru’s timeline be reconciled?
8
Which 1970s Spider-Man cartoon had sentient alternate dimension plants?
8
If the TVA exists outside of time, why are there still nexus events?
0
Could Loki have used the Infinity Stones against Alioth?
10
What is the Castle at the end of time known as?
10
Why is the stack of papers documenting “everything” Loki has “ever said” so small?