Why were the Infinity Stones powerless in the Time Variance Authority facility?

The Time Variance Authority has lots of Infinity Stones as shown in the first episode. The implication, if memory serves, was that Infinity Stones have no power in the TVA HQ.

As I understand it, Infinity Stones aren't supposed to have power outside of the universe in which they exist. The only reason they had power over Dormammu is that his universe and ours were connected for a bit. Maybe the TVA exists in an alternate universe?

My understanding is that the TVA exists outside of "reality" itself, or is its own reality all together. Thereby not making it another "universe", but something completely different all-together. A window from one reality, to another (or others) if you will.

A way of explaining it is that the TVA doesn't exist in same "space-time-continuum" as everyone else. They just pop in and out of it as necessary - trimming the nexus events of all realities as they deem necessary, in order to maintain the "proper flow of time".

In this way, I don't believe that the TVA is the "greatest power in the universe", rather it exists outside of the other realities - and does not follow the same rules. What is deemed as "powerful" in one reality, simply isn't in another, and vice versa.

In the comics the Infinity Stones only work in their own home universe. When they are outside of this home universe they're still glowing objects, but they lack the power to affect change on a significant scale, even when wielded by a powerful user or embedded into a gauntlet.

This, presumably is why the Infinity Stones at the TVA are treated as little more more than paperweights. Once their home timeline has been pruned, the stones no longer have any power and hence can be treated as mere baubles. There's also no risk that someone from the TVA could grab one (or all) of these stones, head back into the prime timeline and set themselves up as a god. 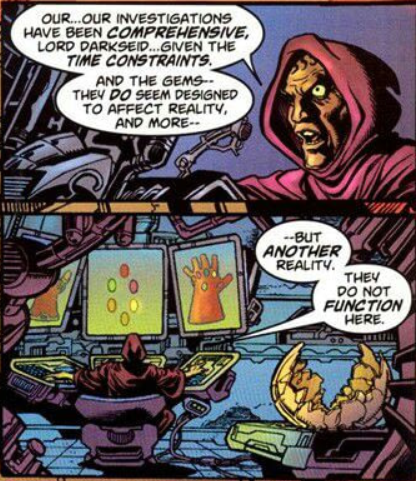 Outside of using the comics logic that the Infinity Stones can only be used in their home reality, as per my comment, it could be because the Infinity Stones are magic, and magic doesn't work inside the TVA, as both Loki and Sylvie learn, much to their chagrin. Yes, the MCU started out with the assertion that magic doesn't exist, just highly advanced alien and interdimensional technology, but as Arthur C. Clarke famously said, "Any sufficiently advanced technology is indistinguishable from magic", and it's entirely possible that the arcane technology that the Infinity Stones uses falls under the same prohibition of it functioning. This might also explain the retrofuturistic stylings of the TVA, as technology relating to particular dimensional properties just doesn't work there.

Not the answer you're looking for? Browse other questions tagged marvel marvel-cinematic-universe infinity-stones loki-2021 or ask your own question.

25
Does the Infinity Gauntlet from the comics work in other universes?
17
Is there a difference between timelines and universes in the MCU?

1
How come the Eye of Agamotto worked in the Dark Dimension?
63
Were all titans as powerful as Thanos?
4
Can the Infinity Stones be destroyed?
6
Why does the Time Variance Authority look like this?
0
Could Loki have used the Infinity Stones against Alioth?
10
What are the rules and logic for time travel set in Loki?
17
Is there a difference between timelines and universes in the MCU?
4
Can the Bifrost reach the TVA?