What is the Castle at the end of time known as?

In the Loki series we see that there is a castle at the end of time which was protected by Alioth. In that mysterious castle, we see that

He Who Remains lives.

What is the name of that castle, name of a similar castle at the end of time in comics is also valid?

It's repeatedly referred to as "The Citadel at the End of Time" (or just "The Citadel") in interviews with the show's staff.

Farahani recommends fans to rewatch the series and spot the citadel stone making its presence early on, pointing out that the statues in Judge Renslayer’s office, the front of the judge’s dais in the Time Court, and the elevator to the Time Keepers’ chamber, are all carved from the same stone. “This is the link from He Who Remains to the TVA — this rock that the whole place is quarried from,” says the production designer.

The Citadel at the End of Time is meant to punctuate He Who Remains’ position as “this sad, lonely figure rattling around a big empty space.” After all, the creator of the TVA had to stave off his other variants, culminating in the Mutiversal War. Achieving cosmic harmony is an arduous and solitary task. To reflect He Who Remains’ eons of isolation, Farahani remarks, “The thinking with the Citadel was that it was in ruins except for the office. He retreated from all the different parts of the Citadel, abandoned them, and just holed up in his office.”

Loki: Deconstructing He Who Remains’ Life’s Work at the Citadel at the End of Time

Interestingly, the structure seen in Thor Vol.1 #245 (mentioned above) was not the 'citadel' at the end of time, but rather a temple, hence the name of the story 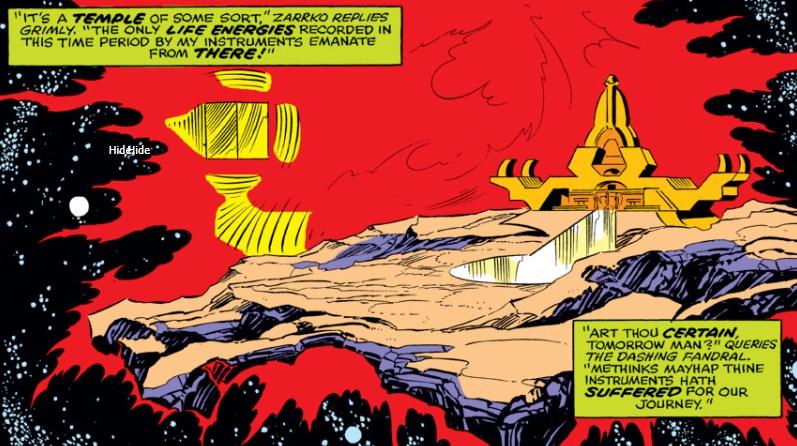 It is known as The Citadel at the End of Time. Loki actually calls it that in the episode as does Miss Minutes when they arrive:

Miss Minutes: Welcome to The Citadel at the End of Time.

Loki: We freed the Timeline. We found him beyond the storm. A Citadel at the End of Time. He's terrifying. He planned everything. He's seen everything. He knows everything.

8
If the TVA exists outside of time, why are there still nexus events?
13
What does this word written on Avengers Tower signify?
11
Who truly is the character behind the TVA?
11
How did the Loki Variants know Alioth's name?
0
Could Loki have used the Infinity Stones against Alioth?
25
Why was this offer even made, in the Loki Season 1 finale?
8
How does killing He Who Remains in the future change the past?
10
What are the rules and logic for time travel set in Loki?