Animated TV show where a boy summons a forbidden monster. His friends (a boy and a girl) can also summon creatures [duplicate]

Ask Question
Asked 6 months ago
Active 6 months ago
Viewed 800 times
4
This question already has an answer here:
Cartoon TV Show About Three Kids and Monsters and a "veil" between realms (1 answer)
Closed 6 months ago.

The show was about this kid who is the main character. He has black hair (I think) and summons some sort of fire bull-like creature from a book. I am pretty sure that he was not supposed to summon it, because I think it was forbidden.

There was also a blonde girl who can summon dark creatures and another boy who I think has black (or brown) hair and can summon bug-like creatures.

At one point some light master betrays them.

Kaijudo is a 2012 American animated series and trading card game that serve as a spin-off and relaunch of the Japanese Duel Masters franchise. The animated series was produced by Hasbro Studios, animated by Moi Animation in South Korea, and developed by Henry Gilroy and Andrew R. Robinson for Wizards of the Coast.

The series follows the adventures of a young boy named Ray Okamoto from San Campion who possesses the rare ability to summon and duel alongside fantastical creatures from a parallel dimension. Ray and his two best friends Allie and Gabe join the ranks of the mysterious Duel Masters to ensure the survival of both races.

The main character, Ray, has mostly-black hair, and can summon a creature called Tatsurion the Unchained, a quadrupedal fire beast with horns and a tail. There's also a blonde girl, Allie, and another boy, Gabe, who can summon creatures of their own. 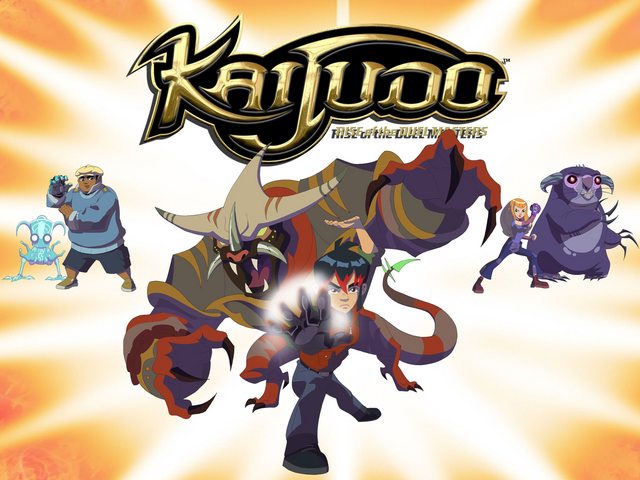 The light master you referred to might be Master Nigel Brightmore, a former Duel Master himself, and "an expert on the Light Civilization and its creatures," who ended up siding with The Choten, another former Duel Master, and the chief antagonist of the series.

Not the answer you're looking for? Browse other questions tagged story-identification tv animated-series or ask your own question.

8
Animated fantasy show about a red-haired girl and two boys
7
1990s (?) Animated sci-fi cartoon. Search for Indiana Jones lookalike
10
1970s Television horror show where a suit of armour comes to life and carries off a young boy
6
Looking for early 2000's show about teenage boy and girl stuck on an icy planet
10
Animated show with character who has a stone that summons creatures
1
Cartoon show with a blonde boy in a white shirt who found a necklace in a vase with which he can summon a creature