Are Knull's dragons symbiote-infected dragons or symbiotes in the form of dragons?

The "King in Black" event shows the Symbiote god Knull invading earth with his army of 100,000 Symbiote Dragons.

Are these dragons Symbiotes possessing dragon hosts, or are they Symbiotes (or something very like them) in the shape of dragons, with no hosts involved at all? 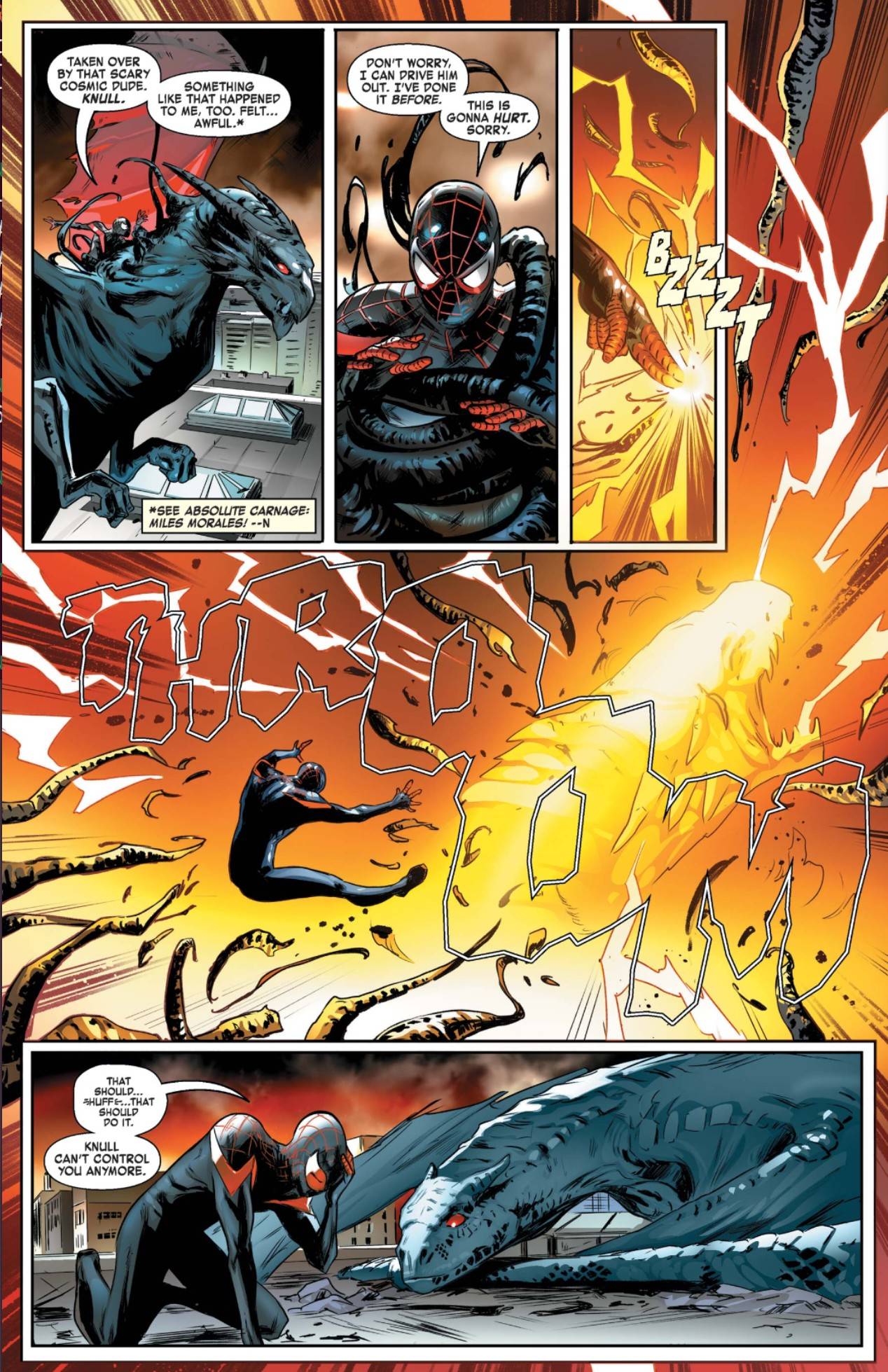 which seems to show Miles using a "Venom-blast" to free what looks like a regular dragon from the symbiote that was infecting it. Afterwards it is more friendly and has changed from black and red to uniform grey.

He has been shown using Venom Blast before (as cross references in the panel shown) during the "Absolute Carnage: Miles Morales" comic to drive off a symbiote, freeing the host, which seems like it is saying these are "normal" dragons infected with a symbiote.

However, in contrast to this: 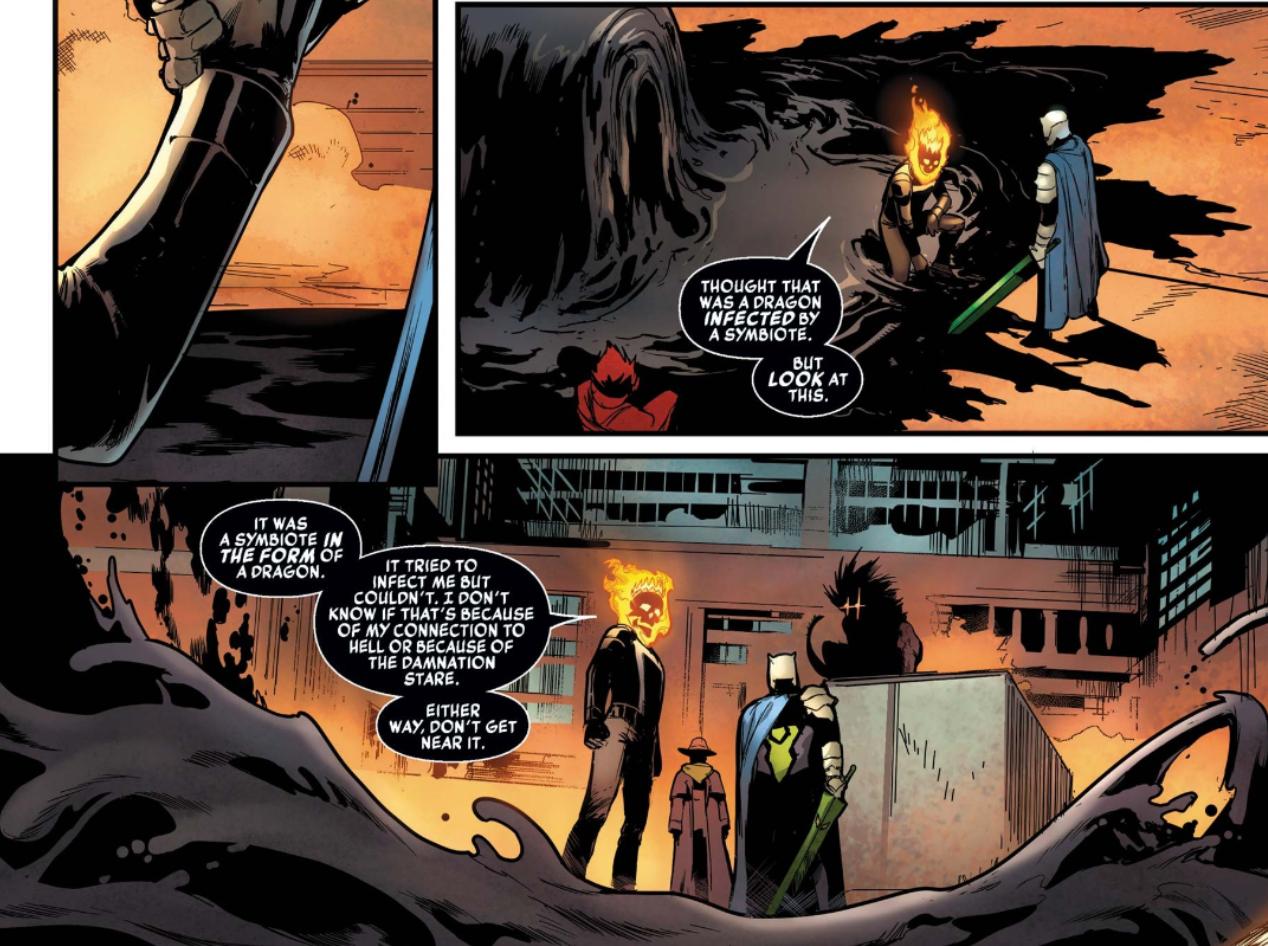 Thought that was a dragon infected by a symbiote. But look at this. It was a symbiote in the form of a dragon.

So are the dragons purely made of symbiote, or is there some host dragon underneath? Did one writing team not get the memo?

I think they are pure symbiote, just in the form of a dragon, like the Ghost Rider comic says.

In several other comics, in this "King in Black" arc we see dragons completely bisected, and otherwise exploded like they are made of symbiote goop. We see many times a symbiote pulled aways from people, but (with the possible exception of the Miles Morales comic in the OP) we never see that done to a dragon.

The Symbiote Dragons
Though their origins remain shrouded in mystery, the symbiote dragons were created to surged through space and destroy any life they encountered. Not shackled by vulnerabilities to sonics and fire (unless in the most extreme amounts), they even reached as far as the Milky Way galaxy and Earth's local solar system. Tormenting humankind, they served as inspiration for chapters of Earth's shared mythology and manifested Knull's wrathful will on an unsuspecting universe.

The Symbiotes Before Knull encountered Thor, he realized that his dragons would not be numerous enough to extinguish life in the universe and return it to its blissful state before the existence of the Celestials. So he began to experiment manipulating darkness into a living form. In time, Knull realized that rather than eradicating life, he could simply corrupt it.

The takeaway from this, is that Symbiote Dragons are from before Knull realized he could make the Symbiotes possess (i.e. corrupt) hosts. This strongly suggests that they do not have hosts.

It is possible some or all have gained hosts since, then. That happened also to be dragons, but Occam's Razor suggests they did not, and that the dragons are thus all symbiotes in the form of dragons.

A possible explanation for what was happening in the Miles Morales comic was the "Venom-blast" distrupted the connection to the hive/Knull, freeing that symbiote. As he says "Knull can't control you any more". He means only that, not "You are no longer infected, thus Knull can't control you any more". So the dragon afterwards was still a symbiote, just not one being controlled by Knull.

4
How can the Venom symbiote live off Electro?
6
Did the Venom symbiote inhabit the Hulk?
6
Is the only way a Symbiote can truly die, by choice?
8
Do the Marvel symbiotes canonically drain the life force from the user?
21
What does the Venom symbiote subsist on?
7
Why does the Symbiote need a host?
3
From where do the original Symbiotes from Klyntar get their names?
5
How did they capture all of the Symbiotes in the Venom movie?
10
Why did Miles Morales get non-spider-like powers (bio-electrokinesis and invisibility) that are vastly different from the other spider people?