I'm trying to remember the name and author of a short story I listened to in an audiobook; does anyone know it? It goes like this:

I've been going nuts trying to remember the name or author but for the life of me I can't.

It is The Repairman by Harry Harrison

This department is officially called Maintenance and Repair, when it really should be called trouble-shooting. Hyperspace beacons are made to last forever -- or damn close to it. When one of them breaks down, it is never an accident and repairing the thing is never a matter of just plugging in a new part. 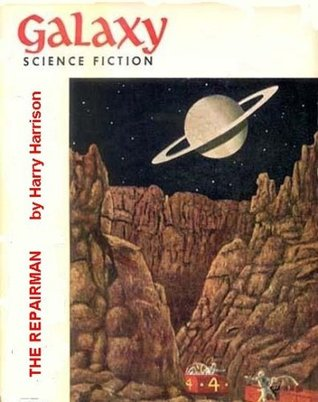 8
Collection of youth short stories about aliens 1990-1994ish
6
Children's sci-fi book with an alien named Yacob looking for a kid with technology
13
identify this book about a human turned into a god by aliens
5
Trying to find a space archeologist/explorer book I read once before, can't remember the name or author
19
Short story about a spaceship that meets an alien spaceship made of anti-matter
6
Looking for an older maybe 20 year old Mech Anime
54
Old story about two cultures living in the same city, but they are psychologically blind to each other's existence
15
Story about future special forces fighting nano-tech aliens
20
Space vampires and bounty hunters
6
Scifi book where boy finds he has telepathic/telekinetic power, becomes a slave and has to fight against others in arena as aliens champion/proxy