Has it ever been suggested that Natasha Romanoff is of the Romanoff Dynasty?

For reference, the House of Romanov

(also transcribed Romanoff; Russian: Рома́новы, tr. Románovy, IPA: [rɐˈmanəvɨ]) was the reigning imperial house of Russia from 1613 to 1917. They achieved prominence after the Tsarina, Anastasia Romanova, was married to the First Tsar of Russia, Ivan the Terrible.

Has there ever been a plotline where Natasha was implied to be a lost Romanov, or is it just a matter of someone picking an obviously Russian name ?

It's certainly implied on a number of occasions, but not explicitly confirmed.

In Black Widow: Origins #1, we have this panel. 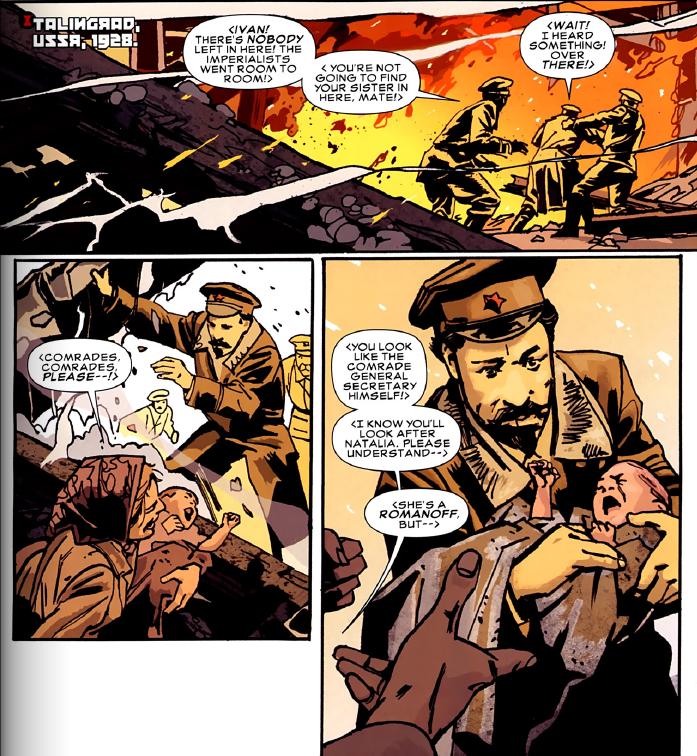 But then closely followed by someone (quite understandably) pointing out that this is a common name in Russia.

Note also that her official biography on Marvel.com does stress that it's never been conclusively demonstrated.

Although her exact parentage is unknown, it is rumored that she is related to the late Romanov dynasty—the former rulers of Russia—but those claims have so far been unproven. Orphaned as a child, she was rescued during an attack on Stalingrad by a man named Ivan Petrovitch Bezukhov, who looked after and trained the girl.

Not the answer you're looking for? Browse other questions tagged marvel black-widow or ask your own question.

28
What did Loki mean when he called Natasha (Black Widow) "Drakov's daughter"?
27
Has Thanos ever been defeated?
28
Are S.H.I.E.L.D. agents (e.g. Clint Barton, Natasha Romanoff) ever referred to by their comics aliases?
3
Has The Hulk ever been controlled using mind-control?
11
Has the ultimate destiny of Galactus ever been revealed?
3
Has Wolverine Ever Been Submerged?
9
Has Captain America ever been an ape/monkey?
8
Has Galactus ever been satiated?
23
Has Black Widow ever been imbued with Spider-Powers?