Did the Gelth realize the Doctor was a Time Lord, rather than a human?

In the Doctor Who episode "The Unquiet Dead", did the Gelth realize the Doctor was a Time Lord, rather than a human?

There's nothing in the Shooting Script that indicates an awareness that the Doctor is anything other than another (presumably human) body for them to inhabit. Their knowledge of Earth seems to be based on having had access to Gwyneth's consciousness, and she certainly hasn't given them any indication that there are other aliens on Earth.

"The more bodies! Convert them! Make them vessels for the Gelth!"

"We don't want your pity. We want this world and all its flesh"

Without occupying the Doctor, it's not really clear how they would even know that he was a different species, noting that he looks sufficiently similar to a human that he evidently passed standard examinations by a room full of highly trained doctors and nurses.

Interestingly, the Doctor mentions (in the Doctor Who: A History of Humankind book) that he's somewhat dubious about their tale of having been rendered bodiless by the Time War. I'll happily admit that this does beggar the question of whether they were playing on the Doctor's well known angst at having survived that conflict by mentioning it, or just got very lucky in speaking to someone who happens to know what the Great Time War was/is/will be. 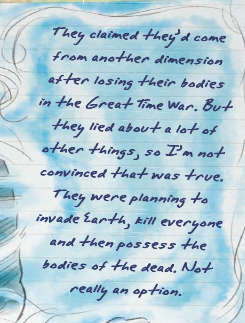 "They claimed they'd come from another dimension after losing their bodies in the Great Time War. But they lied about a lot of other things, so I'm not convinced that was true."

13
Doctor Who episode where the Doctor meets a Time Lord who mentions his real/nick name
31
Who exactly is the Valeyard, considering the events of Time of The Doctor?
3
Was PhiCorp using Time Lord technology?
9
How did the meta-crisis Doctor survive (or remain sane) when Doctor-Donna didn’t?
6
In Doctor Who, who is the oldest Time Lord?
4
Could a human being survive the lightning bolt that hit the Tenth Doctor in S3E4 "Evolution of the Daleks"?
12
Why didn't the Doctor become a vengeful God when he absorbed the Time Vortex?
9
If the Doctor was the last of the Time Lords, what happened to Susan?
4
Does the TARDIS contain Time Lord regeneration energy?