The main plot of the story is that all the different special forces (SAS, Royal Marines, Delta Force, GSG-9, etc.) are fighting aliens made from a sort of nanotech grey-goo. The alien goo is constantly learning and adapting to the soldiers weapons and tactics so the war is getting harder and harder. The soldiers all have lots of augmentations (cybernetics, etc.) in order for them to keep up with the aliens.

There are 2 books in the series - and I feel they were written in the last 20 years or so - I read them about 5 years ago.

Our story starts with our hero (an ex-SAS soldier) fighting in an underground fight-club. He still has all his augmentations but they are turned off as is required when he demobbed.

He wins his fight, and goes home where you discover that Earth society is very unequal - the haves live in tall towers, while the have-nots live on the streets (our hero is a have-not).

He gets propositioned by an guy (who's like military intelligence, or part of a corporation or something) to go and rescue or find....errr... something. He eventually agrees, and gets his augmentations switched back on.

The rest of the book is him doing this mission, and ending up with a bit of a team, but by the end he finds that the grey-goo aliens they've been fighting aren't aliens, but are actually created by the corporation.

Oh, and he gets really, really badly injured at the end of the book but somehow survives (at the end of book 2 you find out that's not actually true). The book ends with him and his team in a broken "alien" spaceship kinda just drifting in space.

They fix the spaceship and head back to Earth, having various adventures along the way. The one bit that stands out is he has to fight a guy (ex-Delta Force or something) with a mono-filament sword or whip or similar, that will cut through pretty-much anything. This guy joins his team afterwards.

Stuff happens, they end up back at Earth, and I think they end up destroying a space-elevator (I can't remember why, but it's important). Right at the end you (and the hero) discover the hero actually died at the end of the first book and is basically made of grey-goo now. I think he actually dies at this point too.

Sooo, if anyone knows what this book is that would be amazing - I've spent a couple of months trying to find it again, but my google-fu is letting me down. :(

The Veteran series by Gavin G. Smith. It is series of two books, which matches your description. The first book is Veteran and the second is War in Heaven. 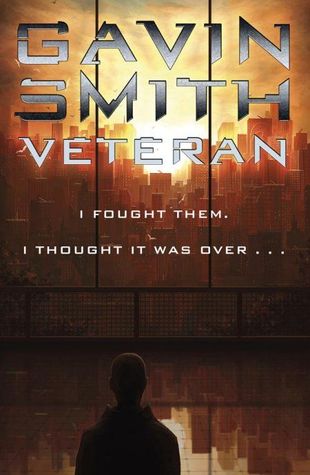 The protagonist is Jakob Douglas, and he is ex-special forces rather than ex-SAS. As you say, his augmentations were disabled when he left the special forces and he is now doing various security work and pit fighting for money. He is approached by his ex commander Rolleston and given no choice about returning to duty:

‘Nonsense, Jakob, mutineer or not you’re still a reservist.’ Major George Rolleston said, smiling again. ‘We have a code eleven, you’ve been reactivated.’ I barely gave this a second’s thought. A code eleven. XI. Xenomorphic Infiltration.

and threatened that if he refuses:

‘But Jakob, both Josephine and I are looking forward to working with you again,’ Rolleston said, and there was the threat, I thought. Josephine Bran, Rolleston’s pet killer, Royal Marine sniper, SBS with Rolleston and then seconded to Special Operations Command, someone that the other operators feared. A pale, quiet, unassuming girl, a shy girl who enjoyed and excelled at killing far too much, they called her the Grey Lady. She was the perfect servant for men such as Rolleston.

The alien nanotech is referred to as bio-nanites:

Hmm? Oh, yes, well, according to the diagnostics I’ve run it appears They are some kind of bio-technological construct. Though it is just possible that They have occurred naturally, or rather They have much more control over how They evolve. That would explain the different castes, the Ninjas and the Berserks.’ This was old news, it had been posited for some time. I couldn’t really see how it would help. ‘The technology is almost like naturally-occurring nanites, only it’s liquid. It’s difficult to say what these aliens are. The race itself could be the individual cells and each bioform may be a colony or even an entire civilisation of Them.’

Rannu is the guy with a monofilament weapon, but it's a garotte not a sword. He is an ex-Ghurka:

This kind of made sense. Many Ghurkhas were Hindus; I guessed that Rannu was one who’d gone bad. It explained the weighted monofilament I’d seen him use in Hull. The Thuggees’ signature weapon was a monofilament garrotte that they used to decapitate their victims.

9
Trying to find a book about a soldier that ends up fighting forever
8
Short story: colonization team gets invited to a festival/ritual by natives, later found dead after sending weird messages
11
Novel about aliens retrieving human hybrids pre-birth
21
Short story about two aliens meeting on Earth
13
A story about an alien race recruiting a human to try and fight star-extinguishing creatures
11
A children's or young adults' space opera series about war with aliens in the future