Why do all Ricks across the multiverse show an attachment towards Morty and no one else?

The Citadel of Ricks is home to Ricks from all possible realities. We see that every Rick always picks a Morty as his sidekick and not any other family member.

What is the reason for this? 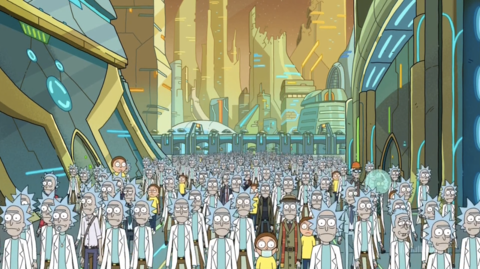 Every Rick in all possible realities have a Morty by their side because Mortys are sort of a camouflage. Ricks being on the run from the Galactic Federation needed to hide themselves. So, they use Morty.

This is addressed detail in Season 1 Episode 10:Close Rick-Counters of the Rick Kind when C-137 is being hunted by the Citadel of Ricks on charges of murdering other Ricks.

MORTY: You know, Rick, when I first saw all those Ricks and Mortys, I thought, "Gee, that kind of devalues our bond". But then I realized it just means that our relationship must be pretty special to span over all those different timelines.

RICK: Ricks have a very distinctive and traceable brain wave due to our genius. The best way to hide from an enemy's radar is to stand near someone with complementary brain waves that make ours invisible. See, when a Rick is with a Morty, the genius waves get canceled out by the, uh... Morty waves.

Although we cannot believe that C-137 was telling the truth here (he's known to lie a lot, after all), but, that's all we have got for now.

And to add, Ricks don't actually show an attachment towards Mortys. Mortys are more like a tool in their toolkits. As Morty so elegantly puts it:

MORTY: You don't care about me at all! I'm no different than that jacket you've got on! Y-y-y-- o-or your stupid portal gun! I'm just a tool! I-I-I'm just an object!
Season 1 Episode 10: Close Rick-Counters of the Rick Kind

This is why when the time comes, Ricks sacrifice Mortys. They experiment on them, genetically modify Mortys (hammerhead Morty, Lizard Morty, Drama implant Morty etc.). You get to see some of these in Season 2: Episode 4 (Total Rickall) when Morty reminds Rick of how to identify the alien parasites.

In all dimensions Morty has brain waves that complement and mask Rick's very traceable "genius" brainwaves.

RICK: Ricks have a very distinctive and traceable brain wave due to our genius. The best way to hide from an enemy's radar is to stand near someone with complementary brain waves that make ours invisible.

Although Rick Sanchez is not the most reliable source of information, especially when speaking to his grandson, we come across another Rick who's taken this camouflage to the next level*spoilers.

Given that Rick has used his Morty-powered camouflage dome to hide from the Council of Rick's it backs up what Rick C-137 has said about brain waves.

"Evil Rick" and "his" Morty began to murder Ricks and abduct hundreds of Mortys from multiple dimensions. The Mortys were imprisoned in a dimension of Evil Rick's design, with many of them hooked up to torture apparatuses so the "Morty waves" caused by the pain would hide from the Citadel of Ricks.

As for becoming similarly attached (as in taking them as a side kick) it seems like Summer is too much alike to Rick himself, which tends to ruin his plans (albeit occasionally for the better). For instance, in "A Rick Convenient Mort", she ruins his apocalypse crawl. Rick also has a larger influence on Summer than he does, Morty, bringing out her negative traits, whereas Morty requires much more pushing to break in this way. Also, she has a strong familial attachment, show both towards her own family and to starting a new one (See "Rickmancing the Stone"). These tendencies can and have interfered with Ricks plans.

Rick does not like Jerry, and makes this clear regularly, so it shouldn't take much more explanation why he is not Rick's first choice as sidekick. Beth is too precious for him to lose, so he's less inclined to take her on adventures. This is made abundantly clear in that he'd rather

Clone Beth, when she wants to go explore the universe

than lose her or restrict her freedom.

12
Are the Council of Ricks known by the general public?
4
In which dimension did Rick and Morty end up in after they Cronenberg'd their home dimension?
10
Rick & Morty: What's the difference between 'dimension', 'timeline', and 'reality'?
2
How did the Council of Ricks find the Rick they suspected for the murders?
3
Rick and Morty: Why doesn't the solar system explode in S3E4?
5
What prevents microverse inhabitants from leaving their own universes, and entering the ones containing them?
2
What does this joke mean in "Get Schwifty"?
11
Why couldn't Rick just use a micro sun to power his car?
2
What is the CGI show I'm thinking of that seems eerily similar to the Voltron episode of Rick and Morty?