What josei manga features a girl with eyes that change depending on her emotions?

MC is a girl with eyes that change depending on her emotions (it's a trait for all royalty).

She was a slave that was called evil and cursed because of her eyes.

Her real family find her after doing a bust on a noble that is using slaves (because slaves became illegal when the MC's dad became emperor).

I can't remember her hair color. I think it was golden but I don't remember.

Could this be My Three Tyrant Brothers? 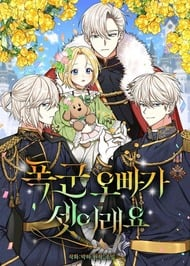 Given a name from the days of the week. As a slave she was called Wednesday. When she was on the verge of death because of a small revolt, "finally found you." Just overnight, I was told I have three older brothers. Apparently, I am the key to undo the curse on the Askanier Imperial Family.

This review, admittedly somewhat critical, mentions the color-changing eyes, and she does have golden hair.

A story about cursed royalty with mood-ring eyeballs, focused on a girl given Tragic Abused Slave Backstory #12, labeled as 'isekai' only because the author wanted to ride the 'isekai popularity train' when it's really no more than 'sometimes I dream that I lived in another world where there were things called 'planes' and 'cars' and I had a little brother' so... I mean, it counts, but not really.

Found with a search for manga slave "eyes change color"

6
Book series with a cover of a girl with unusual eyes, who receives a crystal ball
3
Manga: girl goes through a door leading to a prince, stacked books, and her appearance changes to a female version of the prince
2
Manga with a boy whose father was murdered (but is still around), living with a demon girl with magic hair
3
Manga about a girl who lives her life as if she was in a manga
3
manhua/manhwa: isekai, FL with redish/pinkish hair adopted by noble family
2
Manga where the red haired female character went back to time to change her fate
2
Looking for a manga or hentai about the son of a lord who reluctantly chooses his first slave on his birthday