In the manga this kid (he was young) was cast out by his family and found this book where he could make people/his own monsters (the people he made could talk and have their own specialties) and he made some teammates like that and one of them was super smart. I think the story was a reincarnation story. It was all black and white and he found the book in, I think, a basement he was locked in or thrown into but I'm not sure. Also, him finding the book was predestined, I think.

I've put the synopsis down the answer for you to check. 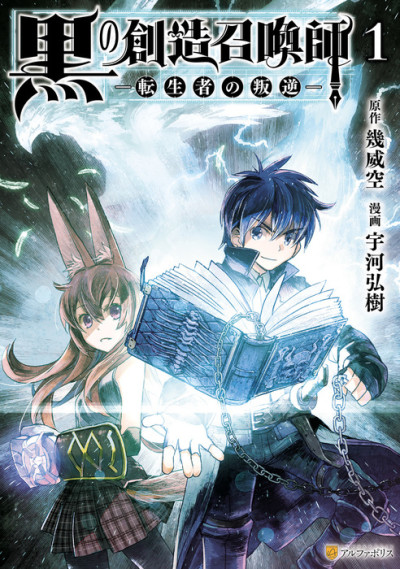 Due to a god's mistake, high schooler Tsuguna died before his time. In exchange, the god agreed to do him a favor in his next life. Tsuguna is reborn to a noble household in a world with magic. He has an unusual form of magic that he requested from the god, the ability to create summoned creatures. However, his dark Japanese hair and eyes mark him as a cursed child in this new world, and his powers are slow to appear. He's kept in a dark basement where he reads his family's books, until one day he finally uncovers the key to his powers. Finally, he can set off into the world with his summoned companion to level up his skills!

4
Book Series for MG/Children - About Kind/Gentle Alien Professor/Engineer Working in Basement Laboratory
5
Children's book about a boy with a benign tumor but then discovered the tumor was his twin absorbed in utero and still haunts him
6
Story about a princess who will become queen in the future, trying to find knights for her knights of the round
6
Manga in which a strong magician kept reincarnating so that he could finally be born with symbol suitable for magician?
7
Short story about reincarnation, where character is arrested for claiming to have once been Jesus
5
Isekai manga where a guy gets reincarnated as a nobleman's son and invents Othello
2
Isekai manga where the hero moves to another world and encounters a girl from his world that turns out to be his dad
3
Manga where the MC is transported to another world, becomes super powerful, and is subsequently visited in his home by the demon king
8
Short story where professional basketball players have the abilities of past superstars imprinted on them
5
Manga where a reincarnated(?) young boy has a maid and a wolf girl who he does business with